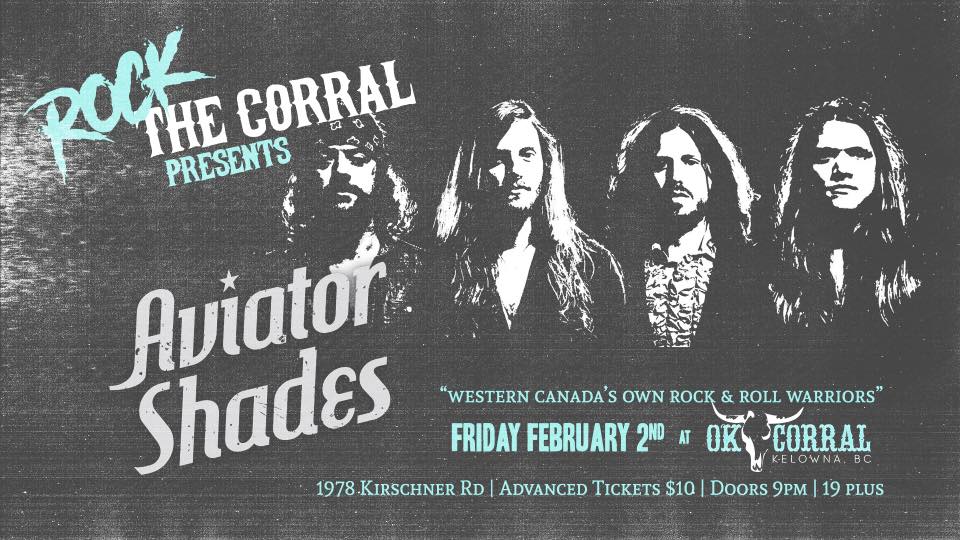 Meet Aviator Shades – a Classic Rock quartet from Vancouver whose catchy songs, strong work ethic, and tight-as-balls live show has taken them to the top of their local scene and headed towards national breakthrough. Since 2015 Aviator Shades has pulled off numerous national and regional tours, all the while winning over new audiences and supporting the likes of HALESTORM, APRIL WINE, MONSTER TRUCK, JUDAS PRIEST, WHITESNAKE, DANKO JONES, ECONOLINE CRUSH, THE ODDS, THE LAZYS , and many more. Their 2014 release “ Ready To Blow ” was produced by Danny Craig (One Bad Son, Default) and showcases a modern take on no nonsense classic hard rock in the spirit of Thin Lizzy, Deep Purple and UFO. Ready to Blow spawned the band’s first single, “Who Do You Think You Are” which was released to radio in 2015 and garnered adds across multiple Canadian provinces, eventually charting at #42 on Canadian Active Rock.

The lifeblood of the band is Irish born singer/songwriter Dave Gorman. Different incarnations of Aviator Shades had been gigging around Dublin and Vancouver, with the essential lineup finally taking shape in 2013. Guitarists Daniel James and George Baker, equally gifted lead players who complement each other’s playing magically, and drummer Spencer Tomlinson, whose thunderous drumming blends perfectly with Gorman’s grooving bass lines, round out Aviator Shades. Aviator Shades recently released their “THIS IS WHAT WE DO” EP, co-produced by the legendary Mike Fraser (AC/DC, Aerosmith) and Danny Craig and mixed by Fraser. The debut single from the release, “Burn it Down” hit #30 on the CAR charts and showed just how far the band’s sound has developed. The band enters 2018 at a new level and they will be ready to take on the world.