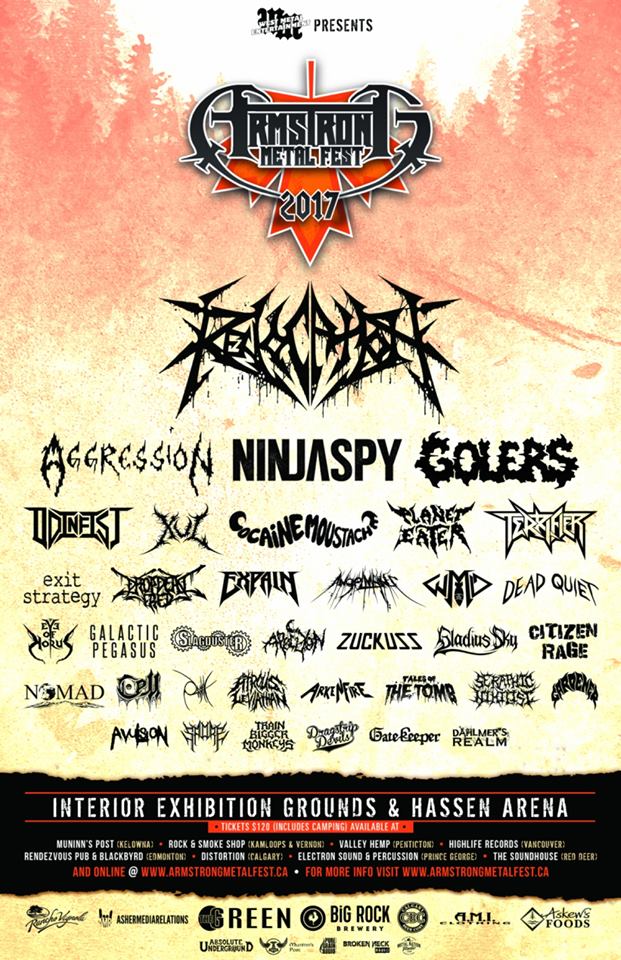 Nestled in the Okanagan valley, the town of Armstrong has become British Columbia’s largest mosh pit. Trembling the Rocky Mountains and creating a gathering of metalheads like no other in Western Canada, ARMSTRONG METALFEST, now in its ninth year returns with a 2017 line up that metal fans from across country will feast on from sunrise till way past sunset on July 14th and 15th at the Hassen Arena.This year’s headliners include Boston’s tech death / thrash titans REVOCATION, Vancouver’s ska-metal champions NINJASPY, Canadian 80’s thrash legends AGGRESSION and the Broken Neck Radio peoples choice winner GOLERS among many more from across the country. (full list below)Festival co-founder Jesse Valstar comments:“The team members of West Metal Entertainment poured their sweat and blood into making this year’s line up for Armstrong Metalfest the best year yet! A large portion of this year’s line up consists of bands who will be releasing albums in 2017. The fact that so many bands in Canada are able to write and record quality material is a real testament to the thriving metal scene we have. The band submission process is a grueling gauntlet of awesomeness, but personally I love every second I dedicate to the brilliant artists of Canadian Metal! I am especially excited to have Revocation on this year’s edition of Armstrong Metalfest. Their style is hella fitting for the festival and I know they will be well received! Also, their album “Great Is Our Sin” is fantastic front to back. I’ll be front row center screaming my heart out for sure! I am very proud of the work our team has put into year nine of Armstrong Metalfest. Our work is paying off, so far this year we have broken every record for ticket sales we have ever had. As a community we built this festival from the ground up. As the festival grows, so does our community. We are all proud of this big beautiful beast!”Weekend pass available for $120 CAD regular pre-sale with camping included in ticket price. Weekend of festival, the weekend pass will be $160 CAD at the festival gate. Day pass will be available at the festival gate only for $70 CAD. Camping is an additional $20 CAD for day pass per night. Please visit the following link for details and purchase: https://armstrongmetalfest.ca/tickets/  Confirmed for the fest is the following line-up:(day line-ups and set times will be revealed at a later date)AggressionAngelmakerApollyonArkenfireAtrous LeviathanCellCitizen RageCocaine MoustacheDahlmers RealmDead QuietDragstrips DevilsDrop Dead FredExit StrategyExpainEye of HorusGalactic PegasusGardenerGatekeeperGladius SkyGolersNinjaspyNomadOdinfistOssificPlanet EaterRevocationSerephic NihilistSlagdusterSporeTales of The TombTerrifierThe AvulsionTrain Bigger MonkeysW.M.D.XulZuckussAbout:Taking influence from Europe’s music festival circuit, Armstrong Metal Fest is a heavy metal celebration that encourages metal heads from across Canada and the globe to mosh and camp with the backdrop of great outdoors of British Columbia’s Okanagan Valley. What started as a backyard party in 2009 with nothing but eleven local metal bands such as Terrifier, Xul and Odinfist to name a few, has grown into a a huge success admired by the Western Canadian Metal scene. 2016 was the eighth year of the festival and was its largest year for music and attendance. Previous years of the festival have seen line ups with Cattle Decapitation, Suffocation, Beyond Creation, Dayglo Abortions, Rivers of Nihil, The Zenith Passage, Anciients, Bison BC, Striker, Crimson Shadows, Holy Grail, Archspire, Cryptopsy, Unleash The Archers, Divinity, Into Eternity, Ninjaspy, Vesperia, XUL, Odinfist, Death Toll Rising, Gomorrah among many others.For more info, please visit www.ArmstrongMetalFest.ca