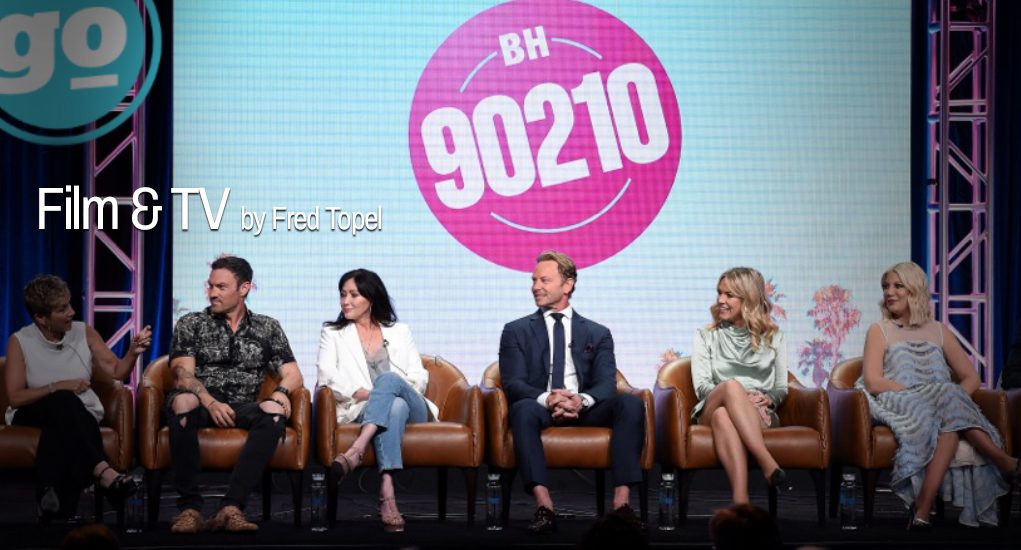 When every good TV show from the ‘90s starting coming back with their original casts, it was only a matter of time before Fox brought back Beverly Hills 90210. Shannen Doherty, Jason Priestley, Tori Spelling, Jennie Garth, Ian Ziering, Brian Austin Green and Gabrielle Carteris return, but with a twist. They’re not playing their high school characters as adults. They are playing themselves, actors who are famous from Beverly Hills 90210.

BH90210 has all the nostalgia for the teen drama classic with a meta comedy twist, and heart as we all realize why this show and the people who brought it to life meant so much to us. Gonzo spoke with Spelling, Garth, Doherty, Ziering and Green after they were on a Television Critics Association panel for BH90210. BH90210 airs Wednesday nights at 9 p.m. on Fox.

Gonzo: How did it feel to film the new opening titles 30 years later?

JG: Well, we did that at about 4 a.m. after working 16 hours I think, and it was weird. They put the music on really loud to try to wake us all up and then we ran around like crazy people in front of a white backdrop. And we had fun. We were just having a good time.

TS: It was fun. We did crazy hours and we were all really tired but we did it and it felt like old habit, just picking back up where you left off and doing our old moves.

IZ: It’s exciting. It was as though time folded in half and I got to revisit with all the fun that I had 29 years ago.

Gonzo: On the show, Shannen is off rescuing animals. When will she rejoin the gang?

SD: No, I mean, I filmed them in Vancouver. In the second episode, granted it’s on the phone with Brian but he was actually there on set with me.

BAG: It makes sense storyline wise once you see the whole thing.

BAG: At first it’s a little shocking. It’s a little like why the hell was this choice made? But then you watch the series, the six hopefully, and it makes sense.

SD: It all comes together.

Gonzo: Brian and Ian also played versions of themselves in the movie Domino. Was there any similarity creating a fictional version of yourselves for BH90210?

IZ: Oh no. No, no, no. This is a completely different me.

BAG: I’ve always been a big fan of comedy that is self-deprecating. I feel like Domino gave us a small chance to do that and I think that this gave us a longer chance to do that. That’s sort of what’s fun for me. I think it’s so easy to take yourself too seriously in what it is we do. At the end of the day, we’re entertainers so my way of entertaining people is through that, is just to be self-deprecating and be as human as possible, as I am. As we all are.

BAG: I thought Man on Fire was awesome. Domino was pretty good.

SD: I mean, Man on Fire is like one of the best movies ever made but Domino is fantastic. The late, great Tony Scott, I’m so jealous of that moment of him getting to work with Tony Scott. I really wanted that.

Gonzo: What was important for your version of Jennie?

JG: I just wanted her to be flawed and grounded and also represent sort of a sardonic point of view.

Gonzo: Is your friendship with Tori on the show based on your real friendship?

JG: Yeah, we’re best friends in real life. We co-created this show together and worked tirelessly for two years together. We have a very strong bond.

Gonzo: Tori, were you underestimated when you started producing?

TS: Uh, yeah. My whole life. Yeah, but not consciously. I don’t know. That’s probably my perception. I don’t know. I think it’s difficult as an actor to be taken seriously as a producer, as a woman. That’s what it really boils down to. You keep fighting for your beliefs.

Gonzo: Shannen, did the animal conservation come from your real life?

SD: Yeah, I think I’m really vocal about that. If you follow me or Instagram or read any interview about me, animal activism is one of the number one things in my life, along with obviously cancer, I’m working with Stand Up to Cancer and a couple of different [organizations.] So those are my two passions, probably more so than acting.

Gonzo: Did you ever consider a straight follow up where you’d just play the characters 19 years later?

Gonzo: Does this version give you more opportunity to comment on what 90210 meant to the world?

JG: It’s kind of representative of the advanced day and age, advanced thinking of today

Gonzo: Was Tori and Nate a spoof of the Tori and Dean you did with your husband?

TS: It was more trying to show that Tori’s stuck in the reality world. She wants to get back into acting. A spoof that Tori always does reality TV, but not my husband at all.

Gonzo: Ian, did it dawn on you in The Last Sharknado you said it’s time for a reboot, and here you are doing a reboot of 90210?

IZ: You know what? Sharknado ended but Zombie Tidal Wave starts August 17. So we’re all excited for that. This just happens to coincide. It’s a real big month for me. I couldn’t be more excited.

Gonzo: Zombies in a tidal wave? Are you starting to stretching credibility a little bit?

IZ: Credibility in terms of what? How can you stretch credibility on something that’s entertaining?

Gonzo: I was kidding. Is Zombie Tidal Wave in the same tone as Sharknado?