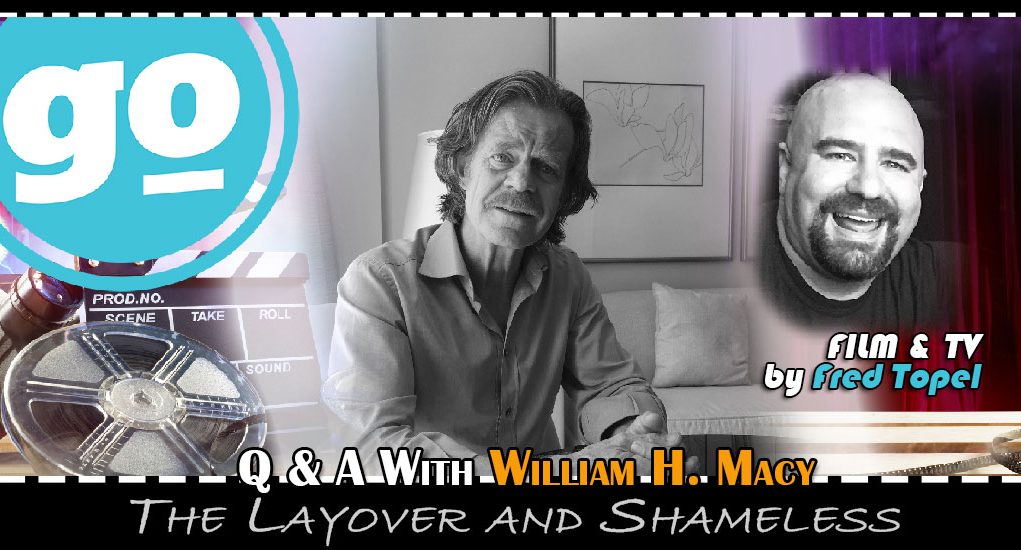 You know William H. Macy from movies like Fargo and Boogie Nights, and the TV show Shameless. If you didn’t know he was a director too, you should definitely see his movie Rudderless. It premiered at Sundance and was a moving drama about a father coping with a school shooting. Macy’s new movie is a comedy, The Layover.

Kate Upton and Alexandra Daddario play roommates who both lose their jobs and plan a spontaneous getaway to Florida. But a storm strands them in St. Louis with a hunky passenger (Matt Barr). Everything goes wrong when the ladies compete to win his attention. Macy spoke with Gonzo in Los Angeles and you can see The Layover in theaters which was released September 1.

Gonzo: Rudderless was a serious movie. Did you want to do a light comedy next?

William H. Macy: I won’t jive you. What happens is, especially when you’re just beginning on a directing career, you’ve got all these projects and you’re pushing them all. Then the phone rings and one of them is a go. Then even though you’ve been working on it for two years, you find yourself two months behind schedule. In one phone call you’re late. This one fell together very, very quickly. It had always been on my radar to do a romantic comedy or a sex comedy like this. I love broad comedy. I love slapstick. I always have. It’s really my sense of humor and I know I haven’t done a bunch of it as an actor but I thought bringing my kitchen sink dramarama sensibilities to a broad comedy might bear some good results.

G: Frank Gallagher on Shameless has some slapstick, doesn’t he?

WHM: Totally, totally, lots and lots but that’s new for me. Frank Gallagher is a departure from what I’ve done. A delicious one, thank you Lord. I’d love to do more of it. I like to laugh, man. I’m a comedy guy.

G: Comedies always sell us the idea that being spontaneous leads to a wonderful adventure. I personally like to plan things and accomplish my plans. Do you believe what movies like The Layover’s free spirit tell us?

WHM: [Laughs] Yes, in that it’s about two women who are stuck in their lives. Their lives are not going well and they both know it. They’re best friends and I think it’s a truism that for people to change, especially after you’re an adult, it takes dynamite. It takes a big event to get people to change. So the story demanded that seismic shift. Kate Upton’s character is spontaneous. That’s one of her issues in life. She doesn’t plan. Whatever she thinks, she says and whatever she wants, she gets. Alex plays her best friend who is the opposite, a planner, a worrier who abhors spontaneity. Having grown older myself, age does bring wisdom and I think there’s always hope. I think if your life isn’t working, it is never too late to fix it. That’s what I think.

G: Was there ever pressure to make the film PG-13?

WHM:  Nope. We always knew that the story we wanted to tell, we being Keith Kjarval who produced it, we knew it would be an R-rating. That’s fine with me. I don’t know the economics of the rating system. I know I don’t have any respect for the rating system because I don’t like violence. I think it’s ugly and I think it hurts us. I think Hollywood has a tendency to put out a lot of violence out there which is horseh*t, not true. They lie about violence, operatic violence, comedic violence. I’m fine with an R-rating because this is a moral story. It’s two women who love each other. Their relationship survives a big, big fight.

G: With movie violence, they found ways to make it PG-13 but show just as much shooting and fighting but sell it to kids and families.

WHM: Well, they’re wrong. It’s obscene. I have two daughters. They’re older now, 17 and 15. I never worried about sex. I didn’t want them to be watching graphic sex when they were kids, nor did that but I don’t worry about that. I didn’t have to keep them away from it. They hate violence too but I think the real pornography in films is this ugly, ugly violence and these evil characters who for no reason, it just plays to our lowest interests.

G: They do it as PG-13 to sell more tickets, so when there’s money at stake, what can be done to change things?

WHM: The only thing I can do as a filmmaker, if I’m going to have violence in my films, tell the truth. As an actor, much less, but still to a small extent I can make sure that I tell the truth about violence and just refuse to do the cartoonish immoral violence that we see in so many films. My beef is with the ratings board because as a parent, we don’t know about all these movies. I think a rating is a good thing but the ratings are just obscene. They say that young kids can watch this stuff that they should not be watching.

G: They invented PG-13 in the ‘80s because some PG movies were too intense. That was over 30 years ago and nothing’s changed.

WHM: It’s hard to be a parent and know what they can see.

G: You do have three men writing and directing a story about women. Were you sensitive to that?

WHM: Yeah, a couple of times I would say, “Boy, I hope this is true. I hope this is going to work.” I think I used the phrase, “And then the two women go at it mano a mano.” Then I thought, “Uh oh. We need femmo a femmo if that’s a word.” But I have a lot of women in my life. I talked to the actresses in this thing. We were constantly asking, “Is this true?” The big thing was Matt Barr’s character. I talked to the women in my household. I said, “Does he have to pay a price for this?” Without missing a beat, all four women in the kitchen went, “Oh, yes he does.” I love the solution we came up with. I think he does get his comeuppance. Karmically he pays a price.

G: Kate Upton does not eat hot dogs and drink Dr. Pepper in real life, does she? WHM: Oh, she’ll do anything for the movie, man. I don’t know what she has to go through but I saw the latest Sports Illustrated. She must have a very good trainer and she must eat very well because she is a stunning human being.

G: Will you direct again?

WHM: Directing’s hard. It’s the hardest thing I’ve ever done. It’s like getting hit by a truck. If you’re an actor, even though I’ve spent so much of my life on a set, I didn’t realize the pressure that the director is under. It’s very difficult. I would like to do it again and I would like to adjust my expectations in the next film so that I’m more willing and able to roll with the punches because in an indie film it all changes. You plan and plan and plan and from the first day of shooting, the plan is in jeopardy. I think I could be a lot better at being loose and letting it go. We needed a school bus. We can’t have one. Okay, we’re going to do it with a passenger van. What can we do to make this work and not scream and shout and get stomach acid. Figure out how to fix it because that’s the nature of independent film.

WHM: I’m still shooting. We finish before Thanksgiving. I get to go to Colorado. I think we’re going to do nine and maybe even more than that. It’s just growing and growing. It’s pretty crazy. The writers are just geniuses. We’ve all grown up, as the kids have grown up and matured, they’re writing to that but it’s still crazy. The family is still marginalized socially. My character is doing some crazy stuff this year. Pretty nuts.

G: Has Frank lost the love of his life?

WHM: Yeah, Monica died at the end of last season. At the end of last season, Monica had, as it turns out, stolen a whole bunch of methamphetamine. It’s enough for all the kids, if they sell it, to get a nest egg. It’s interesting what they’ll do with it. It’s about three or four episodes but as I think of it, we’re on episode seven now and some of the stuff we’ve done, it does move fast. God, those writers are good. They’re so funny and they find stories in the weirdest places.

G: Do they keep surprising you on Shameless even after eight seasons?

WHM: Yes, always. I’m always surprised. Surprise and shock and horrify. I’m Lutheran, man. I grew up on the east coast. I’m Lutheran. I read the scripts and I’m just as horrified as the audience that watches them. This season’s a good example. There’s a lot of physicality in it because he’s got this physical thing. I don’t want to give it away. I think that’s one of the things that’s so thrilling about doing a series. You regularly find yourself adrift a little bit. God, what do I do? I don’t know how to do this. That’s pretty exciting. When you’ve been in this business as long as I have, to be thrown back on your heels every once in a while with a new problem, that’s delicious. Keeps you young.

G: Are you directing any episodes this season?

WHM: I’m not. Emmy [Rossum] is. Emmy’s directing this episode. As a matter of fact, she’s in casting today. I might do one next season. We’ll see. It’s very, very difficult. I did one three years ago. First of all, Shameless is a tough directing assignment because it’s a 70 page script and it’s shot in six days. We really turn through the pages each day. And when you’re in the scenes also, it’s tough.

G: When she was fighting for equal pay, did you support her?

WHM: Yeah, absolutely. It was a no brainer. She certainly was earning it. She works harder than anybody else on our show. She’s sort of the core of the show and she’s that good. No harm, no foul. It’s the producer’s job to turn out an hour of television as inexpensively as possible, and it’s the agent’s job to get their clients as much money as possible. It all worked out well. Everybody’s making money off that show. It’s wildly successful and she absolutely deserved it.

G: Did you and your producers make sure the women on The Layover got equal pay?

WHM: Yes, it’s an independent film. Everybody agrees that no one will make anything.