The opening of a Will Smith movie used to be a surefire summer hit. It still can be, see the box office for last year’s Suicide Squad. But the movies have evolved and so has Will Smith. Heck, he gave up being The Fresh Prince decades ago. Smith’s new movie, Bright, premieres on Netflix, but will be in a few theaters if you’ve still got the itch to see Big Willie Style on the big screen.

From Training Day writer and Suicide Squad director David Ayer, Bright features Smith as a grizzled cop partnered with an orc (Joel Edgerton) in a modern day Los Angeles populated by humans, orcs and elves. Gonzo sat in Smith’s Comic-Con press conference for Bright this summer, just after he’d returned from Cannes where Netflix’s submissions faced controversy at the prestigious festival. Now Bright is on Netflix and in theaters December 22. 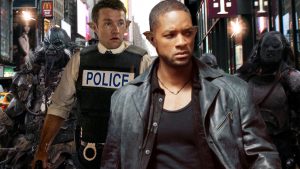 G: At Cannes, you said something really beautiful about how this generation watches movies both on Netflix and in theaters. How do you see watching movies on Netflix and theaters evolving side by side?

WS: I have a 16-year-old, a 19-year-old and a 25-year-old at home. So their viewing habits are almost anthropological. There’s a great study to be able to see how they still go to the movies on Friday and Saturday night, and they watch Netflix all week. So it’s two completely different experiences, but it’s definitely a different experience. I don’t think anyone’s trying to say that it’s an identical experience. I was talking earlier, I was on The Fresh Prince of Bel-Air so people would see me on the street and it was like, “Will! Will! Will!” And then Independence Day came out. That Monday after Independence Day came out was the first time that anybody referred to me as Mr. Smith. So there’s definitely something about that big screen that penetrates people in a very different kind of way. It’s a different medium. It’s very different. I’m sure it was the same kind of vibe when the transition happened from theater acting where you went to go see a play and then someone decided they were going to film it and put it together and move it to a movie theater. I’m sure the purists had that same kind of feeling, but it’s different. It’s not the same thing. It’s something different. It’s new, almost a new art form.

Q: Had you made Bright at a movie studio, what would have been compromised?

WS: I think what the major difference is is the Netflix business model is different in a way. Because it’s subscription-based, what gets created is that their risk profile is different. Netflix can make a hard rated R film for $170 million. Studios can’t do that if the executive wants to be at work on Monday. The risk profile, if they’re going to spend $170 million – I’m not saying that’s what this one was, that number was just in my head. I think I’m suggesting the next will be – but when you make a movie that expensive, you have to broaden the audience which means that you have to be PG-13. It is a huge decision where you make a film of that magnitude based on the risk profile. So at Netflix, based on the subscription, they can make anything for any number that they feel like their base is going to want to see. As an artist, it is free in that way. It’s just a lot of little ways that you get to create in that get slightly just confined when everybody’s jobs are on the line for the success. And because they work off of specific data, they know ahead of time with the director of Suicide Squad and with me at this point in my career, they go through and they have numbers on everybody. They add your numbers up and they say, “Yes, it works.” They go and they know who’s going to buy the movie even before you shoot it. So it’s a completely different basis of how they work that the trickle down is that between action and cut, we get to do whatever we want. 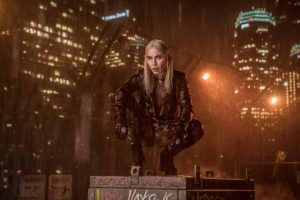 Q: Some of your old school fans thought with your mustache in Bright, you now look like you did on the episode of Fresh Prince where you pretended to be Ashley’s father. What do you think about fans making connections between your current movies and The Fresh Prince to this day?

WS: It is such a new world. I released my first record in ’86 so I’m over 30 years in the business. On my first album, there were no CDs. It wasn’t until my second album that they came out with these hot new discs called CDs. Seeing that transition, essentially the fans being more and more evolved in the creative process. In terms of movie stardom, it’s a huge difference. You almost can’t make new movie stars anymore because there’s a certain amount of privacy and there was a certain amount of distance that you had from the audience, and only on July 4th did you have access. That amount of access created this bigger than life kind of thing. The shift into this new world, it’s almost like a friendship with the fans. The relationship is less like the time of Madonna and Michael Jackson where you could make Tom Cruise, these gigantic figures because you can’t create that anymore. The shift is to we’re best friends. That’s like the comments with those pictures. I love trying to make that shift and make that transition into the new demands of the fans in this business.

Q: Christopher Nolan said Netflix’s strategy is mindless and he refuses to work with them. What is your reaction?

WS: I think Mr. Nolan is a wonderful director and I will not say anything that will keep me from being in his next movie. I don’t like your attitude about Mr. Nolan. [Joking] I don’t want to ignore your question. I think that there are certain things that you want to see on a big screen. I remember the Christmas that Avatar came out and our entire family rushed out on Christmas day to go with the glasses and all of that. So there’s an experience and specifically the type of films that Chris makes, you want to see them in that space. It’s like the venue is a part of the experience.

Q: Does Bright portray the kind of police violence of the real world? 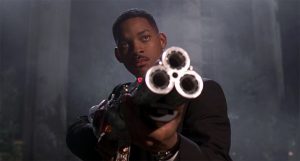 WS: Yeah, for sure. David is, let’s say, he doesn’t find the necessity to be delicate with those issues. This is a film that is about enjoyment and entertainment. Those undercurrents and undertones of the film are specifically for people to be able to think about it, not to make a judgment about it. It’s like we’re displaying the look and the feel. There’s a great scene where we’re sitting and looking at the police car coming. Something has happened with an orc and the police are trying to subdue the orc. My character is sitting specifically with Joel’s character while the police are subduing that orc and I ask him, “I need to know. Are you a cop first or an orc first?” The backdrop of the scene is the cops taking down this orc, so it’s rugged and it’s powerful. It’s really bizarre for me to be on the other side of that. We did ride-alongs with LAPD and with the sheriffs. As an African-American, it was really a different perspective for me to be in the back of cars riding around with police officers in Los Angeles in predominantly black and Hispanic neighborhoods and seeing the complexities from the other side. It was spectacular for me, an African-American, playing a police officer that was racist against the first orc on the force. It’s like the flip of those social concepts. As a black dude, you just don’t get a lot of movies where you’re the racist. It was great, man. “I don’t want no orc in my car.” You just never get to say that.