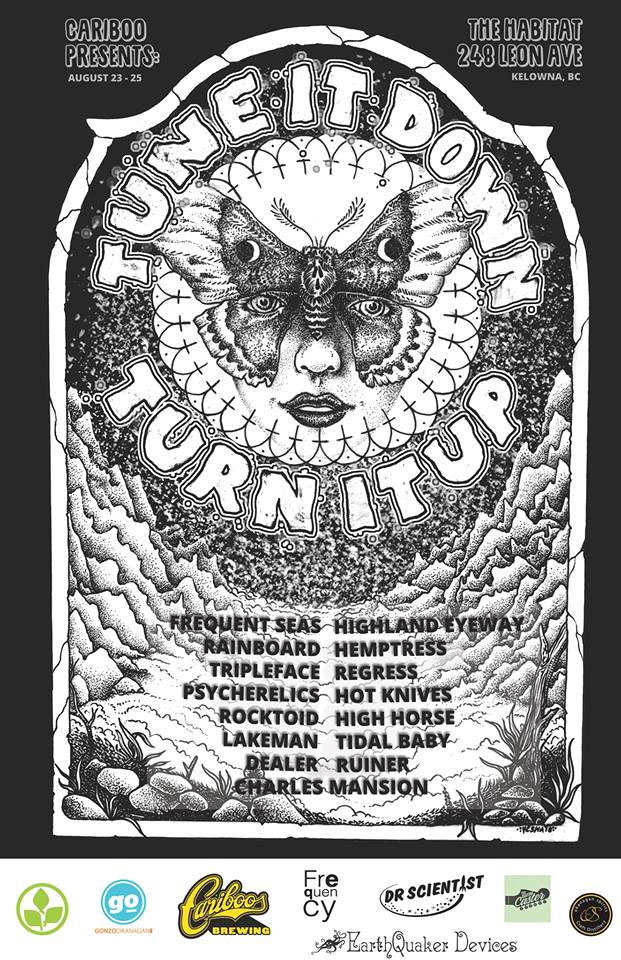 Tune It Down, Turn It Up Teaser

Here Are The Bands Performing At The Tune It Down, Turn It Up Showcase Next Weekend.

The first ever Stoner & Fuzz Rock showcase Turn It Down, Tune It Up is taking place on August 24th and 25th in Kelowna at Habitat. We here at Gonzo Okanagan are very ecited for this showcase, as it gathers some of the best bands from the interior of BC to showcase their stuff. We’ve covered the genre and the showcase a little bit, as well as Dave Catching’s involvement with the festival.

Now we’d like to share with you the opportunity to check out some of these bands. The event kicks off on Thursday, August 23rd, at the Innovation Centre with a talk by Dave Catching, and the showcase runs Friday and Saturday night at Habitat.

Ticket prices are available at a steal for $15 a pop! Grab your tickets right here!

Highland Eyeway is a quartet hailing partially from Vancouver and partially from Kelowna. Coined as Psychedelic Rock, their music stands out with it’s spacious and fuzzy guitars and droning vocals. At once heavy and delicate, their sound is intentionally crafted and delivered extremely well. They just finished a 19 date tour in the Pacific North West to promote the release of their new EP Oneirology, released in June.

Self-described as a Stoner Rock/Blues band, Psycherelics are one of the local acts performing at Tune It Down, Turn It Up. The trio plays a riff-heavy blues-inspired rock, packed to the teeth with all noise and distortion a proper fuzz head could want. If Jimi Hendrix took his Fender and played grunge music, it would sound like Psycherelics. The lead songwriter is Talon Wade, who with Fraser Burke and Jordan Pearce have been kicking around the Kelowna music scene for many years.

I had the opportunity to catch Lakeman at Arts Wells festival last year, and was totally entranced by this group. This crew creates long compositions that seem to change with every performance. Drawing obvious inspiration from classical compositions as well as middle-eastern and heavy rock, Noise and Art are the two genres that would come to mind when describing Lakeman. As the compositions change, the players also rotate instruments as well – these guys are genius, and will assuredly be putting on one heck of a show on Friday night at Tune It Down, Turn It Up.

Kamloops’ Hemptress is a sludgy, sleazy, Stoner Rock quartet with all the vigor of a young Black Sabbath. The lo-fi hard rock has a definite purple-kush-flavoured note to it, and brings the listener to a muddy swamp scape where their jeans rip, their hair grows out and their head can’t stop bobbing. Low guitar tones and staggering drums cushion hollered vocals, combining for an exquisitely dark listening experience.

Now here’s a full-on Doom band. Regress, hailing from Kamloops, is a heavy, swampy Doom trio. Heavy, fuzzed out tunes paint pictures of a scorched underworld, as you would expect with the genre moniker ‘Doom’. Don’t be turned away by the downtempo nature of this genre – it’s heavier than most things you’ll ever hear, and definitely worth having a listen to in a dark, smoky room.

Locals High Horse perform a highly progressive, exciting blend of Stoner and Math rock. This is a guitar-forward trio, featuring fast riffs that change time and that find resolution multiple times in a song. The drums carry the changing guitar rhythms and deliver High Horse’s sound in a grungy pizza box, right to your ears.

At first listen Tidal Baby sounds like a bit of an anomaly for selection in the lineup, but a full listen through their desert inspired EP In Droughts marks them as a curation shoe-in. The surfy tone of the guitar, the feedback, and the instrumental nature is perfect for a Stoner Rock festival. Take this EP and listen through it while driving the Connector in all this smoke, and you’ll find inspiration.

The Slocan Valley’s Ruiner is an upbeat Stoner Rock band that features uptempo tunes with rhythmic changes and vocals reminiscent of the 70s British Punk scene. Their music preys on the unexpected, taking routes most contemporary bands won’t take with progressions, stops and arpeggio fills.

Kelowna’s very own Charles Mansion are a psychedelic trip born from a number of local rockers, and they are part of the driving force behind Tune It Down, Turn It Up. Once described by Creep Purple Promotions as “Psych Rock with acid bath clean vocals,” this crew is groovy and riddled with soundscape valleys. Long instrumentals, and hard-edge vocals make up this band’s firmly established sound.

Hot Knives originally started as a duo – Derek Otto (formerly of The Fangles) and Pete Dimov (formerly of The Wild!) put together this edgy, riffy stoner rock project to great reception from the local scene. Now, with the addition of Rutland’s favourite celebrity Charlie Handsome on bass, and a bunch of new tunes ready to be unveiled at Tune It Down, Turn It Up, this trio has become fiercer than ever.

Self-described as “Extremely abusive, loud, electric rock”, Nelson’s Dealer is a hard-hitting band and are excited to be performing the Tune It Down, Turn It Up showcase.

SweetBeast is a relatively new quartet on the scene. These boys are Psychedelic/Fuzz Rock from right here in town, and are very excited to be on the lineup for Tune It Down, Turn It Up in 2018.

This writer can’t find much about Rocktoid, but we’re excited to check them out at this year’s festival. They recently landed a slot at Massif down in Nelson this year, and will be featured on Friday night with Rainboard, Lakeman and more.