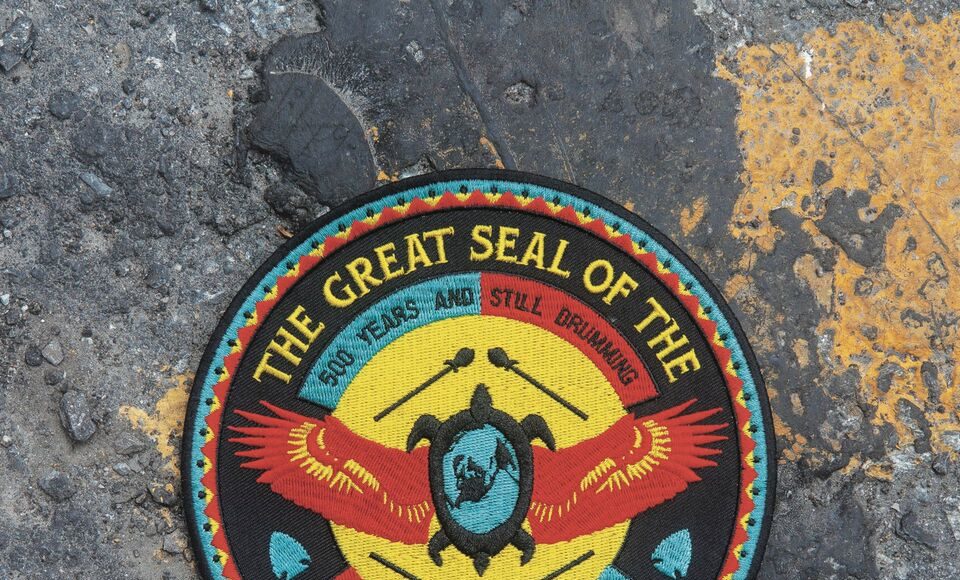 TRACK FEATURES YASIIN BEY, NARCY& BLACK BEARNEW ALBUM WE ARE THE HALLUCI NATIONOUT SEPTEMBER 16″Over the past two years their sound has grown more than ever. They’ve returned empowered, with new music and an invitation to anyone dissatisfied with the current state of our post-colonial world to join them in building the Halluci Nation.” – Mic.comToronto, ON – July 21, 2016 – Today, A Tribe Called Red share their scalding new single, R.E.D., via Apple Music & iTunes.  The track features Yasiin Bey (formerly known as Mos Def), Narcy, and Black Bear – a bleak beat stacked with synths, shouts and a flurry of percussion.  R.E.D. was premiered last night (Wednesday July 20th) on Apple Music’s Beats 1 and is available for purchase and streaming on all other digital service providers on Friday, July 22nd.  R.E.D. can be found on the band’s forthcoming album, We Are The Halluci Nation (out September 16th via Pirates Blend).Of the track, ATCR comments, “The Halluci Nation has no barriers, it sees no borders and their operatives are everywhere. Yasiin Bey is an allie of the Halluci Nation who has been unjustly detained in Johannesburg, South Africa by the Alie-Nation. Narcy is one of the Guardians of the Halluci Nation and he has been given the job of helping to free Yasiin and lead him to the Halluci Nation territory. We are of earth and sky. The Halluci Nation.”“I think it is the first time in history where you have an African, an Iraqi and the Indigenous of Canada all on one song,” adds Narcy. “It’s an important breaking in culture; we are coming together to counter the narratives built around the history of our communities and showing the power of our people combined. It feels like the beginning of something new and old; the rebirth after many injustices.”Along with Yasiin Bey and Narcy, We Are The Halluci Nation features guests Saul Williams, Polaris Prize-winning throat singer Tanya Tagaq, Shad and many others. Indigenous Canadian artists like Black Bear, Northern Voice and the Chippewa Travellers recorded with A Tribe Called Red and are prominently featured. The album title comes from a series of works that poet and activist, John Trudell, wrote for the band before his passing last year. Some of his recitations also appear on the album.Last week, the group released the album title-track – check out the lyric video here, and get a behind-the-scenes look at the group’s album making process with The Manawan Session mini-documentary (produced with the financial assistance of MuchFACT a division of Bell Media Inc.). Pre-order the record here.UPCOMING TOUR DATES:07/23 | Way Home Festival | Oro-Medonte, ON (Tickets)07/31 | The Banff Centre – Shaw Amphitheatre | Banff, AB (Tickets)08/15 | Festival Acadie Rock – Riverfront Park | Moncton, NB (FREE)08/18 | Boyce Farmers Market | Fredericton, NB08/19 | The Marquee Ballroom | Halifax, NS08/20 | 2016 Nova Scotia Mi’kmaw Summer Games | Membertou, NS (FREE)08/31 | Pacific National Exhibition | Vancouver, BC (FREE with gate admission)09/02 | Chevrolet Courts – New York State Fairgrounds | Brooklyn, NY09/21 | Baby’s All Right | Syracuse, NY09/23 | The Wayfarer | Costa Mesa, CA09/24 | The Hideout | San Diego, CA09/26 | The Troubadour | Los Angeles, CA10/04 | Urban Lounge | Salt Lake City, UT10/06 | Larimer Lounge | Denver, CO10/07 | Larimer Lounge | Denver, CO10/10 | Ft. Lewis College | Durango, CO11/15 | Wonder Ballroom | Portland, OR11/16 | The Crocodile | Seattle, WA11/17 | Wild Buffalo | Bellingham, WA12/06 | Skyway Theater (Studio B) | Minneapolis, MN12/07 | Lincoln Hall | Chicago, IL