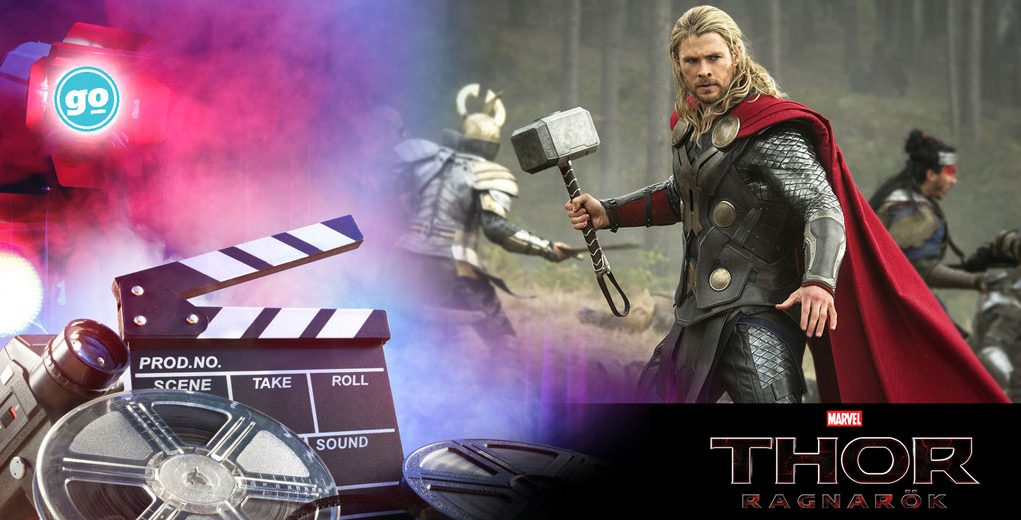 Thor (Chris Hemsworth) is back. Not only does he face his deadliest villain yet in Hela (Cate Blanchett), the Goddes of Death, but he does it with a lighter touch. Thor: Ragnarok is the most comedic of the Thor movies, more along the lines of Guardians of the Galaxy.

Loki (Tom Hiddleston) is still Thor’s troublemaking brother. New friends and foes include the Grandmaster (Jeff Goldblum) and his loyal soldier Valkyrie (Tessa Thompson). Even the Incredible Hulk (Mark Ruffalo) is along for the ride. Gonzo attended the press conference with the cast of Thor: Ragnarok in Los Angeles. The movie opens this weekend in theaters.

Q: What makes this Thor different from the others?

CH: [Director] Taika Waititi basically. We all had a vision and idea or want to do something vastly different than what we’ve done before and take it to a different place. That meant doing away with what we knew and reinventing it. It all came from his crazy wonderful brain, his inspiration in pushing us every day on set and constantly encouraging us to improvise and explore and take risks. It was one of the most enjoyable experiences I’ve ever had on a set, a film that I feel most proud of because of this whole team, the collaboration and fun we had.

Q: Mark, are you interested in doing a Hulk solo movie? If so what aspect of the character would you be most interested in exploring?

MR: I would love to do a Hulk movie and I think we all would love to do one. About a year ago, before I even had this part, we were talking about doing this well over a year ago. Kevin asked me to come over and have a script meeting. Basically he sat me down and he said, “What would you like to do if you had a standalone Hulk movie?” I said, “I’d like to do this, this and this, and this and this, and then this. And then this and this and this, and then it would end like this.” He’s like, “I love that. Let’s do that over the next three movies staring with Thor 3, carry it on through Avengers 3 and Avengers 4.” So that’s my standalone Hulk movie. Taika’s going to take all three of those movies and cut it into one movie. And it’ll be on the DVD and me and Taika can own that.

Q: Tessa, did you feel any pressure playing a character that was white in the comics and bringing her to life?

TT: No, I didn’t feel any pressure with that specifically. The things that I thought about the particulars of Valkyrie had more to do with mass and size. For example, I thought I’m short. I’m not buff enough. She’s arguably as strong as Thor. How do I stand next to a person like Chris Hemsworth and feel like that’s true? So I didn’t think so much. Satisfying Norse mythology, it’s mystifying, fantastical and glorious and also very confusing and doesn’t make a lot of sense. I remember someone online saying, “Tessa Thompson playing Valkyrie is white genocide” which is just as mystifying as Norse mythology. The thing I’m tasked to do with any character that has its own iconography is to capture the spirit of the character. I think the spirit of all of us, at the risk of sounding cheesy, has very little to do with what color we are. So I just didn’t really invest in that. Q: Jeff, you’ve been in so many iconic films, what was it like coming into the Marvel universe?

JG: Fantastic. Fantastic. I like the character of course, and the opportunities in the character. Joining a group like this, a cast like this, it was a dream come true. Working with Taika, it was my first connection point to the movie. We had a meeting and hit it off. He said what we were going to do and improvise and have fun. Then Kevin Feige and Louis D’Esposito and Victoria Alonso and Brad Winderbaum, the whole upper tier of creative leaders do something unique. They know how to make these epic productions and popular movies but they want to make good movies. They somehow uniquely know how to do them. That feels to me like an actorly workshopy, charactery, improvisatory, delightful experience and make a movie that I think skins the cat like this, I’m grateful, overwhelmingly grateful.

Q: Was there healthy competition on set?

CH: That’s why we don’t sit next to each other.

CB: Mark was always in the middle.

Q: Cate, you are one bad ass in this movie. How was it fighting with Chris?

CB: I didn’t do enough of it. I kept wanting to do more. But no, it was hugely enjoyable for me. Apart from working with these guys, obviously, the chance to finally, in my deep middle age, to get fit and wear that much lycra was really exciting for me. I worked with Chris’s trainer, Luke Zocchi, for 20 minutes a day which doesn’t sound like much but my god, it’s intense. Zoe Bell, who is an extraordinary actress in her own right and director in her own right, but I was blessed every day with the fact that she was my stunt double. When I started, I had to manifest those weapons. I had to throw them and I could see Taika’s disappointment as I threw it. I said, “Ha” and I had to stop making the noises because I’d go “Ha.” So I had to close my mouth. Eventually, Zoe suggested that I put some sugar packets in my hands so at least I could throw something and be real. So Zoe helped me with little things like that. She was a great action director so I moved from the humiliating to the exhilarating in a matter of five minutes. Q: Have you ever played Goneril and would Hela qualify as that kind of character?

CB: Yes, that’s quite a good comparison. I didn’t think about Shakespeare very much on this one but it was great to, just on a prosaic level, the language had shifted enormously in this. It was just, texturally, a huge departure and as Jeff was referring to, how much improvisation there was. I’m really upset that the line “Dumbos” didn’t end up [in the film.] Taika would just keep throwing lines and one day when we were on the set my line was, “I’m the Goddess of Death. What are you the God of again?” Chris would say, “I’m the God of…” Taika said, “Dumbos.” That should’ve made the cut. So the language was quite different but personally, I went back to two things primarily. I went back to the extraordinary images that are there in the original comics. And then I went to the fan base because there’s all these Hela fan girls who are doing these extraordinary makeups online. When we were thinking about what she’d look like visually, I went to that. So I started with the visual rather than the textural I think.

Q: Hulk speaks more than ever before in this movie. What was it like hearing his dialogue? It’s almost childlike.

CH: I loved it. This is my favorite version of the Hulk, because we actually got to act together. We’d only really fought one another on screen in the previous films. This time around, we got to just improvise our way through it, and invent this chemistry that we hadn’t explored before and build this new version of the Hulk which was a little bit more articulate and vocal than he had been prior. There’s just so much more room for humor and fun that the character embodies that I think is fantastic. I loved it.

Q: Tom, could Loki ever change?

TH: I did ask Taika if I could get a haircut as well, but his answer was a quick no. It’s interesting. In a way, in this film, it is about, I think I’m not spoiling anything, but the development in the relationship between Thor and Loki as brothers is Thor has evolved and grown and matured. Loki in a way is stuck in his struggles of the past. That’s the challenge for Loki in this. He’s got to confront the fact that time is moving on and people change. So I don’t know. We’ll see. We’ll see. There’s room to grow and I’m still here. We’ll see where he goes next. I’m not going to spoil anything.

Q: Did you miss having your hammer?

CB: Yeah, what did you do with your hands?

CH: It was sort of good. It just helped kind of shed anything too familiar. I feel like holding the hammer or even the wig and the previous costume certainly did put me in a place and set me on a path of what I already knew. I wanted it to be unfamiliar, so everything from the hammer to the costume, the hair, made me, allowed me to move differently and forced me to move differently. So that was a great thing. I don’t really miss it, no. I’ve got one at home. It’s in the toilet actually.