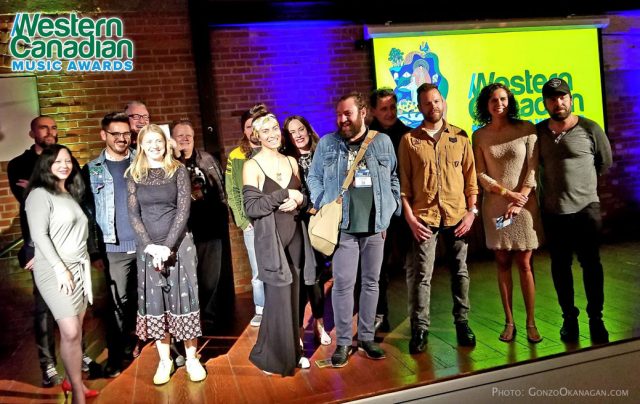 INDUSTRY AWARDS TO BE GIVEN OUT ON

Kelowna, BC – Thursday, October 11, 2018 – Celebrating the best artistic talent in western Canada, the Western Canadian Music Alliance is thrilled to announce the winners of the Western Canadian Music Artistic Awards. The winners were revealed earlier today at the WCMAwards Reception held at Laurel Packing House in Kelowna, BC, at part of the BreakOut West music festival and conference. See below for the full list of Artistic Award recipients.

The Industry Awards will be announced on Saturday, October 13th at the Industry Awards Brunch, hosted at the Delta Grand Okanagan Resort. Honourees include Terry Jacks who will receive the 2018 Heritage Award, and Allan Reid who is to be presented with the 2018 Kevin Walters Industry Builder Award. The Canadian Songwriter’s Hall Of Fame Induction will also take place, honouring Spirit of the West’s iconic song, Home for a Rest (written by John Mann and Geoffrey Kelly), and Kelowna-born rock band, The Grapes Of Wrath, will be inducted into the Western Canadian Music Hall Of Fame.

BOW festival showcases get underway tonight, starting with the KickOff Concert at the Kelowna Community Theatre, headlined by Kelowna rockers, The Wild!, and featuring showcase acts, Like A Motorcycle and Little Destroyer.

Festival wristbands are still available at tickets.breakoutwest.ca. Festival-goers can redeem their online purchases of wristbands at the Tourism Kelowna Visitors Centre or at festival venues, one hour before the first act hits the stage.

Information about the festival and conference can be found at breakoutwest.ca and on the BreakOut West 2018 mobile event app, powered by Greencopper. Available at Apple and Google Play, the app is the place to get the most up to date information and connect with other festival-goers throughout the weekend. Search BreakOut West 2018 to download the free app to get the latest updates and sneak peeks.

Blues Artist of the Year
The Harpoonist & The Axe Murderer – BC

Classical Composition of the Year
Jocelyn Morlock – BC

Electronic/Dance Artist of the Year
The Funk Hunters – BC

Pop Artist of the Year
Dear Rouge – BC

Producer of the Year (Sponsored by Nimbus School of Recording Arts)
Ryan Worsley, Echoplant Sound – BC

Songwriter(s) of the Year (Sponsored by The Society of Composers, Authors and Music Publishers of Canada (SOCAN))
Dear Rouge, Dear Rouge, Chains – BC

Spiritual Artist of the Year
Stephanie Ratcliff – BC

Urban Artist of the Year
HAVYN – BC

Visual Media Composer of the Year
Keri Latimer, This is Not Paris – MB