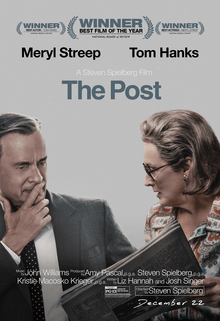 One of the advantages of being in L.A. over the holidays is being among the first to see the last movies of the year. In some cases, the stars and filmmakers even attend the early screenings themselves! That’s how Gonzo found ourselves listening to Meryl Streep, Tom Hanks and Steven Spielberg themselves talking about their latest film, The Post.

The Post in The Post is The Washington Post, now a famous newspaper worldwide. In the ‘70s it was just a local rag getting scooped by The New York Times all the time. That is, until Richard Nixon served the Times with an injunction to cease publishing information from The Pentagon Papers. The Post shows how publisher Kay Graham (Streep) decided to publish the breaking news that editor Ben Bradlee (Hanks) and his staff reported, thus beginning the downfall of the Nixon White House. The Post opens February 12.

Q: You got the script in February and shot in June. What was the urgency?

SS: What was the urgency? Well, I was really depressed about the way things were happening in the world and the country. Liz Hannah, 31 years old, writes a spec script, gets it to Amy Pascal who sends it to me and suddenly my entire outlook on the future brightened, overnight. It was there on paper and I just felt that there was an urgency to reflect 1971 in 2017 because it was very terrifyingly similar.

Q: Tom, is it true you had the actors playing the reporters and editors to lunch?

TH: Yeah, everybody asked me what it’s like to work with Steven. So I said, “Look, come over. We’ll have some pie and I’ll explain the way the guy works.” Everybody came over and literally everybody who was in the newsroom.

TH: Not you, no, because you were the boss. These were the people who were in the newsroom. We invited one lady, Carrie Coon. She got to come. The discussion was, everybody has this sense that when Steven arrives on the set, no one’s allowed to look at him. He turns your face and  says, “You will say the line and turn your face this way.” It’s not like that. The way I explained it, I said, “Look, there’s no rehearsal. Our job is to show up on time, to know our lines, the dialogue as it is and to be flexible to go in any direction that we might have, because Steven loves actors acting. He wants you to come in with ideas.” They’ll say, “Really?” I said, “Yes, and he will also throw at you stuff that you can’t even begin to imagine right now. That will happen most days and then other days you will come and all of your work will be done for you. There is some shot, some concept that means all we have to do is inhabit those moments and it will be in the film.” The best example of it I think is we had a scene that actors love because it had five or six of us in it. We’re all sitting around talking about, “Oh, you’re burying the lead there. You put that in the second graph for crying out loud. What are we, we look like a novel that you’re gonna be able to type this? Why don’t you get your book and get out and do…” We had all this fabulous Liz Hannah and Josh Singer Front Page kind of jargon we were throwing around. We were in heaven and we kept waiting for Steven to come in with a camera and he never really did because he was shooting a guy with a shoebox full of papers in it. Suddenly, a scene that we thought was about us arguing about how to make the paper became a story about a guy with a shoebox with papers. That’s the type of thing. All we had to do was inhabit a moment. The real important [thing] wasn’t about us. It was about the shoebox full of papers. That was raised up and the fellow who played the guy with the shoebox, he didn’t know he was going to do that that day. He was just a guy at a desk, kind of like a glorified dress extra. Did he even have a line in the screenplay?

SS: He had a line in the screenplay I think but I gave him most of the lines on the set that day, that Josh was giving me to give to him. And, he was also a New York City detective.

Q: How did you assemble this ensemble?

SS: I can’t name names but some big actors. But everybody that I wanted in the movie, they were available and they all said yes. Every first choice is in the film. There’s nobody that I wish I could’ve gotten [someone else].  All the first choices said yes. We cast it very quickly. I have to give my thanks and gratitude to an amazing casting director who I could not have made this movie without. Her name is Ellen Lewis. Ellen reached deep into not only the people I was hoping to work with. I’ve known Bradley Whitford for 20 years. I’ve always wanted to work with him. I had the shot to do it this time. Bruce Greenwood I’ve known for a long time, never worked with him, got a shot to work with him. Then Ellen went to Broadway theater, off Broadway theater and she pulled some great, great people off the boards who I never knew about and brought them all in. It was one of my favorite cast pictures I think I’ve worked on.

Q: How did you decide to play the scene on the phone where Katharine makes her decision?

MS: Well, that was from her book. I did really rely on her book as a bible of her interior life because she was so eloquent about the emotions that led up to it. She did say in her book that there was just a moment where she just went blank and said what she said. “Let’s do it. Let’s do it. Let’s publish.” But almost in a void. So many things led up to it but in the moment just before… There’s a great documentary I saw once about the lsat eight seconds before Olympic athletes go. Did anybody see this? That’s all it was. The whole documentary was just the eight seconds before people would take a dive or get up off their mark. It reminded me of that moment. It’s just everything concentrated into yes. I remembered it when I was going in to shoot it. Then they ruined it.

TH: No, we did not. What happened was a bunch of guys who were essentially treating it like a day off because we could wear our shorts and flip-flops that day, sitting in that little blue tent. We had not idea that we were providing an audio track for what was going to be one of the most important moments in a motion picture that I’ve seen all year. We felt as though we just barely glanced onto greatness there by hanging out in our little fart filled blue tent.

Q: How did you decide how to shoot the Nixon scenes?

SS: Well, I had been aware of the Nixon tapes based on the release during the freedom of information act. Josh and I talked about this. I just said, “Why don’t we let Nixon play himself in the movie? He’s available. And accessible, very accessible.”

MS: He was your first.

SS: He was my first choice. So the idea was, my first idea was and Josh and I discussed, and Liz discussed this with us too about letting Nixon just be a voiceover, just hearing his voice. But I really felt that we needed to see him. So I asked Rick, “Can I see him through a window like there’s a camera, with a zoom lens by the way because I zoomed in on the shot, slowly zooming in and he’s in the White House. He’s in his Oval Office and he’s talking on the phone.” So Rick built the entire facade of the Oval Office on the backlot where we were shooting at Steiner studios. We shot it at dusk because Janusz wanted some ambiance in the air, so it wasn’t just shot with arc lights but it was actually some sky ambiance on the white facade of the Oval Office. We just did it shooting that way and we got a wonderful actor, about 86/87 years old, who never played Nixon before but had a striking resemblance to Nixon and was able to listen to the tapes and saw a lot of file footage on Nixon, and was able to find the hunched shoulders and the gestures. “Don’t tell my wife because she’ll let The Washington Post in.” All that stuff, he studied and then we shot it in about an hour. It was fast.

SS: Waaah but here’s the other thing. I’m not going to sit here and defend Richard Nixon, but this opportunity to read Ben Bradlee’s book, to read Katharine Graham’s book, I got a chance to read the Richard Nixon book which came out recently. For all of his paranoia and all the things that were really self-destructive where he didn’t have enough feet to shoot himself in, but he did it all the time. Pretty brilliant guy when you really sit back.

SS: When you really read his contributions. You have to look at both sides of this.

TH: Invented the Republican cloth coat. Nothin’, eh? How old are you people? Remember the Checkers speech for God’s sake?

Q: Who is your intended audience for The Post?

SS: I think our intended audience are the people who have spent basically the last 13-14 months thirsting and starving for the truth.  And they’re out there. They’re out there and they need some good news. If they have to look back to 1971 to find it and compare it with the great pendulum swings. The thing about a pendulum is it always swings back. It always swings back.