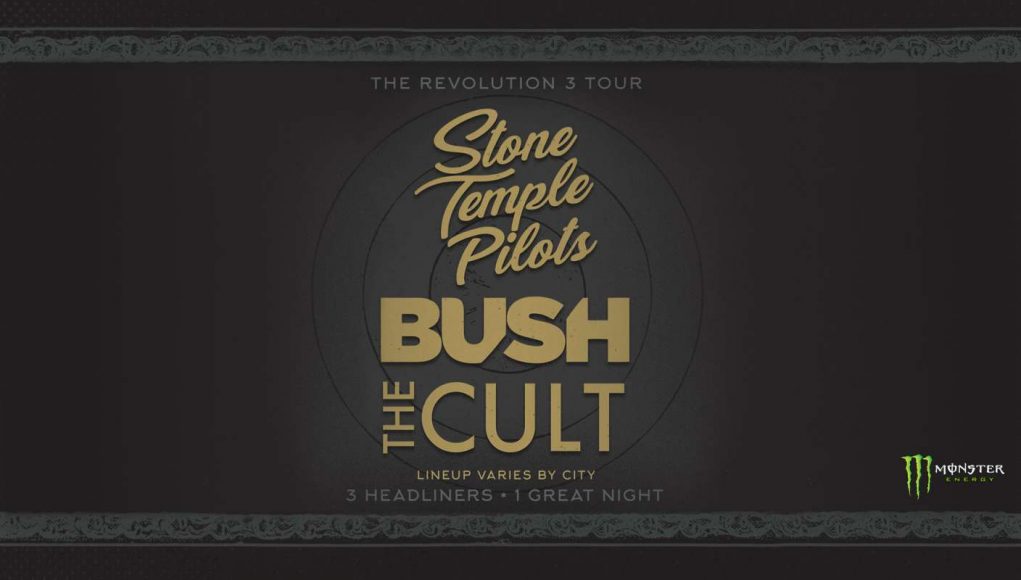 Today three of the most legendary bands in rock –The Cult, Stone Temple Pilots, Bush, – announced they are teaming up to create a tri-headlining event like no other: the Revolution 3 tour with special guests, Bones. The outing produced by Live Nation marks the first time that these forces of rock music will hit the road together and will hit Abbotsford Centre on August 28. Tickets for the Abbotsford stop on the Revolution 3 tour go on sale to the general public beginning Friday, May 25 6 at 10am at LiveNation.com.

On Revolution 3, these world renowned, multi-platinum selling bands will create an unforgettable night of music, with each group taking the stage in a different order on every stop of the revolving headline tour. Fans of the award-winning bands can expect a full set of music by each group and a night of hit songs spanning generations from the three acts sharing one stage for the epic run of shows.

“Over the years I have come to call the DeLeo brothers close friends. I appreciate their excellent musicianship and crazy sense of humor,” Billy Duffy of The Cult said. “I am looking forward to this amazing tour with STP and Bush knowing we will all be sharing the stage and enjoying a lot of laughs!”

“It is with great honor and pleasure to know we will be spending our summer vacation on the road with the Gents from The Cult and Bush,” said Dean DeLeo of Stone Temple Pilots. “Two great bands and more so, great friends. Also, to be there with you is even better. With love. See y’all soon.”

“It’s going to be a great summer with STP and The Cult, two bands built on great rock songs,” says Bush vocalist Gavin Rossdale. “See you all out there.”

“This was a chance to put three great headliners together on one tour,” Rick Franks, Live Nation Regional President of North American Concerts. “Something that would give the fans an unforgettable night out.”

About The Cult
THE CULT has reveled in a controversial and storied career. Emerging from the darkly romantic UK post-punk scene with the album DREAMTIME followed by the anthematic idealism of LOVE, the Rick Rubin produced NYC street hustle of ELECTRIC to the textural amplifier worship of SONIC TEMPLE & CEREMONY deconstructing full circle for THE CULT. After a brief hiatus, the band returned performing at the Tibetan Freedom concert then embedded themselves in the studio to record and release BEYOND GOOD & EVIL in 2001 just prior to 9/11.

BORN INTO THIS (named after a Charles Bukowski poem) their 6th release was heralded by MOJO Magazine as “a wholehearted, utopian, and irrefutably exciting record.” CHOICE OF WEAPON The Cult’s third full-length album of the new millennium made its IMPACT against the ever-growing TIDE of disposable new media launching a triumphant global tour culminating in an intense uplifting performance at Coachella 2014 acknowledged as “THE MESSIANIC MOMENT OF COACHELLA” by Rolling Stone magazine … In 2016 the band released its 10th studio album HIDDEN CITY an elegantly brutal masterpiece inspired by a visceral exploration of self and soul launching THE CULT into another triumphant world tour burning up stages with Public Enemy, Primal Scream, Foo Fighters, Guns and Roses and many others.

About Stone Temple Pilots
With over 70 million albums sold, Stone Temple Pilots roared on to the scene in 1992 with their raucous debut, Core. A breakout success, the album peaked #3 on the Billboard 200 chart, and dominated radio waves with hits like “Sex Type Thing,” “Wicked Garden,” and the Grammy-Award winning smash single, “Plush.” STP  quickly distinguished themselves as a band beholden to no trend. Boasting the inimitable riffs of guitarist Dean DeLeo, the propulsive rhythm section of bassist Robert DeLeo and drummer Eric Kretz, and the charismatic baritone of frontman Scott Weiland, STP ruled airways, video playlists and charts alike over their legendary career. The band has just released their seventh studio album, Stone Temple Pilots (2018), their first with new lead singer, Jeff Gutt. The debut single “Meadow” from the self-titled album, channels the gritty guitars and swaggering rhythms that STP is known for, and reached top 5 at rock radio. All Music Guide states, “They haven’t lost their knack for hook-heavy hard rock that wedges its way into the subconscious.”

About Bush
BUSH is touring in support of latest release of BLACK AND WHITE RAINBOWS and single “This Is War.” People magazine hailed the new album, which was written, recorded and produced by vocalist Gavin Rossdale, as “a triumphant return.” AllMusic said it showed a “reinvigorated spirit” and ABC News gave the album four stars, calling it a “remarkably cohesive set.”  Over the course of the past year, BUSH (rounded out by drummer Robin Goodridge, guitarist Chris Traynor and bassist Corey Britz) has played to packed-house crowds across North America, performed on “Jimmy Kimmel Live!” and released the music from BLACK AND WHITE RAINBOWS in stages, including teaming with  The Huffington Post for the premiere of “The Beat Of Your Heart” and Billboard for the debut of “Dystopia.” BUSH has sold over 20 million records in the U.S. and Canada alone. They’ve also compiled an amazing string of 18 consecutive Top 40 hit singles on the Modern Rock and Mainstream Rock charts. Eleven of those hit the Top 5, six of which shot to No. 1: “Comedown,” “Glycerine,” “Machinehead,” “Swallowed,” “The Chemicals Between Us” and “The Sound of Winter.”