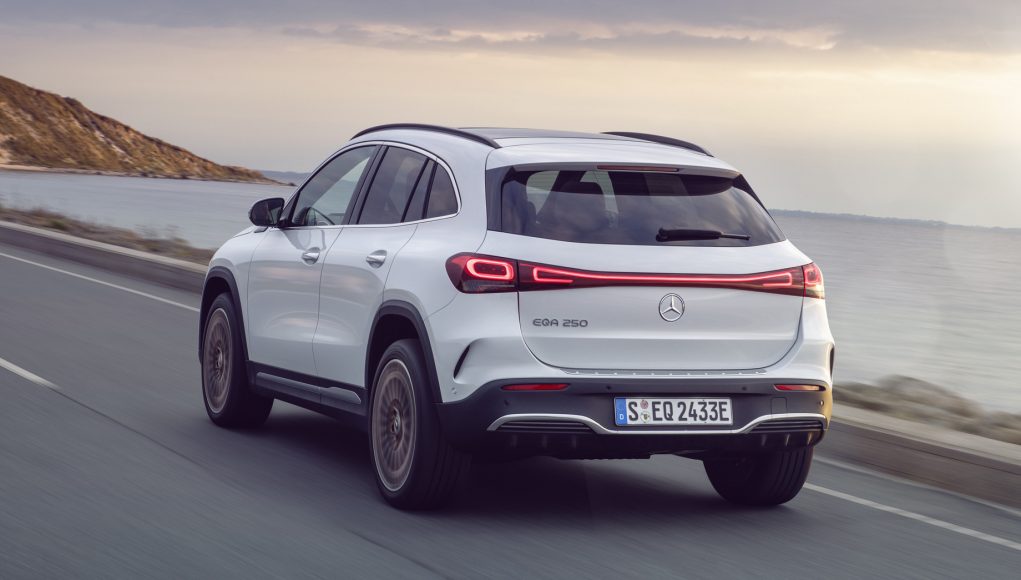 The groupation behind the luxury car manufacturer Mercedes-Benz, Daimler, recently confirmed that it planned to speed up the electrification of its product range. The plans were announced officially and in line with the announcement of the new electric SUV for the German brand, the Mercedes-Benz EQA.

This vehicle was designed to battle a lot of prejudice and rumors that the brand has had when it comes to electrification. Despite its success in the hybrid-powered F1 championship and the recent Formula E entry, the brand is kind of behind when it comes to all-electric road cars. In that manner, the EQA comes at the perfect time, as the entry-level model into Mercedes’ growing range of electric cars.

The EQA comes as a successor of the Mercedes-Benz EQC model, which was the first electric SUV from the three-pointed star. It has more modern features and an adapted chassis based on the GLA crossover. The lightbar at the rear makes it similar to the Polestar 2, Audi e-Tron GT, Porsche Taycan and many other EVs.

Different from the concept that the brand revealed at the 2017 Frankfurt motor show, the EQA uses the Mercedes MBUX platform as the go-to interface. It makes swiping through songs and controlling the vehicle a breeze, all thanks to the 10-inch touchscreen and the voice-enabled ‘hey Mercedes’ feature.

In terms of driving it, the Mercedes-Benz EQA brings a new character to the brand’s lineup. Using a single electric motor with 187 horsepower, the EQA 250 has a 66.5 kWh battery pack and a range that stretches to 263 miles. However, the brand announced that this model is the entry-level one, and will be joined by higher-spec EQAs in the future.

The goal of the prestigious German car maker was to create a ride that is quiet and smooth on motorways, and equally relaxed around town. The EQA delivers that and more, prioritizing on comfort and range.