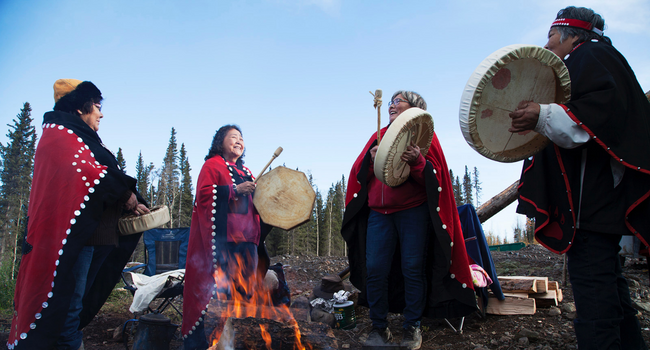 Many people likely don’t know about the close connection between residential “schools” in Canada and ongoing resource extraction on Indigenous lands. In 1951, the federal Ministry of Mines, the “Indian” Agent, the Catholic Church and wealthy business owners coordinated to remove Tahltan children from their homes and families, as part of an attempt to get at the rich stores of minerals in the Sacred Headwaters in northern British Columbia.

That’s just one of many revelations in the powerful new film The Klabona Keepers, about the Tahltan Nation’s struggle to protect the Sacred Headwaters, or Klabona, from mining.

(The film, co-directed by my grandson Tamo Campos, is a collaboration between non-Indigenous filmmakers and Indigenous elders, who were given ownership of the intellectual property. All proceeds go to youth programming at the Klabona Sacred Headwaters.)

Drawing the connection between the not-so-distant past and the present, spokesperson Rhoda Quock says (as quoted by her husband Peter Jakesta), “They stole the children from the land. Now they steal the land from the children.”

It’s a story we hear too often, but rarely told with such passion as by the elders and families in this film.

The Sacred Headwaters are where the salmon-filled Skeena, Nass and Stikine rivers originate. It’s one of North America’s last intact freshwater ecosystems. The Tahltan, who have lived in the area since time immemorial, know it as Klabona. It’s a vast area, rich in bears, caribou, moose and other wildlife — and, yes, fossil fuels and minerals.

The film portrays the area’s immensity and beauty, and the Tahltan people’s ongoing relationship with its land and waters. It’s a relationship governments and churches tried to break when they took children from their families and communities and forced them into residential institutions throughout the 1990s. These horrific abuses and rights violations were aimed at extinguishing languages and cultures, and dividing people from each other to ease the way for industrial and mining interests.

In Klabona, as in so many places, having families and communities torn apart took a tremendous toll, and many who were in the institutions or relatives of those taken turned to alcohol to numb the pain and loss they suffered.

But as more mining companies started moving into Klabona, many Tahltan realized it was time to reclaim their strength, to protect the land and thus themselves from those who would destroy the mountains, valleys, rivers and lakes they have lived in harmony with for millennia. Elders from the village of Iskut, the Klabona Keepers, took on the responsibility.

But as more mining companies started moving into Klabona, many Tahltan realized it was time to reclaim their strength, to protect the land and thus themselves from those who would destroy the mountains, valleys, rivers and lakes they have lived in harmony with for millennia.

’s been an ongoing struggle with mixed success. After much opposition and protest, the Red Chris copper-gold mine on the northwest side of Klabona started production in 2014. But by occupying drill sites, protesting and blockading, the Tahltan prevented Fortune Minerals from developing a massive open-pit coal mine on Mount Klappan in the heart of Klabona. That eventually led to the 2017 Klappan Agreement, which protected 286,000 hectares from major industrial activity. But mineral exploration continues to increase outside of the protected area.

The more we learn about Canada’s history and the appalling racism behind the push into Indigenous territories in search of exploitable wealth, the more we see how Indigenous Peoples have been paying the price and reaping few of the benefits of our extractivist economy — from fracked landscapes in northern B.C. to polluted lands and waters in the oilsands to the mercury-poisoned rivers of Grassy Narrows and beyond.

The Western way of seeing compartmentalizes and reduces phenomena to their constituent parts, often ignoring the bigger picture. But everything in nature is interconnected, so even seemingly insignificant actions can have cascading effects.

In many ways, Western science is just starting to catch up to the knowledge of peoples who have lived in place for thousands of years. We need to expand our vision and in doing so recognize that most or all of today’s crises — from climate disruption to biodiversity loss to growing inequalities — are rooted in the same blinkered mindset and values.

We can no longer afford to elevate the economy over the planet’s life-support systems. Consuming more and chasing endless growth does not bring well-being or happiness; embracing with wonder and love the phenomenal interconnections that bring us together on this small, generous world is better for individual, community and planetary health and well-being.