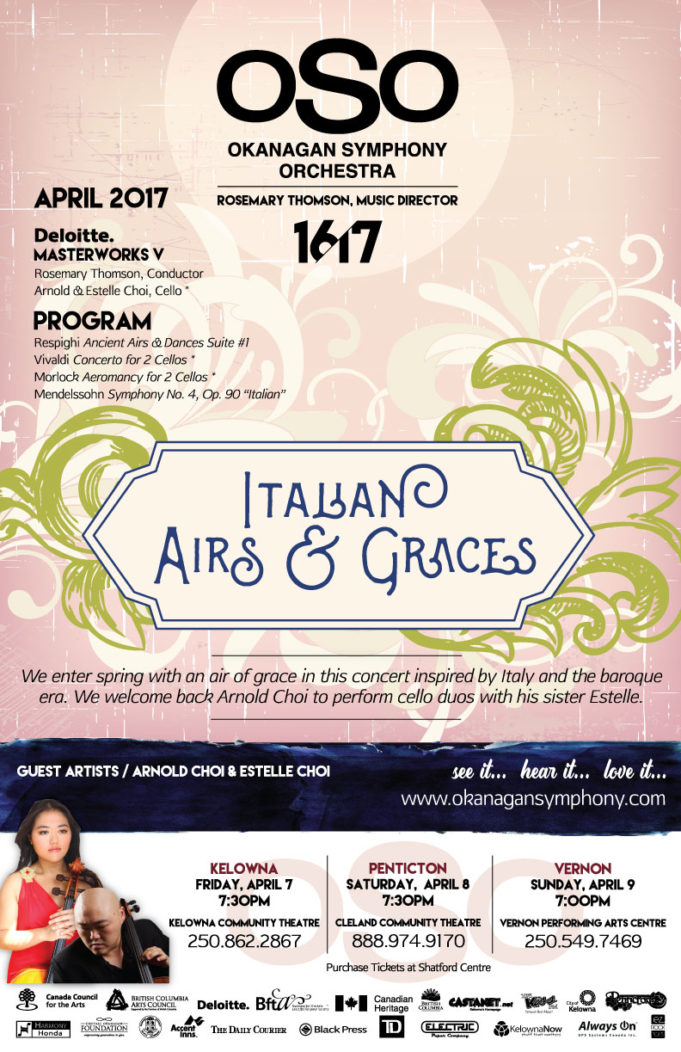 (Kelowna, BC, March 27, 2017) – The Okanagan Symphony Orchestra (OSO) is excited to welcome Arnold Choi and Estelle Choi, the extraordinarily gifted brother and sister who will present two stunning duo works for cello and orchestra – Vivaldi’s “Concerto for 2 Cellos” which is full of bubbly musical conversation and “Aeromancy” by Canadian Jocelyn Morlock, a work of great beauty inspired by divination through observing the air around us.”Italian Airs & Graces” opens in Kelowna on Friday, April 7 at 7:30pm (doors open 6:30pm) with performances in Penticton Saturday, April 8 at 7:30pm (doors open 6:30pm) and Vernon on Sunday, April 9 at 7:00pm (doors open 6:00pm). Tickets are $56.25 for adults; $49.00 for seniors and $26.75 for youth; the OSO also offers the front three rows of seating for $25 in all three theatres. Tickets are available for the Kelowna concert by phone through Kelowna Tickets or by phone 250.862.2867; for the Penticton through the Shatford Centre or by phone 888.974.9170 and the Vernon & District Performing Arts Centre phone 250.549.7469 or online via www.okanagansymphony.com.“We enter spring with an air of grace in a concert inspired by Italy and the baroque era Respighi’s “Ancient Airs and Dances” offers elegant miniatures inspired by lute songs from a bygone era. Mendelssohn’s most popular symphony brings beautiful Italian nuance to a rigorous Germanic form,” comments Rosemary Thomson, Music Director, Okanagan Symphony Orchestra.” We are very excited to welcome back the incredible Arnold Choi to our stages along with his very talented sister Estelle Choi, Estelle will be on our stages for her Okanagan debut.”Arnold Choi is the principal cellist of the Calgary Philharmonic and has performed to great acclaim throughout North America, Europe and Asia. A prizewinner at Korea’s Gyeongnam (Isang Yun) International Music Competition, Mr. Choi has also won first prize at the Pasadena Showcase Instrumental Competition, the Kingsville International String Competition, the Canadian National Music Festival and the Montreal Symphony Orchestra Competition, among others. In the summer of 2008, Mr. Choi received the grand prize at the International Stepping Stone competition in Quebec City, and in 2012, received second place at the Carlos Prieto International cello competition in Morelia, Mexico.“It was one of those performances where the soloist (Arnold Choi) knocks the ball right out of the park. Tone, technique, and heart, Choi has it all. Moreover, his playing seemed to elevate that of the entire orchestra. At the Concerto’s conclusion the audience erupted. Besides the applause and bravos, there was whistling and shrieking. One might have thought Choi was a rock star, but star he is, indeed,” concert review from Arnold Choi’s previous performance in the Okanagan.A native of Calgary, Alberta, Estelle Choi began her musical studies at the age of five under the tutelage of John Kadz at the Mount Royal College Conservatory. Even at an early age, Estelle began to show promise as a cellist with her numerous awards at the local, provincial and national level. As a soloist, Estelle has taken many first prizes in the Calgary Kiwanis Festival, the Alberta Provincial Music Festival, the Calgary Concerto Competition, and the Canadian Music Competition. Estelle recently performed the Shostakovich Cello Concerto No. 1 with the Colburn Conservatory Orchestra.The Okanagan Symphony Orchestra is the third largest professional Symphony Orchestra in British Columbia, entertaining residents of the Okanagan Valley and visitors from around the globe with symphonic music since 1960. To learn more about the Okanagan Symphony Orchestra visit their website at www.okanagansymphony.com