The National Film Board of Canada (NFB) is delighted to announce the virtual cinema release of its co-production Sovereign Soil, through the Rotary Centre for the Arts in Kelowna, starting Friday, June 12, 2020.

The film will be available for at least four weeks.

Audiences from coast to coast will be able to book tickets through their favourite indie cinema theatre, to support their local venues during the pandemic.

Curtis is available for interviews via phone or Skype/Zoom from his home in an off-grid area near Dawson City.

Sovereign Soil explores the myth of the rugged individual living “off the land” through the lens of contemporary people who are actually doing it.

In the process we discover that there is much to be learned from these people and their way of life, especially the Tr’ondëk Hwëch’in (pronounced [TRON-deck gwich-INN]) First Nation, who have lived contentedly in this challenging environment for thousands of years.

The film and its eloquent director offer reflections on the inter-dependence of culture, communities and nature in relation to food sovereignty and finding a better way forward—as well as hope and inspiration for audiences in these pandemic times.

It was produced by Shirley Vercruysse at the NFB’s BC & Yukon Studio in Vancouver, in co-production with Andrew Connors in Whitehorse, YT. 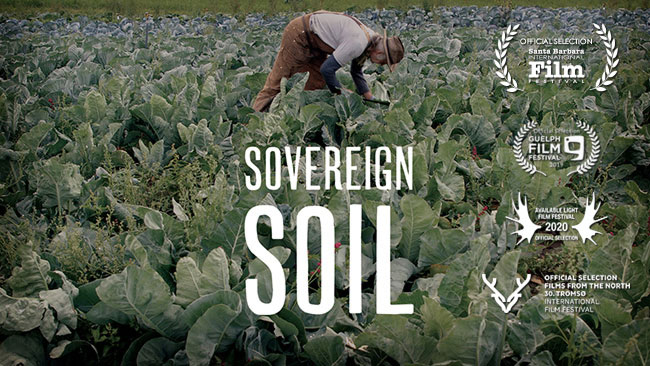 The National Film Board of Canada
and Jackleg Films proudly present

At the far-flung edge of Canada’s boreal forest, outside the tiny sub-Arctic town of Dawson City, Yukon, a handful of unlikely farmers are growing everything from snow-covered Brussels sprouts to apples. These modern-day agrarians have carved out small patches of fertile soil in an otherwise unforgiving expanse of
isolated wilderness to make a living and a life.

Over the course of a year, Dawson filmmaker David Curtis follows these resilient, unassuming farmers—including a German immigrant, a young family that taps birch trees for syrup, a First Nations youth, and a matriarch who can shoot and quarter a moose—exploring life, death, and time through the simple, rich day-to-day of
people deeply tied to the wilds.

Sovereign Soil is an ode to the beauty of this ferocious, remote land and the wisdom of those who’ve chosen to call it home.