It may have been cold and drizzly outside but it was sizzling hot inside Prospera Place Thursday night as Santana made his Kelowna stop on his Divination World Wide tour.

Cited by Rolling Stone Magazine as 15th on its list of 100 Greatest Guitarists of All Time, the legendary Carlos Santana delivered his signature sultry guitar work to thousands of fans who packed Prospera Place. 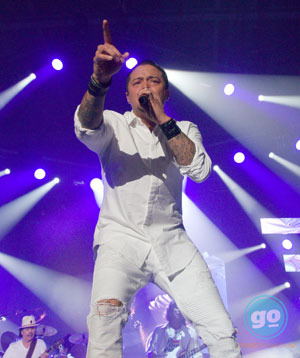 For more than 40 years, Santana has been a leader in world music. The band was impressive, with Ray Greene on vocals and trombone, Andy Vargas on vocals, Dave Mathews on keyboard, Benny Rietveld on bass and Tommy Anthony on guitar and vocals.

The rhythms, provided by Paoli Mejías and Karl Perazzo on percussion and Santana’s wife, Cindy Blackman Santana, on drums, were intoxicating.

Leading with early Afro/Latin blues/rock fusion music, such as Soul Sacrifice and Jin-go-lo-ba, it wasn’t long until Prospera Place was transformed into a full-out Latin dance party. The band was also dressed in white, adding to the tropical feel of the concert.

Carlos Santana, wearing his iconic hat, kept the chat to a minimum, but did talk to the crowd about thinking outside the box saying “Anybody who comes to a Santana concert runs away from normal” before launching into Total Destruction of the Mind that started off with the lyrics, “Sitting on a cornflake, riding on a roller skate.”

As part of the set, Santana paid homage to both jazz legend John Coltrane as well as rock guitarist Jimi Hendrix. He also added familiar riffs from songs such as the Rolling Stone’s Satisfaction and the Beatles’ Daytripper to the performance.

Santana’s encore included an extended drum solo from Cindy Blackman Santana, who mesmerized the crowd with her passion.

Blackman Santana was spotlighted on an otherwise dark stage, with a large screen behind her showing her arms flying and feet moving with incredible energy more than two hours into the show.

Her proud husband told the audience his wife did a different solo every concert, comparing her to ice cream, cake and pie.
Also part of the encore was Smooth, which won the 1999 Grammy award for Record of the Year.

The final song Love, Peace and Happiness from the Power of Peace album was performed with impressive positive energy, warming the crowd before releasing them into the cold damp night.

Carlos Santana Live in Kelowna BC
1 of 10