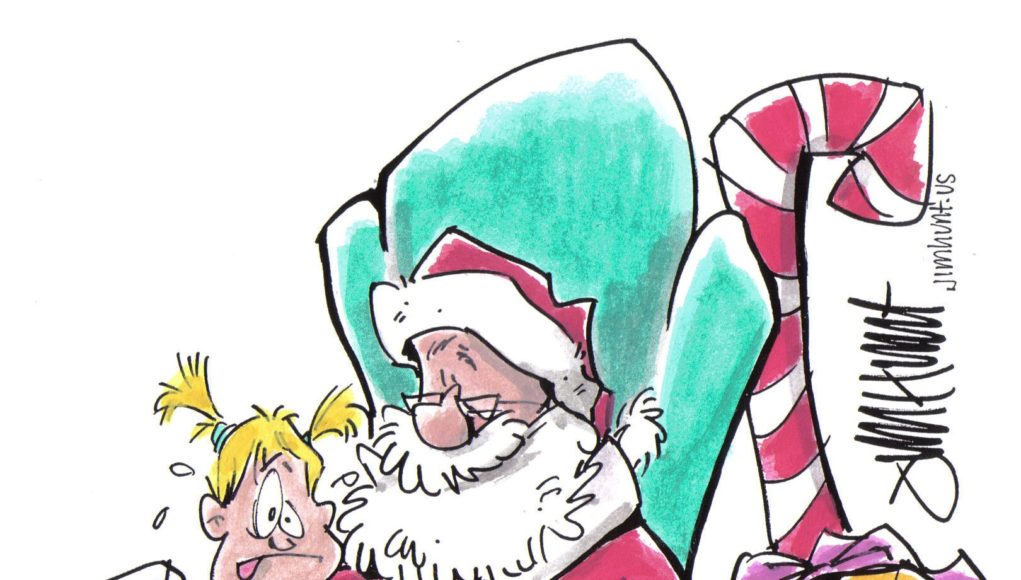 I remember what Christmas felt like when I was a little girl: it felt magical. This was in large part because of the big, jolly guy in the bright red suit.

You know the fella – Santa Claus. He was as old as my grandparents, maybe even older. And while I loved my grandparents with all my heart, this mythical man I saw once a year had a significant impact on my childhood as well.

I didn’t start out loving him. As a baby and a toddler I was terrified to go anywhere near him and there are pictures to prove it.  But he was an effective role model during my formative years, despite our somewhat rocky start.

It wasn’t just at Christmas that I thought of him. For some reason I had it in my head that Santa and God were best friends and were watching me throughout the year, keeping tabs on whether I’d been bad or good.  I imagined they had a tally sheet with two columns: naughty and nice, and they would make check marks accordingly.

One year when Christmas rolled around I wondered if I’d get any presents at all. I was a good kid and usually did what I was told, but sometimes I messed up. What if I got extra points under the naughty heading for that time I scared my younger cousin by pouring a bucket of cold water over him? Or what about the day I dropped my younger brother on his head?

I agonized over my crimes and expected to get nothing except a lump of coal in my stocking. Ironically, I had no idea what a lump of coal even was, I just knew I didn’t want one. What a nice surprise to get real presents instead. Could it be that the good things I did and nice thoughts I had outweighed the bad?

Questioning my parents, they told me that it was okay to make mistakes, it just wasn’t okay to not always try my best.  So I tried to get more check marks under the “nice” column after that. It was important that Santa and his best friend were proud of me.

Getting to play with my cousins added to the enchantment of Christmas. Even though they didn’t live far from us, we didn’t spend a ton of time with them except on special occasions.  And every Christmas afternoon we’d get to see them and spend the rest of the day and night playing.

We would excitedly tell each other all about our eventful mornings and what Santa brought. We’d play games, eat goodies and listen to our little cousin tell joke after smutty joke. Even at the kids’ table with the grownups nearby, David would continue to make us giggle uncontrollably with his off-colour humour that was far beyond his years.

Now that I’m a mother, I feel fortunate to have experienced the magic of Christmas through the eyes of my own children. I found it interesting how delighted our kids got about the exact same things that I did: Santa Claus and playing with their cousins primarily.

Now that they’re 12 and 15 we don’t visit Santa at all anymore, but hanging out with their cousins is their biggest holiday perk. Spending time with great grandma, grandparents, aunts and uncles is a wonderful blessing as well. My mother will sure be missed though. As will my grandparents who are no longer with us, and our dog who’s been missing since March. Loving memories of the departed, combined with new memories of the living will be our cherished gift.