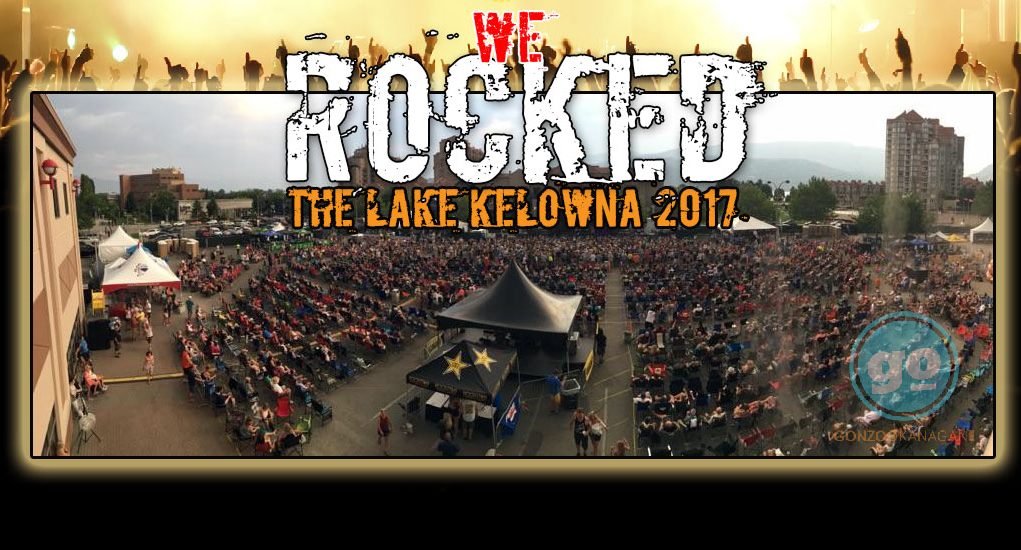 Music fans converged on Prospera Place last weekend for the 2017 Rock the Lake festival. A stellar line up of Canadian bands brought locals and visitors to the sold out three day festival.

Saturday saw a pair of incredible women of rock on stage starting with the Headpins, who were a late addition to Saturday’s line up. The Headpins, who have been going strong for over 37 years, have begun a new chapter with singer Katrina Lawrence, who joined the Headpins after Darby Mills left to pursue the Darby Mills Project.

Lawrence gave a high energy performance, flicking her hair and looking ultra-cool in her aviator sunglasses. She revved up the crowd with Headpins hits such as “Don’t It Make You Feel“.
Lawrence blew kisses at the end of the set to show her appreciation.

Juno-award winner Sass Jordan took to the stage next with her soul and blues infused rock. The sultry singer who has sold over one million CDs world-wide lit up the stage with hits like “Make You a Believer“.

Although the valley smoke began to clear by Saturday afternoon, there was some smoking hot guitar work as Rik Emmett, founding member of Triumph, took to the stage. Emmett, who left Triumph in 1988 to pursue a solo career, opened with the Triumph hit “Lay it on the Line“.

The audience ate up new and old songs, from 1986’s “Somebody’s Out There” to “Human Race” from his recent album RES9 and sang along with the 1977 cover of “Rocky Mountain Way“. He finished up his set of high octane rock with “Fight the Good Fight“.

Kim Mitchell closed out the night, looking energetic on stage following his 2016 heart attack. He opened his set with “Lager and Ale“. Gone are the long locks from the 80s, but the iconic Kim Mitchell sound remains.

Mitchell acknowledged the passing years by telling the audience when the classic bands get together at the hotel, they have more drugs than a cartel – adding they were prescription drugs from their doctors.

Mitchell had fun with the audience, singing numbers such as “Lemon Wedge“, with lyrics like “You can be my lemon wedge and I’ll be your tequila”, and plucking his guitar to sound like a chicken.

From the high-energy “I am a Wild Party” that had the crowd shouting to the slowed down rhythmic version of “Easy to Tame“, Mitchell captivated the audience.

Along with his solo music, Mitchell also performed Max Webster hits such a “Diamonds, Diamonds“. A consummate performer, Mitchell teased the crowd with his so-called complaint that his water wasn’t the right temperature.

When he performed “Patio Lanterns“, the audience could be heard singing along and reminiscing with the 1986 hit. Even the late evening rain failed to dampen fans’ spirits.

Sunday brought clear sunny skies. After Carole Pope (from Rough Trade) and Helix did their set, Chilliwack took the stage. Fans were thrilled to hear Chilliwack open with some of their greatest hits such as “Lonesome Mary“, “Whatcha Gonna Do“, “California Girl” and “I Believe“.

Along with the familiar songs of the past, Chilliwack performed newer music such as “Solar High“. Their performance of the 1978 hit “Baby Blue” had the crowd swaying and couples dancing.

Fans of the classic rock band had pulled out their records in anticipation of the concert, mystifying their children who thought they were the largest CDs they had ever seen.

Chilliwack finished with “My Girl (Gone, Gone Gone)” and the harmonies were as sweet as when the song was originally released in 1981. After fans screamed for more, the band returned to the stage for “Fly at Night“, with the crowd singing along to the familiar song.

There was plenty of dancing, singing and photos taken as fans enjoyed the music and the camaraderie of the festival. Tickets are on sale now for Rock the Lake 2018 Aug. 10 to 12 at SelectYourTickets.com. The lineup has yet to be announced.

ROCK THE LAKE 2018!
First round of GA weekend passes released

Go here to find out more!