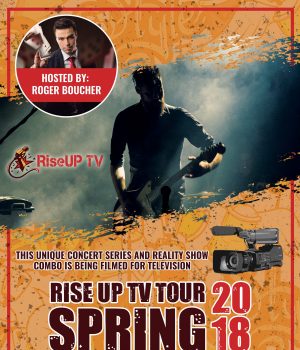 “RiseUp TV” is a globally distributed TV show, introducing the world to the personalities, sights and sounds of artists of all genres and ages from Canada, the US and Europe! The 12 episodes will be largely constructed from footage obtained during the massive undertaking of a 12 city tour starting on May 20, 2018, in Victoria,B.C. and ending in Montreal, QC on June 2, 2018. The spectacle is made even more insane by the mode of transportation for the artists. The artists will be travelling in a chartered bus together and going coast to coast, performing at the shows along the way. The evening is hosted by hypnotist / Magician Roger Boucher and will be approximately 2.5 hours each night. The footage collected from the shows, bus trip, hotels and adventures along the way, will be assembled into 12 episodes, with the goal of also highlighting each city along the way, with it’s own episode! This will be not only a great example of life in today’s music industry, but a tremendous avenue to promote the beauty and landmark’s of each city involved!

There are several local artists from the Okanagan that are joining the Western Canadian leg of the RiseUp TV Tour, including Vernon EDM artist, ‘Enevold’, who has recently released a single called ‘Space Machine’; Kelowna singer-songwriter, Renita Zintel, a talented and passionate musician, currently working on a new EP; and Penticton rock-alt band, Three Scotch In, who are currently recording their debut album with producer and manager, Kyle Haynes.

Each city along the way, has venues, artists, businesses, charities and celebrities that represent it’s background and culture. The goal of RISEUP TV is to blend those together, to create a “hometown feel” to the actual live shows, which will come across in the editing of the cities episodes later! In each city, the arts and business community are encouraged to get involved, show themselves and be a part of the live show, but also become involved on the corporate level as well, to help tighten relationships within the communities. IE: The cities will “show well” on the episodes, with cooperation between the various aspects of the community.

SPONSORS AND PARTNERS THAT WE WOULD LIKE TO THANK: