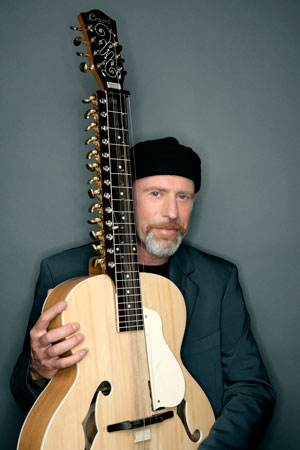 For Immediate ReleaseBehind The Music – “Mysticssippi” Blues Man Harry Manx“Mysticssippi” Blues Man Harry Manx has spent years fusing eastern & western musical traditions with the blues. Switching effortlessly between conventional guitars, harmonica, banjo and the Mohan Veena “creating musical short stories that wed the Blues with the depth of classical Indian ragas”.Manx is a prolific artist, releasing 12 albums in a 12 year span with no signs of stopping. He has received seven Maple Blues Awards, six Juno nominations, CBC Radio’s ‘Great Canadian Blues Award’ & received yet another Juno nomination in 2010 for ‘Blues Album of the Year’ for his release “Bread and Buddha”.Born on the Isle of Man, Manx immigrated to Ontario with his parents when he was a child. Harry forged his distinctive style by studying at the feet of masters. During his formative years, he worked as a sound man in the well-known El Mocambo blues club in Toronto and later engaged in a rigorous tutelage with Vishwa Mohan Bhatt in India. Bhatt was the inventor of the 20-stringed Mohan Veena, which has become Harry’s signature instrument.Manx’s time in India imbued his music with an intangible spiritual quality. “A song reveals who you are, it’s the vehicle for your message, your inspirational ideas or your story,” explains Manx, “Like many people I’m interested in my own development as a person and that’s represented in my songs. I’m searching for truth through art and spirituality. My songs are a synthesis of everything I’ve absorbed, all my experiences and I share that. I’m glad that it means something to people.”Harry’s new CD “Om Suite Ohm” is now available and is the first CD to feature his ‘Bollywood style’ electric slide techniques. He is joined by a fantastic group of musicians on the album playing Indian, African and western style instruments. The CD features the song “Carry My Tears” which recently earned Harry a Western Canadian Music Award nomination for ‘Songwriter of the Year’.Website: http://harrymanx.com/