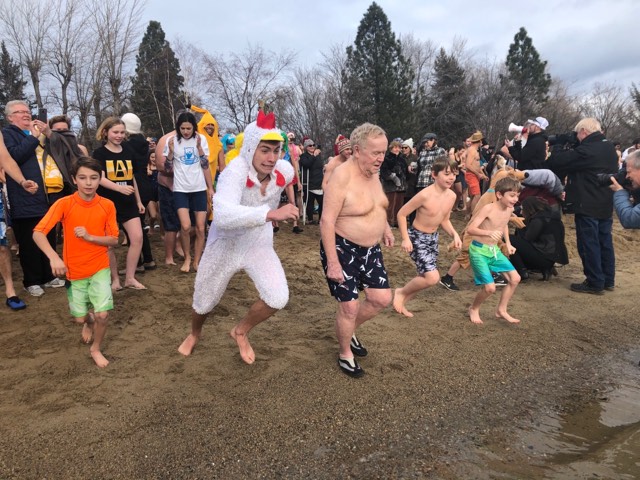 POLAR BEAR DIP RAISES OVER $18,000 IN BIGGEST PLUNGE TO DATE

Hundreds plunged into the icy waters of Okanagan Lake at Sun-Oka beach in Summerland for the 35th annual Polar Bear Dip on New Year’s Day. This was the biggest turn out yet, said organizers.

But it isn’t just the fact that hundreds actually decide to dip their bodies in freezing water for fun, it’s that a good majority don all sorts of crazy costumes to do it.

The youngest polar bear dipper was six and the oldest was over 80 years of age. Polar plungers come in all shapes and sizes, sharing a common craziness that bonds them together for the day.

The Summerland Kinsmen Club has organized the Polar Bear Dip for all its 35 years and this year was their biggest turn out yet. They raised money through the sale of Polar Bear Dip T-shirts, hot dogs, and hot chocolate.

After all the happy dippers went home, the fires on the beaches were put out and Sun-Oka’s shores were returned back to their quiet calmness, Kinsmen president Blair Gillingham said they raised $18,000 from the event. All the funds raised stay in the community of Summerland.

In Kelowna, at Tugboat Bay, a similar fundraising Polar Bear Plunge took place with similar amounts of people eager to take the plunge. It’s a refreshing way to start a new year. Feet cramp a bit from the cold of the water but the rest of your body responds quite favourably to the whole experience. It cures any lingering hang over.