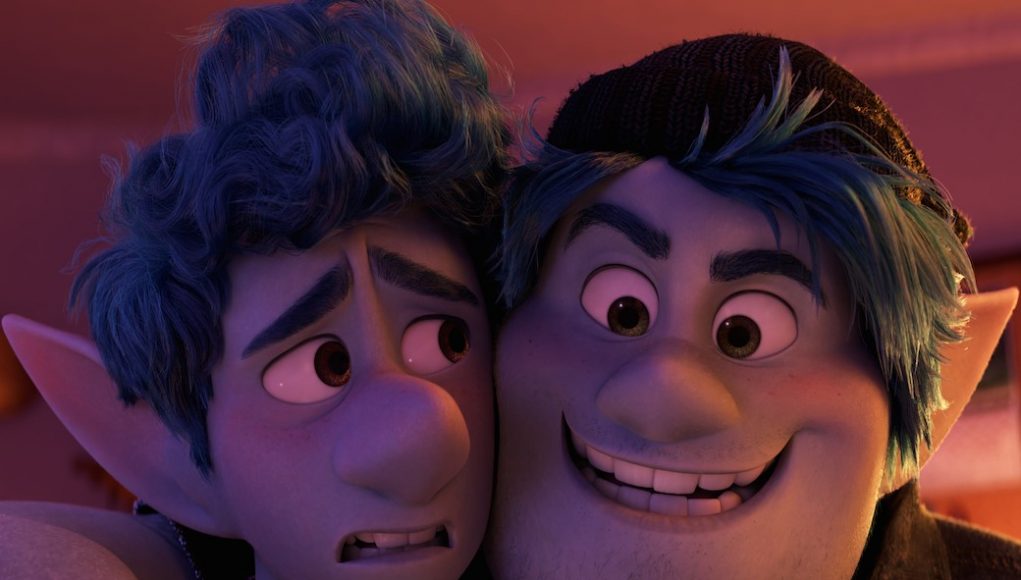 You won’t see Chris Pratt or Tom Holland in their new movie. Pixar’s latest Onward uses their voices for elf brothers Ian (Holland) and Barley (Pratt). Gonzo got to see Pratt and Holland in person though at the Los Angeles press conference for Onward.

In the world of Onward, Ian learns a magic spell that can bring their father back to life for one day. The spell only half works, leaving their fathers’ pants, so the brothers go on an adventure to try to complete the rest of the spell. Onward is in theaters Friday, March 6.

Q: How did you relate to your characters in Onward?

TH: It’s interesting. I’m the oldest brother of four and Chris is the youngest brother of two. So we kind of switched. So now I’m playing the younger brother and he’s playing the older brother, so it was really nice for us to kind of make that switch. What drew me so much to this character was that we get to see that entire journey that we went on as a kid in him throughout this film. So I just was really happy to pour my past experiences into this process and I’m really delighted and thrilled to where we got to.

CP: One thing I really like, and I’m not sure that it was ever intentional or I just noticed this while watching the movie but it was a note that [director] Dan [Scanlon] gave me that was actually against my own instinct. But I’m very glad we went with what he wanted to on this which was Barley was never jealous of the fact that he didn’t have the magic gift. To me, I didn’t realize until seeing the movie, something very similar to my own relationship with my brother in which I was the Ian. I was the younger brother.  My brother did all these assemblies in high school so I followed his footsteps. I did all these things. Anyway, he went into the Army. He didn’t become an actor but I became an actor. There was that moment where Barley realizes that Ian has the gift and he comes in and the line, my instinct was do you think Barley wishes that he had the magic gift because he’s the one who loves magic? He wasn’t able to do this but his younger brother was. That’s what makes this brotherhood, this relationship so special. That’s why grown men come up to me and say, ‘Wow, I really was moved. I really cried. This is like Field of Dreams or Radio Flyer to me.’ The reason why is because it celebrates a love between two brothers and that brotherhood. Oftentimes that’s not something you see in movies. I really like that and identify probably more with Ian in terms of my own relationship with my brother, but I really love that. I’m glad that you stuck with that because that’s great. I’m always bullying directors into doing what I want to do and I couldn’t do that. He just made me do exactly what he wanted all the time and I’m just so glad. Your vision is all over this thing. It’s really, really good. It’s very special. Like Bong Joon Ho said about Martin Scorsese quote. He said something like the more personal you are, the more creative it is. The more personal you are, the more original it is or something like that. This is so personal and so creative and so original.

Q: Did you ever get to record the voices together?

CP:  It’s not the most conducive to creating clean audio tracks that are usable in the movie so ultimately you may see something you’d like to model behavior on and then capture that with us separate. That was oftentimes the case I think. On Lego Movie, we did a lot of riffing. There’s a lot of improv comedians in there and there’s a certain magic that’s found in the moment that doesn’t exist on the page. I don’t think that there was a lot of that in this because what’s on the page here was so magical and so protected. So we didn’t coloquialize a ton. Maybe a little bit but for the most part everything we say was what was written in the script. So they isolated us to do that but at the same time they brought us together so A, so we could shoot some promotional stuff of Tom and I together because let’s talk about the chemistry here. Now you know why it’s called chemistry. You throw two chemicals together and it’s an explosion sometimes, a chemical reaction. You want to get that heat. That’s why they sat us next to each other on this couch. So they did throw us together but we had to shoot it and record it. They were able to see: wow, look at these two. They’re like brothers. This is how they interact

Q: Ian turns 16 and learns to drive in this film. Do you have any advice for young viewers who are about to get their drivers’ licenses?

CP: There’s one really good thing that I learned right when I was learning to drive which was the chunk of cement closest to your house connects to every major monument in this country through a system of roads. Whatever cement your driveway connects to a road, that connects to another road, to a highway. With enough gas money and an automobile, you can see Mount Rushmore. You can see the Grand Canyon. You can see Yellowstone. You can see the White House. You can go down to the Florida Keys. You can sneak through Montana in about 17 days. This is a great, beautiful country. It was designed to be driven across so definitely live in the city and not have to drive in the city, but don’t sleep on getting behind the wheel and just exploring this country because we used to road trip everywhere and it’s America. It’s the big wide frontier and you can literally get anywhere if you have enough gas money.