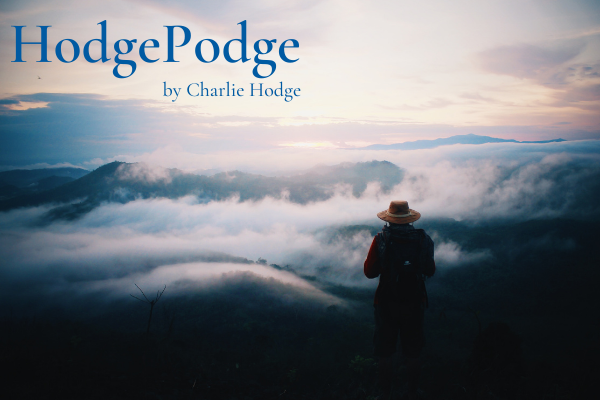 It was akin to finding buried treasure.

The first thing my eye spotted opening the old cardboard box of long forgotten ‘junk’ was my ‘lost’ Boy-Scout-million-and-one-gadget-knife. Hadn’t seen it for at least 30 years. Simply holding it transported me back to a special place in time.

“Just what in the name of the Lord do you think you are doing with that,” the weathered, gnarled face, framed by an exaggerated set of ears, bellowed. “My saints and Aunt Hanna boy, that is not how you carry a knife.”

The sinewy man was no more than five foot-eight inches, but his sleek frame promised a powerful strength and toughness coiled within. Great creases and scars crossed his forehead like trenches dug across a battlefield. Straight, jet-black hair combed flat back only added contrast to his large, bulbous, red nose and flaming red face. He was imposing.

“What ya was – was not thinking. You were stupid. Stupid dies. Knives aren’t toys – they’re meant to do one thing and one thing only, cut. They do it very well, especially if the person with the knife is very good, or very stupid. You are being stupid. Put the knife in its sheathe, now!”

My childish frame shuddered fearfully as I whisked the knife into its cumbersome pouch. It was the first time in my life Robert Nelson Stevens barked and I jumped. That one-sided conversation was the start of a wonderful friendship. I was nine years old; Old Steve was 50-something.

Still at cub camp the next day, held at the Okanagan Anglican Church Camp on the shores of Okanagan Lake, ‘Old Steve’ taught me how to clean a Rainbow trout. The grizzled ole camp caretaker was a master when it came to using a knife.

The varied lessons never really ended from that day on. For the better part of the following 30 years Steve remained one of the major influences in my life. In many ways, Steve was my second father, giving me many valued lessons and memories, and a glimpse into several worlds I would have never known otherwise.

‘Steve’ was one of 10 children, born to a B.C. miner-blacksmith and his wife, near the turn of the century. When he was seven his mother died, so along with several siblings, he was sent to an orphanage. Such facilities were not pleasant spots and school lessons came hard. Steve suffered numerous strappings and rods for failing to memorize an entire page of scripture by day’s end. On his 13th birthday he was turned out onto the streets of Vancouver, no longer considered a ‘child’, nor the responsibility of anyone.

He found work at a ranch busting horses, but a horse busted him instead, crushing in his skull with a hoof. He survived the kick. but suffered bouts of epilepsy the rest of his life. Healed of horses, Steve went to work at a mill for a few years, learning a trade in carpentry. However, the depression years hit hard and closed much work down.

For over a year Steve rode the rails as a hobo looking for work throughout the nation. Like thousands with him he discovered work was scarce and times harsh. Eventually, he sought a wilder yet safer world, and headed into the Cariboo, then northern B.C., Alaska, the Yukon and the Northwest Territories looking for gold, trapping fur, and leading pack-trains. Several years later, filled with frozen fingers and battles with bears and wolverines, Steve wandered his way back down into Alberta. The call for able men had reached even the north, and Steve was finally needed.

However, even the army turned Steve away. His epilepsy denied him entry. Instead, he was given work building military facilities. Trained carpenters were valued and drafted to work for needs of the cause. Steve moved from one work yard to another – Penhold, Esquimalt – wherever orders were given. When war ended he continued working as a shipwright, despite breaking his back falling from a scaffold. He met a young lady, married, and started a family. Within a few years Steve was offered a position building boats in Victoria, but his wife wanted no part of the move. Steve took the job saying he would return home on weekends. When he came back the following weekend, his wife was gone. So were his kids.

Steve began drinking that day and never stopped for 13 years. Most of that wasted time was spent on Vancouver’s Skid Row, though again he rode the rails of Canada numerous times. He frequented numerous drunk tanks and jail cells across the land. Then, one day he simply decided he had had enough, and quit drinking.

Soon after leaving booze, doctors told Steve he had leukemia and would not live long. Refusing to be hospitalized, he bought himself a pack board and literally walked into the interior of the province, over the Rockies’ Coastal Mountain Range.

Five months, three broken ribs, 14-pounds lost, and a rattlesnake bite later, Robert Stevens arrived in Kelowna fit and lean. Within a few weeks he had procured the job as caretaker of the Anglican Church Camp facility. His leukemia was miraculously gone!

Soon after, Steve became a regular member of our household, a frequent for Sunday dinners, always at Christmas, and even occasional visits to the rink to watch me play hockey.

Most often we spent our time fishing, or alone in the hills where he and I were both happiest. He taught me how to track almost everything. We hunted, occasionally, but he knew that it was never really in my heart. Mostly we just watched, and listened, and grinned.

Many an hour was spent in his rustic cabin; wood stove roaring up a pot of thick gruel he would insist was coffee. A million and a half butts from his hand-rolled tobacco filled the ashtrays, and the stories went on and on.

For a man of little education he had read libraries of books. No greater love of books have I known. A book a day was possible for him to consume and comprehend. His language could peel bark off a tree, and no greater temper had a grizzly bear. He was a cantankerous old codger, even in his mid-life, and I loved him dearly.

Steve taught me to see things through the eyes of the hurt and lost.

Steve lost a lot of things in life: parents, family, youth, innocence and trust. He lost a wife, kids, job, control, self-respect, and 13 years. He lost a finger to a saw blade, and a hunk of another over a bottle of wine. However Old Steve found, in me, the kids he lost, the mistakes he made, and a chance to somehow try and do better. Lessons came hard in life for Steve, but in the long run he was too wise to be stupid forever.

He also saved my life, a couple of times.

One Christmas Eve a decade ago, ‘Old Steve’ who’d lived to be old after all, died. I miss him. However, I have memories and this old knife.

Hmm, I wonder what other ‘junk’ is in this box?