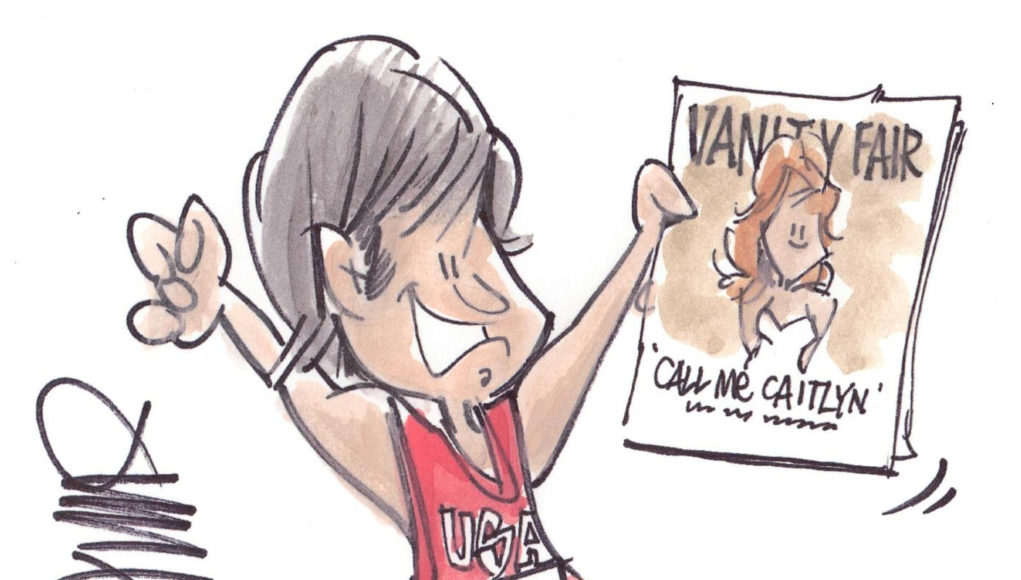 Bruce Jenner, the man who became a national hero during the 1976 Olympics, when he won a gold medal and broke a world record in the men’s decathlon event had a different kind of victory this week: he finally revealed himself to the world as a woman.

The cover and photo spread showing his new identity in Vanity Fair magazine titled “Call me Caitlyn” hit the Internet on June 1, along with a request to be referred to with female pronouns rather than male. The media quickly honored her wishes.

A Twitter page for Caitlyn was set up the same day and broke Barack Obama’s record for the shortest time to reach one million followers, achieving the mark in four hours and three minutes.

Not everyone reacted with kudos or acceptance though. Some were disgusted with the gender change and others by all the exposure this story is getting.

For the former I’d like to explore the reactions. For the latter, I chalk that up to Bruce Jenner being a member of the most famous reality TV family, the Kardashians, of which millions are tired of hearing about. Considering her new name is spelled with the letter C rather than a K like the other six women she’s related to, Caitlyn may share that sentiment on some level.

I don’t watch the popular program, but I’ve been following this particular story since the media started speculating about Bruce Jenner’s gender reassignment. Photographs taken over the last couple of years suggested that the famous athlete was taking on more of a feminine appearance through cosmetics and surgery. That was confirmed in a recent exclusive interview she had with Diane Sawyer.

Knowing Bruce Jenner as an Olympic champion since my childhood, I found this transformation intriguing. Especially since I have a friend who’s secretly been a cross dresser for decades.

To protect his identity I’ll call him John. Married with children, John and his wife are from religious, conservative families. For that reason and others he has gone to great lengths to hide his love for dressing like a woman, restricting himself to only indulging when he travels out of town.

When he came to Kelowna a few years ago from Vancouver, my girlfriend and I met up with him at a hotel and for the first time I met his female persona. She was lovely, and beyond happy in her beautiful dress, high heels, wig and make up.

The transformation took hours, and during that time our friend was like a kid in a candy store, enjoying every moment of the process with our mutual pal, who helped.

His impulse to dress like a female started when he was a young boy who felt trapped in a body of the wrong gender. As a child he hid his desire to be a girl, and as an adult he has continued to hide his cravings to be a woman. When he momentarily shared this side of himself with his wife early on in their relationship she expressed revulsion.

Not wanting to lose her, his family, or his reputation in the business community, John has tried repeatedly to put an end to these strong feelings, but he hasn’t been able to. His secret persists and anxiety over its possible discovery intensifies.

Bruce Jenner felt these same pressures and stress, with millions watching and the paparazzi documenting as much as they could. Becoming Caitlyn at the age of 65 and finally realizing her lifelong dream of being a woman has her now feeling like her authentic self.

“Bruce always had to tell a lie,” she explained in her Vanity Fair interview. “He was always living that lie. Every day, he always had a secret, from morning until night. Caitlyn doesn’t have any secrets.”

She also said she didn’t want to end her days full of regret.

“If I was lying on my deathbed and I had kept this secret and never ever did anything about it, I would be lying there saying, ‘You just blew your entire life. You never dealt with yourself,’” she said.

Living with this decision isn’t easy though. According to a recent U.S. National Transgender Discrimination Survey 41 per cent of trans or gender-non-conforming people surveyed have attempted suicide – a staggeringly high statistic. I hope Caitlyn’s experience will inspire John, and anyone yearning to live their truth, to not be afraid of what others think, to do what makes them happy, and to stay strong throughout.

Sharing her story, as others before her have done, can only help to break down the barriers created by judgment and intolerance and build a foundation for the kind of respect and acceptance we all deserve as human beings.