Home Hodgepodge by Charlie Hodge Story on Papa Thom and Night of the Arts – by Charlie... 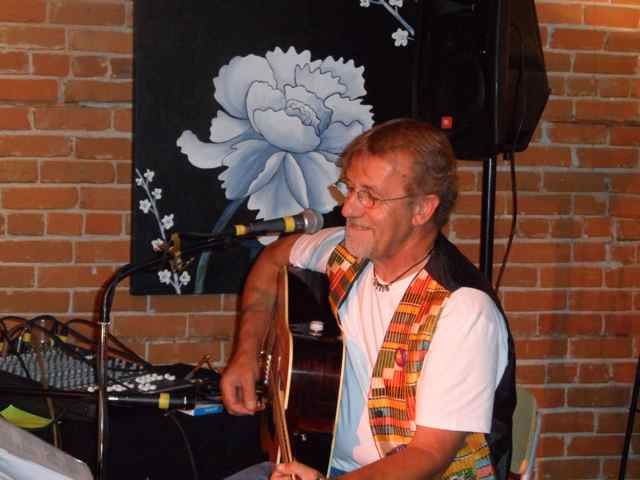 When music fans gather for this year’s annual Night of the Arts Concert Nov 16 at the Kelowna Community Theatre there will be a new face and voice to capture their fancy.  New, at least, as far as the annual fundraising concert is concerned.

However, Keith ‘Papa’ Thom is no stranger to music fans in the Okanagan – or across western and central Canada for that matter.

Papa Thom’s silky smooth vocals and engaging personality are familiar to many folks in this massive nation as Keith has literally played the country from Ontario to the Pacific. For Keith travelling the back roads and small towns of Canada picking and grinning is as much a pleasure for him as performing in major theatres and cities.

Troubadour, bard, minstrel, balladeer … Papa Thom literally fits all the descriptive terms used to describe a man who’s passion for music is only exceeded by his passion for his wife, family, friends, and his maker.

“Music has been my life since I was just a wee boy growing up in Kitchener. My brother received a guitar as a present and it sat around the house for a good year. Finally I asked him if I could try it and he said go ahead. I’m not sure I ever put it down after that,” he chuckles. “I was around 10, but I knew right then, in my heart, that I had found something I was meant to do – play guitar.

Born in 1954 Keith was one of five kids who grew up during the carefree and ever changing times of the 1960’s and 70’s – a time period when music proved to be hugely influential on the younger generation. Like many aspiring musicians it was Canadian folk legend Gordon Lightfoot that kick-started Keith’s passion to play and write songs.

“When Lightfoot’s first album came out I was stunned. I played it over and over and the obsession had begun. I was 16 and from that point on I wanted to create, and write, and perform. I quickly came to understand the impact and ability music had and has to make people think and feel,” Thom explains.

While his chosen genre of music is best categorized as folk, Keith is an accomplished singer/songwriter in numerous styles. He’s a natural on guitar with fingers flowing effortlessly over the frets. His voice is strong, diction clear, and range impressive. Of particular strength, though, is his lyrical brilliance. As a songwriter, Keith applies verbs, nouns, and adjectives to music scales like a master artist applies brush and paint to canvas. His literary work generally happens with ease.

“I write about life, about people – what they do, how they feel. I guess I analyse a lot of what I see and hear and then try to make sense of it all through a song.”

That lyrical skill snags one’s attention when listening to his current (and first) album titled Invisible. The six song album features all original tunes, each with a story of its own looking at the lives of others. The title song, Invisible is an amazing creation capturing listeners from its first note. It’s an appropriate song to be played at the ninth annual Night of the Arts concert since it is written about the life of the homeless in our country.

“I first heard Keith when he opened for Valdy last spring and I knew right then I had to have him play at the Night of the Arts,” says concert organizer and host Charlie Hodge. “Keith is a quality musician and a quality person.”

So why has it taken this long for Keith to record an album?

“I left the music world between age 23 to age 50 in order to raise a family (much of that time as a single father). More years went by just trying to earn a living. Once I decided to return to music I had a mission and a plan and one thing simply lead to another. I never had the time or the material to do a recording until a couple years ago.”

That mission and plan came about due to his personal experiences, his personal growth in faith, and an acute and sad awareness of the number of homeless and addicted people in our nation.

In 2008 he embarked on a journey which became much bigger and meaningful than he first imagined. Keith ventured from Ontario towards the west coast stopping at numerous small towns and cities along the way for concerts. However the shows were more than just music. Papa would visit shelters or food kitchens where he would engage clients and staff at such facilities in helping him prepare shepherds pies. Once the homemade meals were devoured Papa would play a concert for those in attendance. Sometimes the crowds were two or three people sometimes there were hundreds. As well, he began leaving guitars behind at various venues which had been donated to him.

“I guess the idea was to fill people’s stomachs before trying to fill their hearts and souls. It just took off. Next thing I knew folks were donating guitars to me left and right. Everything just grew from there,” he recalls.

Now a resident of Peachland, Papa is thrilled with his relationship with partner Mary-Lynn and his family members, his good health, and his ability to play music for the public

On a local level, music fans can often see Papa Thom play at the Waterfront Grill in Peachland. He also loves to perform a lot of private house concerts and fundraising events.

“I am looking forward to playing a few songs at the Night of the Arts. It is precisely the sort of event that I love to be involved with. Helping others and inspiring folks is what being an entertainer is all about. I can’t wait.”

It’s difficult to know who will be happier with the experience – Keith or the crowd.

Admission is by donation with all proceeds going towards Metro Community, a local organization that offers assistance to those at risk within our community. Metro Central – a coffee shop, library, counselling facility in the downtown area, is one example of Metro’s help.