Home David Suzuki No fungi? No forests, no food, no future! 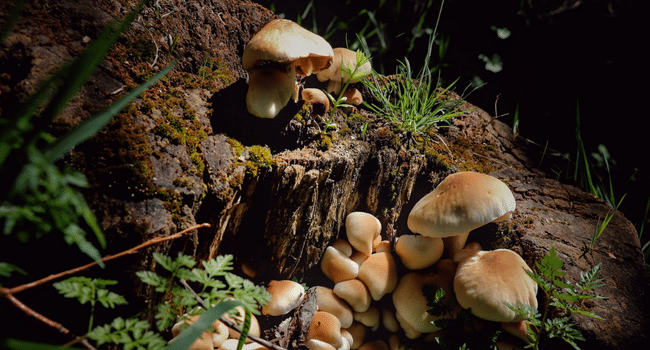 No fungi? No forests, no food, no future!

If you’re celebrating the festive season with cheese, bread and a glass of wine, beer or kombucha followed by chocolate, it might be a good time to think about fungi. It’s what makes all those tasty items possible!

In fact, almost all food production relies on fungi. Most plants need it to obtain nutrients and water. Trees and other plants in a forest connect through intricate fungal, or mycorrhizal, networks of tiny mycelium threads that transfer nutrients, water and information between them, and that facilitate decomposition, without which life couldn’t go on.

All fermented foods — including beer, wine, chocolate, cheese, bread, soy sauce and tofu — require yeasts, a single-celled fungus. Fungi have also been indispensable in preserving foods. And cows and other ruminants need gut fungi to break down grass.

“They are also to be thanked for many of the important medical breakthroughs in human history that treat both physical and mental ailments, for naturally sequestering and slowly releasing carbon, for optimizing industrial processes, and so much more,” a Guardian article reports.

Fungi fascination is spreading — from the popularity of gut-healthy fermented foods to fungi’s potential to help solve a range of environmental problems to research into mental health treatments using psychoactive mushrooms. But many people don’t go much deeper than momentary wonder at a brilliant red and white-spotted Amanita muscaria while walking in the forest, or repulsion at mould on bread.

For something so critical to all life, it’s surprising how much we have yet to learn about fungi and how much of our scientific knowledge is relatively recent — although many Indigenous Peoples have long known much of what Western scientists are now discovering about fungi and mycorrhizal networks and their roles in ecosystems.

Until 1969, Western botanists classified fungi as plants. Now we know they’re more closely related to animals but are in their own class. Unlike plants, which produce their own food through photosynthesis, fungi secrete enzymes that dissolve surrounding nutrients, which they then absorb.

We’ve gone from two to three Fs, for the most part, in classifying life: “fauna, flora and funga.” The latter includes yeasts, rusts, smuts, mildews, moulds and mushrooms. Scientists also recognize two other classes, monera (which includes bacteria) and protista (which includes protozoa, algae and slime moulds), and some divide those further.
Of an estimated 3.8 million types of fungi, only about 10 per cent have been identified and studied. What we’re learning is fascinating and critically important, and illustrates the interconnectedness of all life.

“They’re really weird organisms with the most bizarre life cycle. And yet when you understand their role in the Earth’s ecosystem, you realise that they underpin life on Earth,” said Kathy Willis, director of science at the Royal Botanic Gardens, Kew, which leads “State of the World’s Plants and Fungi” assessments.

Despite fungi’s many benefits, some can be dangerous or deadly to plants and humans and other animals. But understanding the crucial role they play in the web of life is critical if we’re to resolve the many environmental crises we face.

To start, they offer many solutions — from breaking down plastics to decontaminating industrial sites to sequestering atmospheric carbon. Even the use of psilocybin mushrooms in mental health treatment could help with societal resilience during increasingly anxious times. But fungi also connect and support so much of life.

Although knowledge about fungi and their importance is growing, “they represent a meagre 0.2 % of our global conservation priorities,” the organization Flora Fauna Funga reports. More than 1,300 scientists, researchers, activists and citizens from 77 countries have joined FFF’s call “for fungi to be recognised within legal conservation frameworks and protected on an equal footing with animals and plants.”

We often ignore what we can’t see. Yet there’s an astounding, intricate mycorrhizal web beneath our feet, holding soil together, distributing nutrients and water and enabling communication between plants. Fungi are part of everything we eat, provide us with medicines, offer environmental solutions and are key to the constant cycle of birth, death, decay and rebirth.

We must do all we can to protect wild spaces, agricultural soils and urban green spaces and the fungi that inhabit them. Mushrooms can live without us, but we can’t live without them. Ponder that over your festive meal!