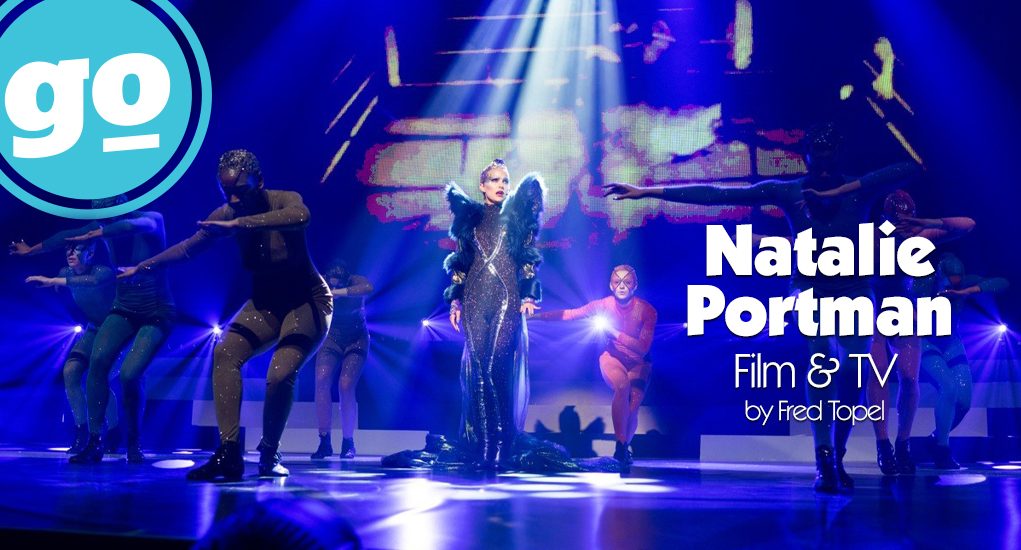 Natalie Portman can do anything a role requires. She shot guns as a child in The Professional, danced ballet for Black Swan and now sings pop songs and dances full choreography in Vox Lux. Portman plays Celeste, a singer who rose to fame when she wrote a memorial song after a school shooting as a child.

Cut to 2017 when terrorists commit another act of violence wearing an outfit from Celeste’s famous video. On the day of a concert performance, Celeste lashes out and breaks down, including some harrowing scenes with her daughter (Raffey Cassidy, who also played young Celeste). Portman spoke about her role in Vox Lux after an AFI Fest premiere screening in Los Angeles and Gonzo was there. Vox Lux opens Friday, December 7.

Question: Was this character a collaboration between you and the director?

Natalie Portman: Absolutely. I think the biggest part of the character was the writing. [Writer/director] Brady [Corbet] wrote such a specific character that felt so rounded and such like a real human being with very dark sides. Sometimes she’s really authentic and sometimes she’s totally fake and sometimes she’s cruel and sometimes she’s gentle and sometimes she’s performing and sometimes she’s being. It was really just remarkable reading it. I feel like that really provided a great blueprint, and then watching all the different documentaries that pop stars made. Almost all of them have made them now. Working on the choreography, going from having a baby to being able to do squats in stilettos. Then doing the recording. That was the preparation.

Question: Did you work with Raffey to build the character?

Natalie Portman: We actually didn’t. I think that was intentional for Brady because he really wanted them to be different characters because she’s really changed obviously. You see this innocent young woman at the beginning and then catch her after 20 years of hard life I guess. I loved the fact that he chose to skip that period because we all know how to fill it in. We know plenty of the hard times of a pop star, the rocky road until their resurrection. It’s such a familiar tale to us so you don’t have to see it.

Question: What drew you to this character?

Natalie Portman: I thought there was an incredible opportunity to play a character like that that I’ve never had a chance to play before and then also to work with someone like Brady who I think is incredibly talented and interesting and full of great ideas. And then also I think a lot of the themes are really relevant to the world we live in. I feel like a really accurate portrait of what it’s like to live in this moment in history which feels very, very specific that I hadn’t seen reflected in that way before.

Question: What was the preparation for the final dance scene?

Natalie Portman: Okay, well, that’s a lot. Physically, it was a lot of preparation. I worked with Raquel [Horsford]. I worked with my husband [Benjamin Millepied] on the choreography for about a month. I actually prepped the film twice because the night before I think I was actually on my way to the airport the first time and they were like, “Turn home, the financing fell apart.” We were literally about to shoot and the financing fell through and the movie was cancelled. I had prepped everything so when everything got pulled back together again it was a few months later, so I had to kind of start over again, even though it was relatively recent in my memory. I had to start over. So that was kind of nice because it actually gave a longer time to prep and a longer time to sit in my head and my body and all that. So physically, that was dance training, physical training just to have the endurance to do a show like that. Then emotionally, I kept asking Brady. She’s obviously had this massive breakdown right before. She’s obviously had this drug experience and he was like no. She’s out of it, down and back up and she’s a professional. She’s done this a million times and she can operate even a little bit messed up.

Question: Is she where she wants to be, at the peak of her game?

Natalie Portman: Yeah, I mean, maybe not the peak but can handle it to the point where her audience isn’t aware that she was having a drug fueled meltdown minutes earlier. So that was really informative in terms of the headspace of just being able to enter, that she could kind of enter a space and leave everything behind her that just happened, that she can go in anew which was an interesting kind of key to the character too. A certain kind of erasure must have to happen. And then logistically, we had a day and a half to shoot it. Brady shot this entire movie in 22 days. I shot in 10 days. They opened a studio right around the corner from my house where I grew up and like right around the corner from my school where I grew up so it was legitimately like a homecoming kind of feeling. And we stayed at this hotel that, I forget what it’s called, but it’s something fantasy sounding like The Babylon Inn or something. It was like where I went to every Bar Mitzvah growing up. The guy at the door was like, “I remember you from when you were in your Bar Mitzvah dress.” I was like, “Oh God.” It was a real return to my roots kind of feeling. Very easy to go into my accent because it’s where I grew up.

Natalie Portman: And the first day shooting was the drug meltdown. It was like, “And go.”

Question: Since he was an actor, did Brady bring something else to directing?

Natalie Portman: He’s really understanding of actors because of that. I think he really understands the freedom that you want and need and he created a situation, first of all, where you feel very safe and taken care of, that you have someone considerate looking out for you, which already creates a safe environment. But then on top of it, these long takes, we were able to do these scenes that are written quite lengthily. That diner scene was I think a 10 or 12 page scene. We could do that in its entirety. When you can do it in its entirety, you really are able to first modulate throughout the scene where you’re going, what turns you take. And you also are able to keep track of doing completely different things and letting starting points that are different go different places, end different places so it’s a real gift because doing a fragment of a scene is hard. It’s a whole different scale. So it was really, really incredible. So that diner scene, for example, he had two cameras so that we could do the scene in its entirety and if we were spontaneous with each other, you could get the reaction too so you didn’t have to repeat interesting moments that happened or something. You could just let them exist. So it was really fun. Despite having such a short amount of time, I felt like I could do 12 completely different takes for every scene because we were shooting that way. I hadn’t had that freedom on anything.

Question: How did you feel getting to sing and perform Sia music?

Natalie Portman: Well, it was incredible when I received the script to have the Sia song with it. I remember getting an e-mail with these attachments of the songs, and she sings them on the demos herself. So of course they’re gorgeous. Just beautiful, beautiful songs and really great pop songs so I knew that it was realistic, because if you read a script and then it says, “And then she writes a hit pop song” and we don’t see the song, you’re like okay, good luck getting that. It was clear from the beginning that it had this incredible music. And getting to record it was really fun because I got to work with Chris Braide who’s incredible and the loveliest person. And just see what they can do. They’re the real artists. You see they can do so much magic to make things sound like what we’re used to hearing.