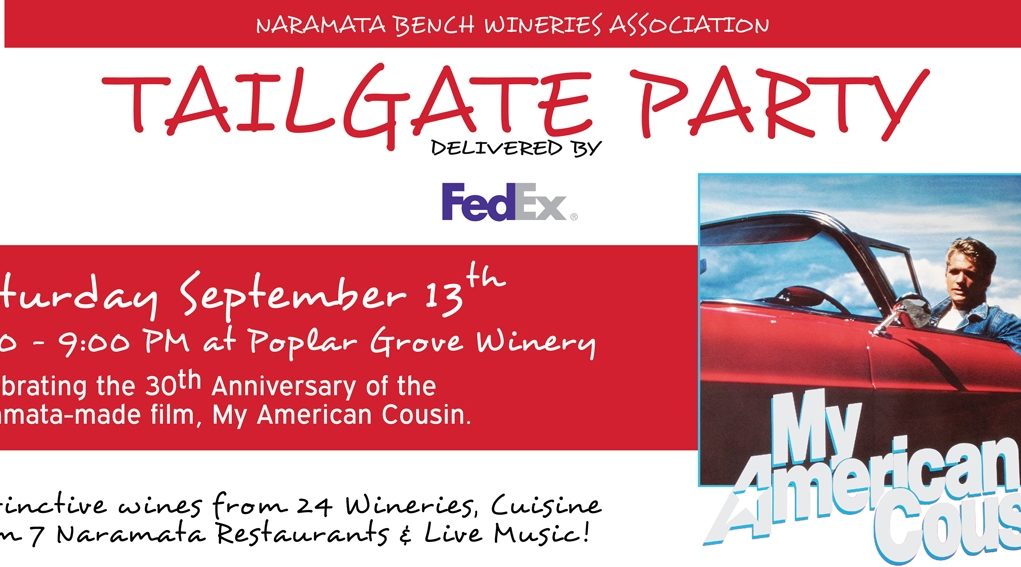 If you didn’t get tickets – it’s too late – unless you know someone who has an extra one. I would call them now if I were you! The Naramata Bench Winery Association Tailgate Party on September 13 is going to be THE event of the fall season.

The Chefs are very excited to be creating pairings for all the lucky guests from proteins that were available in the Okanagan in 1959, the year that the film “My American Cousin” was set in.

Seven talented Chefs from Naramata Bench restaurants will be creating a fabulous menu of gourmet offerings featuring a wide selection of Ocean Wise™ fish being supplied by Codfathers Seafood Market, and ranch and game meats being supplied by North Okanagan Game Meats.

The fish, which was all available in the streams, rivers and lakes in the Okanagan in1959 includes Steelhead Trout, Sockeye Salmon and Artic Char. Chef Robert Codonier from Hillside Bistro, Bruno Terroso from the Vanilla Pod at Poplar Grove Winery, Mark Ashton from The Patio at Lake Breeze Vineyards, and AK Campbell from the Naramata Heritage Inn will be creating the seafood pairings.

The ranch and game meats for the menu pairings were either hunted or ranched in 1959. They include wild boar, pork and lamb dishes prepared by chefs Darin Paterson from Red Rooster Winery’s Pecking Room Patio Grill, Abul Adame from The Kitchen at Misconduct Wine Co., and Stuart Glynes from The Bench Artisan Market.

The Tailgate Party this year is a celebration of the making of the Naramata film “My American Cousin,” which was shot in September 1984 by Writer/Director Sandy Wilson, who was born and raised in Naramata. Sandy and some of the original cast and crew will be at the party as we revisit the summer of 1959 in Naramata, the setting for the film.

The 24 member wineries of the Naramata Bench Wineries Association are circling their trucks on September 13 for their wine party of the season. The event will take place at Poplar Grove Winery on the Naramata Bench from 6:30 to 9 PM.

Attendees will enjoy wines from 24 renowned wineries, food from Naramata Bench restaurants, and live 50’s music. And for those who dare to wear a 1950’s outfit as there will be prizes for the best and most authentic ones. I hope to see you there!