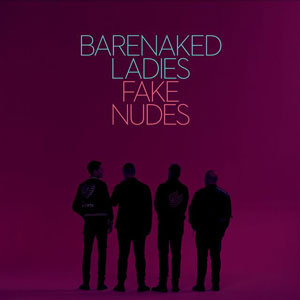 Hard to believe, but this is BNL’s 15th studio album.  Fake Nudes is a good balance of the elements evident in the band’s 29 year career- solid musicianship, some serious lyrical ideas and some of that whimsy we’ve come to expect.

“I’m incredibly proud of this collection of songs” says front man Ed Robertson. “This is a record where all band members shine.  It’s incredible to feel this excited about something 29 years into our career.  I’m excited to get out and play these songs live.” It’s cool to hear some of the other guys- Jim Creegan (bass), Kevin Hearn (keys, guitar), Tyler Stewart (drums)- take turns on lead vocals, it gives them more colors to paint with.

From the modern pop of Lookin’ Up and Bringing It Home (the first single) to the acoustic balladry that is typical of BNL records, Fake Nudes is perhaps the most balanced vision of who the band was and who they would like to be.  They were quite jokey (and enjoyable) when they first came out, but it didn’t take long for the public to ask “what else you got?”  Robertson, Creegan, Hearn and Stewart write and play with the togetherness you’d expect from a band that’s been at it for nearly three decades, and songs like the opener Canada Dry give songs like Dusty Rooms even more depth.

I’ve got 11 of their albums, even heard the fabled Yellow Album cassette e.p they used to sell at gigs before they got signed, so I’ve had my eye on Barenaked Ladies for some time.  Fake Nudes isn’t their best record- Gordon and Stunt are the ones to beat- but ranging between Warren Zevon-like playfulness and Simon & Garfunkel seriousness makes this a complex and ultimately rewarding disc.  That, and excellent production once again from Gavin Brown means Fake Nudes is a winner. 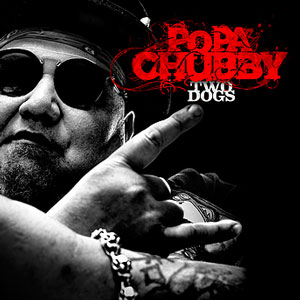 A new record from Brooklyn guitarist Popa Chubby (real name, Ted Horowitz) is cause for celebration.  I’ve been into his stuff since first hearing How’d A White Boy Get The Blues in 2000, and Two Dogs is the Popa we know and love, with a few things we’ve never heard before.  Dogs stands with his best stuff.

In the liner notes Popa talks about the title track, saying “We have become polarized as a race. There is a battle inside each of us.  Each day we rise and must choose our path, calling upon each other and our own spirits for strength and courage.  The dog we feed is the one that rules, the dog we starve dies of neglect.  It is up to each of us to use our spirit to feed the dog that will enable all of us to thrive.”  Particularly in the U.S., in terms of the Republicans’ divisive political agenda, we must be vigilant.

Calling Popa Chubby a blues artist is lazy.  Yes he plays the blues but there are elements of rock, funk, soul and even flashes of country in his writing and playing.  Popa describes his performance style as “The Stooges meet Buddy Guy, Motorhead meets Muddy Waters and Jimi Hendrix meets Robert Johnson”.  In 2006 he released Electric Chubbyland, a 3 disc set (2 of ‘em live) of Hendrix covers.  It takes balls to pull a move like that, and he has them.  Two Dogs rocks, rolls, and absolutely kills. 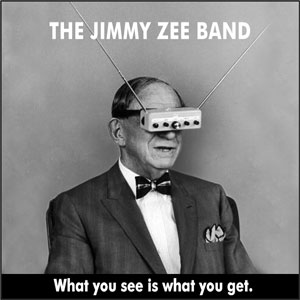 Jimmy Zee knocks it out of the park with his new album. His rough, Tom Wait-esque vocals (also compared to Joe Cocker and Robbie Robertson’s latter day stuff) are the perfect delivery for the 10 rockin’ blues tunes on What You See Is What You Get.

The success of Jimmy Zee’s Devil Take Me Down album was assured by a remake of Sweeney Todd’s Roxy Roller, which The Toronto Star calls “one of the top ten remakes of all time”.  His follow-up disc, Ride includes a re-working of the Rush’s Working Man- enjoyable but less effective.  Perhaps being aware that such songs might be perceived as a gimmick, Jimmy stuffs What You See Is What You Get with originals.

As much as I dig Zee’s first two discs, What You See feels like a step up performance and song-wise, like he’s settled into a gratifying groove.  Produced by Mark Henning and Jimmy Zee, this bad boy features some of Canada’s best players including Harpdog Brown, Steve Hilliam, Rob McDonald and Tim Porter.  The liner notes also include a line or two on what each song is about, which brings the music even closer.

There’s an attitude on What You See Is What You Get that I can’t quantify, other than to say it’s some kind of laid back casualness (or self assurance) that makes these tracks feel effortless, and that’s pretty rare.  His soulful brand of blues takes you in right away, and frankly I’m a sucker for acoustic slide so this disc really has my number.  Granted, Jimmy Zee is not exactly a household name- but if What You See Is What You Get gets the right breaks, that should change.

KEY CUTS:  Backroads (with a rap from Rick Threat), My Old Lady Is A Freak Show, Money 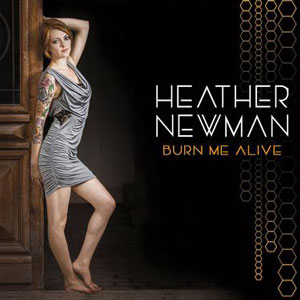 After hearing Heather sing on last year’s Live At Knuckleheads Vol. 1 by the Nick Schnebelen Band, it’s a delight to hear her on her own.  A powerful and sensual vocalist, the blues are Heather Newman’s playthings and Burn Me Alive crackles with possibility.

Heather sings and plays bass beside Keith Ladd on guitar, Ryan Flemmer on keyboards and Cole Dillingham on drums.  While I’m not in love with the snare drum sound (not the “thwack!” I prefer), the mix is robust and well rounded, and guest appearances by her old boss Nick Schnebelen (guitar on High Mountain Blues) and Michael Lefever (sax on Dirty Blues) are worth noting.  As for the vibe of the record, it varies from dance floor filling jams to lowdown blues, to something slinky and swingin’ like How Many Times?

Newman and Dillingham make a supple rhythm section, and Ladd’s guitar is quite spicy.  His leads are exciting and well fitted to the tunes without being too ‘wanky’, and his rhythm work alongside keyboard player Ryan Flemmer is tight, and understated when Flemmer takes a nice, bluesy solo for himself.  As for Heather Newman’s voice, this chick is the real deal.  Whether she’s conveying the emotional damage described in I Don’t Know Why or having a blast on Bring The Swing, you get the sense that she means what she’s singing; and that’s kind of the music that hits you hardest and sticks the longest. Feeling that truth is a genuine thrill.

Burn Me Alive is a steamy blues adventure that should absolutely not be missed. 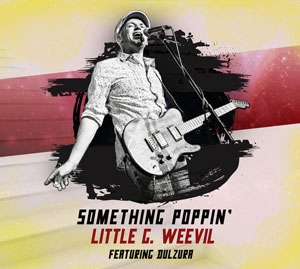 A new album from an intriguing artist that calls Atlanta, Georgia and Budapest, Hungary home.  Something Poppin’ is 21st century blues, a combination of rootsy and modern sounds for a somewhat unusual yet pleasurable experience.

Though a white guy from Hungary, Little G effectively explores 70’s Afro-American blues, soul, R&B, funk and rock with the sounds of blacksploitation movies like Superfl-, he does a wicked cover of the flick’s hit track Pusherman.  “This is definitely the most creative work of my career and I’m enjoying every minute of it” Weevil says.  “I love it because it carries the honesty of the blues but gives it a more modern jacket.  To me this is not blues/rock- this is 21st century rhythm & blues.”

There’s a funk ‘n’ soul smoothness to these 10 tracks that just feels really cool.  And maybe it’s coming from a different culture, at least initially, that gives Weevil an outsider’s perspective on this proudly American music.  He says this isn’t ‘blues rock’- heck, I wouldn’t call these ‘blues’ songs in the strictest sense- but rock it certainly does, with a hefty backbeat by drummer Daniel Harper.  The Skynyrd-esque guitar duel at the end of Crawling is a rousing climax, and I found myself wishing it had been longer.

Little G. has a great singing voice for the blues, not unlike David Clayton Thomas, and that goes for the funk and soul he’s introduced into his sound here too.  I dig the songs themselves, and the sonic heft of the production gives the stereo speakers a sweaty workout.  Something Poppin’ is very nice work.

KEY CUTS:  Crawling, Pusherman, See Me In The Country 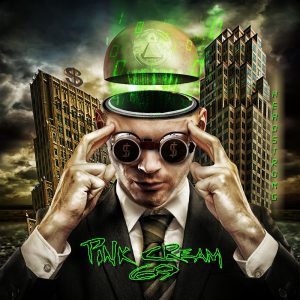 This is the 12th studio album from these German hard rockers and it’s one of the best things I’ve heard all year.  PC-69 celebrates their 30th anniversary with a killer new album that also includes a live disc featuring songs from across their catalogue.  Under the word “awesome” in the dictionary there should be a picture of the Headstrong cover.

For those that don’t know this band (and I’m betting most on this side of the pond don’t) Pink Cream 69 was started in 1987 by singer Andi Deris, drummer Kosta Zafiriou, guitarist/bassist Dennis Ward.  Though some of the players have changed over the years, one thing hasn’t; their hard charging rock & roll attack. The press release I received with this download likens their music to Pretty Maids, Unisonic, Harem Scarem, Helloween, Jaded Heart and Place Vendome, but those are mostly European groups I’m not familiar with.  Over here they’re more like Lynch Mob or King’s X combined with Godsmack.

Headstrong is just one of those records that energizes you, making bands like Motley Crue seem like Nancy boys.  It’s hard, heavy, relentless classic metal, latter day Judas Priest meets AC/DC, and it’s great to listen to.  I first encountered them with 2007’s In10sity and it was love at first spin.  A quick check of I-Tunes reveals that only 6 of their albums (including Headstrong) are available there, so if you want to hear the rest of the PC-69 catalogue you have some digging to do.

When it comes to German rock & roll we usually think of Scorpions, Accept and Rammstein.  One listen to Headstrong and you’ll know Pink Cream 69 belongs on that list too- this disc is a ferocious, relentless, pounding, melodic masterpiece.

DISC TWO:  Talk To The Moon, Welcome The Night