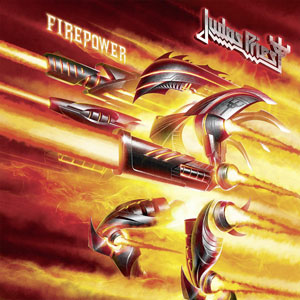 Rob Halford has been known to shout from the stage “The Priest is back!!!”, and they are.  In Firepower, Judas Priest has just made THE album of their career.

Firepower is the record I’ve been waiting for since Rob Halford re-joined Judas Priest in 2003.  Their ‘comeback’ album after the Ripper years, Angel Of Retribution, was curiously weak, followed by the bizarre concept record Nostradamus, a move directly out of the Kiss playbook; in the 80’s Kiss issued a weak pop album (Unmasked) then followed with a bizarre concept record (Music From The Elder).  Priest found their feet again with 2014’s brutally powerful Redeemer Of Souls, and Firepower combines that strength with the band’s mid-period… well, firepower, for an exciting disc.

The combination of 2 great metal producers here stacks the deck.  Tom Allom, producer of their classic run from Unleashed In The East to Ram It Down, was in the control room along with Andy Sneap (Accept’s comeback albums, Saxon’s Battering Ram) and between them and engineer Mike Exeter, they pulled a masterful performance from Priest.  “Tom Allom has got this classic metal thing” explains Halford, “and Andy is a bit more of a ‘modern metal’ producer, but his thinking is a little bit different to Tom’s. And I think to get this balance between that classic old school metal to what Andy’s world is was just a remarkable coincidence.” Drummer Scott Travis notes that the group returned to an early way of working that gave the incredible results. “We went back to the organic way of recording where it’s all of us in a room” he says, “and we got to play together.”

Firepower, their 18th studio album, is a combination of Painkiller, Defenders Of The Faith and Redeemer Of Souls- a successful amalgam of classic and modern metal muscle, all killer with no filler.  Great riffs, great soloing from Glenn and Richie and, frankly, singer Rob Halford hasn’t sounded this engaged with the material in forever. Spectacular! 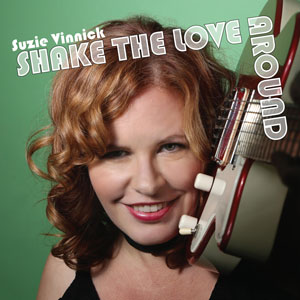 This is Vinnick’s 6th album, following a couple of solo acoustic efforts, and it’s the best thing she’s done.  Suzie performs these songs with a warmth and generosity that would make them at home on your front porch or on stage.

When I interviewed Suzie in 2012 (I think it was) she took exception to being referred to as a blues artist, preferring to be described as a roots musician.  In listening to Shake The Love Around, she was right… and I think I was too.  Aside from being a captivating instrumentalist, her voice is supple and expressive. “Singing is like sleeping and breathing for me” she says. “If you can’t sing with feeling, you can’t move people.”

Even the album title has a warm, intimate feel to it. Originally hailing from Saskatoon, Vinnick says the title was inspired by friends in Forget, SK, who used to hold hands and “shake the love around” after grace at every meal.  The camaraderie of those days has never left her, and it’s no accident that it’s the perfect title for this collection of songs.  Find Some Freedom is a joyful look at the things that make life worthwhile… there’s the quiet beauty of Drift Away (co-written with the amazing Matt Andersen), and Suzie’s sultry cover of John Fogerty’s A Hundred And Ten In The Shade is unforgettable.

Aside from that incredible voice Vinnick plays bass, lap steel, electric and acoustic guitars, and the National Folkstar guitar on the new record.  The bed tracks were recorded with drummer Gary Craig (Blackie & The Rodeo Kings, Jann Arden, Tom Cochrane), plus Colin Linden and Kevin Breit lent their guitar playing talents to a couple of songs too.

Shake The Love Around is one of those records that makes you feel better for having listened to it.  “A lot of me is in this album and it feels really good” Suzie observes.  “We shook the love around and made it happen.”  As she says in the liner notes, “Though there seems to be a lot of darkness in the world these days, this album has a lot of happy and positive songs- my hope is that it’ll get you shaking your love around!”  Mission accomplished, Suze.

KEY CUTS:  A Hundred and Ten In The Shade, Happy As Hell, Drift Away 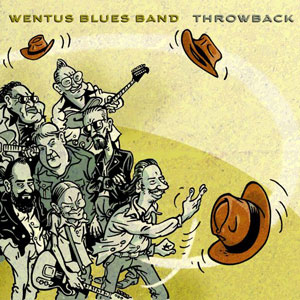 When you go looking for the blues chances are you’ll head straight for Mississippi, Louisiana or Chicago.  I’ll bet Finland doesn’t even make the top 10 list, which is too bad… that’s where the Wentus Blues Band is from, and they play world class blues.

Wentus Blues Band has been around since 1986 and plays around 150 gigs a year, honing their craft to become just about the hardest working blues band in all of Europe, and Throwback is a bunch of songs the band has enjoyed playing over the years. With this album the band wanted to honour some of their heroes, ranging from Canned Heat to Eddie Kirkland to Louisiana Red, playing their favourite songs written by those cool cats.  On the inner sleeve, each track notes whose pen it came from.  “We hope you enjoy the results as much as we did when recording and playing them” the band says.

Feeling and performance aside, Throwback is spectacularly well recorded.  The drums are captured perfectly and the presence of the other instruments is incredible.  According to the liner notes, this was “recorded downstairs from our rehearsal place in the meeting room of the Linnuspera Marthas in the old school building Villa Skola located in Ventus, Kokkola, Finland.”  No sterile recording studio for these guys, and it shows in the loose yet tight playing; just 5 guys strapping up and blasting away on some juicy blues.

For my money, spirit and soul are equally important in playing the blues as is chops, and Wentus Blues has it all going on.  Cool songs played with feeling- that’s what you want from a blues record, and that’s what Wentus Band gives us with Throwback.  I have to agree with Elmore Magazine’s assessment of this group; “Wentus is popular in much of mainland Europe, but they are certainly worthy of a far wider blues audience.”  Play Throwback just once, and you’ll agree. 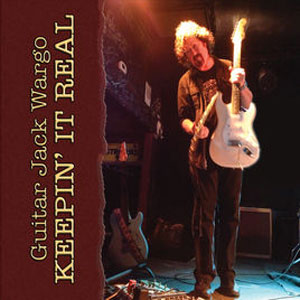 When your first name is ‘guitar’, you’d better be bringing your ‘A’ game.  Praised as “silky smooth and Clapton-esque” he blends rhythm, soul effortlessly with the blues.  The album title?  As Wargo says, “The power of the blues is all about keeping it real.”

You may not be immediately familiar with Guitar Jack, but he’s kept some heavy company. He’s toured with Screamin’ Jay Hawkins, Hank Ballard & The Midnighters, Billy Preston and Solomon Burke.  He has also recorded with Ray Charles and The Jacksons and his band, “Guitar Jack & No Slack” was the house band at BB King’s Blues Club.  He even played with John Fogerty on a couple of HBO specials.  With a resume like that, it’s safe to assume the dude can play.

Keepin’ It Real features 11 new songs and a cover of Woody Guthrie’s Goin’ Down The Road Feeling Bad.  Like so many other blues players, Wargo’s axe of choice is the Stratocaster, and he wields it with feeling and precision.  He’s surrounded himself with some intriguing special guests, playing the blues with a chewy undercurrent of funk.  Jack shares vocals with AD Beal, and Willie Chambers of The Chambers Brothers and The Sweet Inspirations helps out at the mic too.  Mike Finnegan also rocks the Hammond B-3, and Walfredo Reyes, Jr. lends a hand on percussion.

I went into Keepin’ It Real expecting a full on blues album given the name, but that’s underestimating the magic in play here, an unnecessary limitation.  The blues are the foundation of this disc for sure, but you’ll hear and feel the soul, the R&B and the funk too.  Produced by Jack himself, recorded and engineered by George Landress, Keepin’ It Real is spacious and marvellous, sounding great at any volume.  It’s only a matter of time before the rest of the world gets hip to Guitar Jack Wargo.

KEY CUTS:  No Stranger, Power Of Love, Goin’ Down The Road Feeling Bad 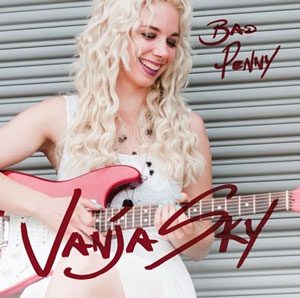 Here is Ruf Records’ newest discovery, joining their already impressive roster of female blues artists like Samantha Fish and Joanne Shaw Taylor.  Hailing from the Croatian capital of Zagreb, this singer/ guitarist is part of the next wave of hungry, up-and-coming musicians from all corners of the globe bringing their passion and energy to the blues.

Citing Rory Gallagher, Stevie Ray and Albert King as key influences, Sky has only been playing guitar for 5 years, picking it up after seeing a live show in her hometown of Buzet.  “There was a special energy in the air” she says. “I decided I wanted to play guitar right then and there- and when I decide something, I just have to do it.”  So, she ordered a cheap guitar on the internet, began taking lessons from the guitar player whose performance had inspired her, and eventually quit her job as a pastry chef to dedicate herself to music.

Bad Penny (named after a Rory Gallagher tune) was recorded at Bessie Blues Studios in Stantonville, Tennessee, the home base of Grammy-winning producer Jim Gaines.  Amongst the 12 songs recorded for her debut album is a ripping version of Luther Allison’s Low Down And Dirty that includes some fierce playing from label mates Mike Zito and Bernard Allison… not a bad way to start!

Sky’s vocal style has also been described as not unlike The Runaways, and she definitely likes to rock. “Vanja is a passionate songwriter who writes from her feelings. But she also enjoys having fun and cutting loose” says Mike Zito, who oversaw the remainder of the production in Berlin. “She has a very strong voice and her love for blues guitar will be her strong suit.”

Bad Penny is a promising start to a career in the blues. “Music is the most wonderful gift on the planet” Vanja says. “It’s my aim to bring happiness through music to as many people as possible.”  I’d say she’s definitely on her way. 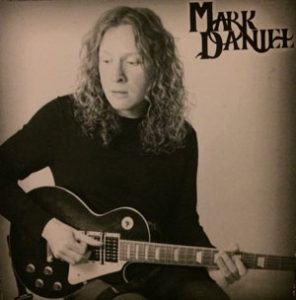 Some pretty excellent guitar based rock & roll here if you want to partake!  New Truth is the E.P. that came out in advance of the full album last month, and I like it a whole lot better than I expected to- always a cool surprise.

There’s an intriguing description of Mark in the bio I received with the CD; “His sound is what you’d expect if Jon Spencer and Led Zeppelin had a baby that went to high school with Neil Young and Stone Temple Pilots”, and in spinning these 5 songs you can definitely hear that.  This talented guitarist from Connecticut has supported other artists like Steve Vai, Everclear, Marshall Tucker, Living Colour and others, so he has the talent to run with the big dogs.

If New Truth has a weakness, it’s the vocals. Mark is a perfectly serviceable singer, but material this crunchy (for the most part) calls for a meatier voice, someone huskier or more gruff- you know, like Mickey Curry’s old boss Bryan Adams.  Summer is coming and, all things considered, this is gonna sound pretty cool blasting on the car stereo.