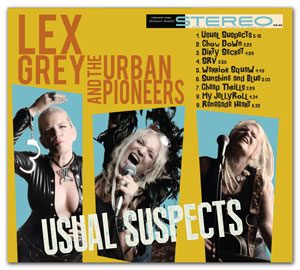 This is the 7th time out for these New York rockin’ blues adventure seekers.  Lex Grey claims Ma Rainey as her greatest inspiration and her vocal attack has been compared to Janis Joplin, Joe Cocker, Ella Fitzgerald, Shirley Bassey and Robert Plant, so there’s definitely something interesting happening here. The back of the CD cover promises “A world of stories cloaked in smoke and stage lights. A sound that dances you fearlessly through genres yet remains deeply rooted in the blues.”  Better hang on.

Usual Suspects has the energy of a live show, so we gotta wonder if this is one of those ‘live off the floor’ jobs.  It’s a little jagged around the edges so it took a couple of spins to get comfortable with it, but that’s not necessarily a problem.  The immediate attraction, to my ears at least, is Lex Grey’s singing.  She holds nothing back, even on a more laid back song like Warrior Squaw; every time she steps up to the mic, she KILLS.

As for her band The Urban Pioneers, they have the hell-bent-for-leather attitude needed to follow Lex into battle.  Usual Suspects is a disc of different textures, from the barn-burning title track that opens the record to the light swinging jazz of Sunshine And Blue.  The bio I received with this album says these guys are known for “a dazzlingly theatrical show”, and a run or two through these tracks will leave little doubt in your mind that this is the case.

Usual Suspects will hit you from several different directions, often at once; rock, blues, and even country.  There is nothing that they’re afraid to try, and I like that- a lot. 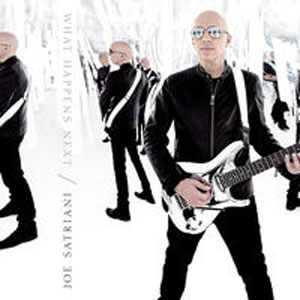 I make this to be Satch’s 16th solo studio album of instrumental rock & roll, the follow-up to 2015’s awesome Shockwave Supernova.  You can be forgiven for thinking it’s just more of the same, but listen closer; the difference between What Happens Next is fundamental- it’s in the depth of the grooves.

Produced by Mike Fraser (AC/DC) as has most of what he’s done since ’98, Next is a power trio adventure that includes Glenn Hughes (Deep Purple, Black Sabbath, Black Country Communion) on bass and Satriani’s occasional Chickenfoot band mate, drummer Chad Smith (Red Hot Chili Peppers) on drums.  Glenn and Chad are good friends and have worked together before, making them a tight rhythm section over which Joe can soar cut after glorious cut.  As much as I enjoy his previous records (and I’ve been listening since Surfing With The Alien) his performance here seems more joyous and free than it has been in some time.

The freshness you’ll notice in What Happens Next is the result of Satriani’s collaboration with Hughes and Smith.  More than just hired guns you can feel a deep connection between the three of them, whether they’re charging down the hill on Headrush or exploring a more laid back vibe on the title track. Satch’s playing feels more emotive on this album, sparking off what Glenn and Chad are giving him to work with.

What Happens Next is cool disc by anyone’s standards, and I’d sure love to hear these three guys work together again.  In the meantime, Joe is a busy boy- as this disc hits the streets he’s starting another one of his G3 tours, this time with Dream Theatre’s John Petrucci and Def Leppard’s Phil Collen.  “I think part of its charm is and its mojo is in the chemistry of having three top guitarists share what they do onstage” Joe says. “It’s fun, it’s unpredictable, it’s wild- it’s everything you could want in a show.” His filmmaker son ZZ has debuted a documentary on the Shockwave Supernova tour, and “Satriani’s Strange Beautiful Music: A Musical Memoir”  from 2014 has just been released in paperback.  That’s a lot of Satch, and I say bring it on. 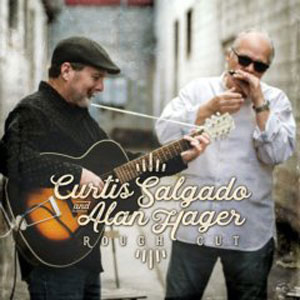 A superb new record from Portland’s finest.  Guitarist Alan Hager has been jamming with Salgado since 2003, joining his band full time in 2015. This is the first time they’ve stepped out of the band environment and, judging by Rough Cut, it’s something they should consider doing more often.

Rough Cut is a gorgeously stripped down album featuring a potent mix of newly written, timeless originals and carefully chosen blues covers. “We did it for the love of the music” Salgado says. “This is where our hearts are.  These are deep songs that we love to play.” From front to back, that love shines through.  Produced by Salgado and Hager, these songs range from plaintive to playful.  The ominous I Will Not Surrender, inspired partly by Curtis’s multiple battles with cancer is a deep, slow acoustic blues that opens up the disc, and I Want My Dog To Live Longer has long been a fan favorite, a good natured counterpoint to the emotionally heavier stuff.

With Curtis Salgado’s inspired singing and harp playing alongside Alan Hager’s spellbinding guitar playing, Rough Cut is like a deep, fresh breath of air- something they have a lot of in Portland Oregon, where the lads hail from.  This is a soulful, sparse, haunting blues lover’s dream come true.  It’s a joyful, emotionally uplifting exploration of the blues that I cannot recommend highly enough.

KEY CUTS:  I Will Not Surrender, I Want My Dog To Live Longer, You Got To Move 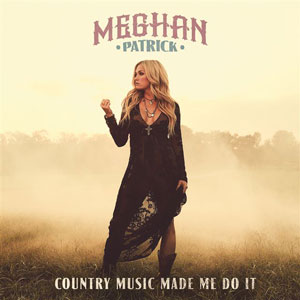 COUNTRY MADE ME DO IT Meghan Patrick (Warner Music Canada) ***

This is the second time out for Meghan Patrick, a follow-up to 2016’s Grace And Grit- a record I initially misjudged as she went on to win Female Artist Of The Year at the Canadian Country Music Awards. G&G yielded no less than 4 top 20 singles, and with Country Made Me Do It she looks set to climb even higher.

Produced by Jeremy Stover and mixed by Chris Lord-Alge, who has won record of the year for his work with everyone from Alison Krauss to U2 this is a terrific sounding album, sort of like Shania Twain’s 90’s stuff was.  Of working with Stover as producer, Meghan says “When we started the project we wrote together, coming up with several songs for the album. Jeremy and I clicked well and we had great chemistry in terms of writing.  We eventually got a large chunk of the songs together along with some of the other writers in his publishing company.  When he said he’d love to produce the album I said ‘well yeah, I thought you’d never ask’.”

What really makes Country Made Me Do It work is how Patrick manages to combine more traditional country values lyrically with the sonic punch of modern production.  Unlike a lot of the paint-by-numbers songs heard on country radio today, this is more than your average “let’s get drunk, fight and drive trucks” songs, ‘pretend’ country that really wants to be rock & roll. “I love traditional country music” she says, and I’m with her on that. “My goal has been to bring a little more of that traditional sound into the mainstream country market.  A lot of what’s out there right now is more on the pop side of country and there’s nothing wrong with that, but it’s just not what I want to do.”

In a crowded marketplace it can be hard to separate the wheat from the chaff, but with Country Made Me Do It Meghan Patrick is getting it right. 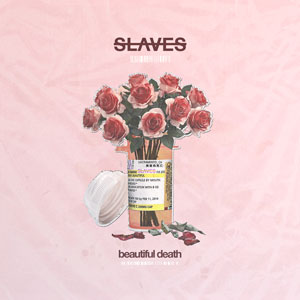 PATIENCE IS THE VIRTUE Slaves (SBG) ****

A single released by Slaves ahead of their Beautiful Death album due February 16th.  This just showed up in my email last week- I opened it on a whim, gave it a listen and was immediately taken in.  Haven’t been able to learn much about Slaves, other than they appear to be a pop/rock outfit from the U.K.  Patience is a dense, driving track… definitely a modern production piece as nothing sounds ‘natural’ about it, but it’s catchy as hell.  The combination of soaring pop vocals on the choruses with rap verses is quite effective, and I even like the message of the lyrics.  If the label sends me the full album I’ll tell you all about it in a future column.