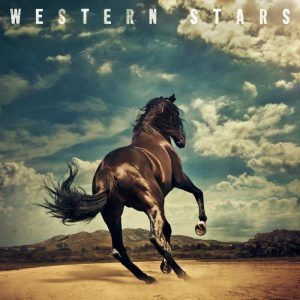 WESTERN STARS Bruce Springsteen (Columbia) *****
When I saw Springsteen On Broadway on Netflix in December then bought the soundtrack (my #1 pick for 2018), I had to wonder how it would affect what Bruce does nex. Now I know, but you’ll have to wait until June 14th to hear Western Stars in its entirety. The answer? It’s as expansive, personal and intimate as we hoped it would be.

“This record is a return to my solo recordings, featuring character driven songs and sweeping, cinematic orchestral arrangements” Springsteen says. “It’s a jewel box of a record.” Indeed, it feels like a more refined and mature version of what 1987’s Tunnel Of Love and Devils & Dust (’05) were trying to be. To get an idea of where Western Stars comes from and to get ready for it, watch Springsteen On Broadway if you haven’t seen it- or watch it again if you already have. It finds Bruce reflective as he shares acoustic versions of many of his hits, telling stories in between from his autobiography. Sure it’s a performance- everything he does is- but it’s an invitation to visit his world, with The Boss himself as tour guide… not a bad way to spend a couple of hours.

Western Stars finds Bruce exploring a sweeping range of American themes as he does so well; highways, desert spaces, themes of isolation and community and the permanence of home and hope. Ron Aniello produced the album (with Bruce), played bass, keyboards and other instruments, and Mrs. Springsteen (Patti Scialfa) contributes vocals and vocal arrangements on 4 tracks. More than 20 other players participated, including keyboardist Jon Brion who plays celeste, Moog and farfisa. The record was mixed by Tom Elmhirst. Western Stars feels like a blue collar cowboy record in a way. The lyrical imagery of the title track has haunting pedal steel weaving in and out of the background that really puts you on the ranch, and the orchestration on a song like Chasin’ Wild Horses makes you feel like you’re standing on the prairie and watching a movie at the same time.

Apart from the dominant western themes, Stars is influenced in part by the Southern California pop records of the late 60’s and early 70’s. This is the Bruce Springsteen we’ve been getting to know since Greetings From Asbury Park in 1973 and the guy we met in his autobiography and in Peter Ames Carlin’s Bruce, both terrific reads. There’s an emotional honesty to these songs that you’ll connect to- maybe not the circumstances he sings about, but the feelings they stir up. I know he’s just telling stories, but it feels like Bruce is laying his soul bare and inviting us to share. Maybe that’s why his popularity endures when other acts of his vintage have been reduced to greatest hits tours.

With Western Stars, Springsteen is still releasing vital records that people will listen to, dissect and discuss. We feel ourselves in a song like Stones or There Goes My Sunshine– this isn’t just Bruce Springsteen’s record, it’s ours too. Each of us is 4 different people; who we think we are, who others think we are, who we really are, and who we would like to be, and I think Bruce understands that extraordinarily well- at least it feels like it with Western Stars. Who needs therapy when you can listen to a record like this?