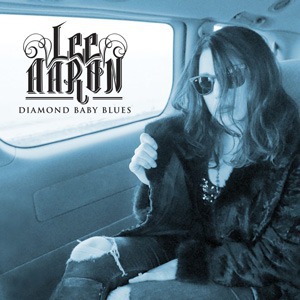 Diamond Baby Blues is the follow-up to Lee Aaron’s mighty return to rock, 2016’s Fire & Gasoline.  As good as that album is, this is even better.  The press release calls it “her best album in decades”, and they ain’t lyin’.

Long gone are the ‘warrior princess’ affectations of Lee’s early career, replaced by a self assuredness to drive this hard, feral rock & roll.  Diamond Baby Blues is the blues marinated within a hard rock framework.  Lee’s band (guitarist Sean Kelly, drummer John Cody, bassist Dave Reimer) deserves large praise for the grooves, the tough guitars and a good share of the oomph that DBB exudes.  Great playing here by all concerned, and vocally Ms. Aaron sounds a tad unhinged in spots, which I like a lot.  She’s singing with savage glee, flexing some vocal muscle, and it’s a beautiful thing to hear.

Lee is a good songwriter and hardly needs outside material, but the cover songs on DBB are rebuilt in her own image.  I’m A Woman, which I originally heard by Koko Taylor, is a feminist manifesto- I think Koko would’ve been pleased with how Lee pushes it even further.  Aaron also re-does Mistreated from Deep Purple’s Burn, David Coverdale’s first album with the Deeps.  Here the groove is different but no less powerful, and Lee’s vocal performance is stunning.  Then there’s the cover of Janet Jackson’s Black Cat, delivered with a smoldering power the original lacks.  And a re-do of Linda Ronstadt’s You’re No Good doubles the sass factor.

Simply put, Diamond Baby Blues is a great hard rock record that really sounds/feels good on the highway at punishing volumes- trust me!  If you like to rock hard, DBB will do it for you and then some- easily one of the best discs of 2018. 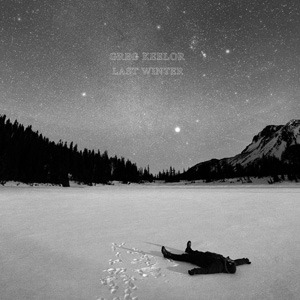 A breathtakingly beautiful set here from the Blue Rodeo co-founder.  Just 4 songs, each more than 8 minutes long, but they’ll leave you emotionally exhausted.  Inspired by everything from Gord Downie to the death of his biological mother, these are what Keelor calls “kind of quiet, meditative, yogic songs.”

Greg recorded Last Winter at his farm during the winter of 2016/2017, on the heels of Blue Rodeo’s 1000 Arms Canadian tour.  Faced with road exhaustion as well as the news of several friends’ precarious health situations, he did what he does best- processed it all into music.  “What I’ve done my whole life is to take these sorts of things and translate them into song because that is how I figure everything out” he says. “It’s how I place myself physically and emotionally in the world- it’s the way I sort information.”

This recorded was started by Gord’s Tune which, rightfully so, kicks things off.  “This record started with The Tragically Hip’s show at the Air Canada Centre in Toronto” Keelor states. “The song is my impression of that show and just how beautiful it was- how inspiring.  The way they did the whole show- starting out tight like a bar band and then expanding it up to the big stage at the end.  But the part of the show I found most inspiring was when they transformed the arena into fire and lightning.  That expressed more to me than any words, any song.  It was such a brave act.”

The other three songs are also uplifting and melancholy at the same time, including a surprising cover of the old blues standard Early In The Morning. Last Winter, as a record, is what Keelor calls “uplifting melancholy”.  Listening to this disc is an act of meditation, particularly Three Coffins, informed by a visit to his biological mother on her deathbed.  “There’ll be three coffins” she said. “’There’ll be one for you,” and she points at me.  “And there’s one for Martha (her sister) and one for me” meaning herself.  “And they’ll take us to the river and lay us gently in the stream, we’ll float out into the ocean, we’ll sink beneath the waves and there we will stay until we become fish and start again.” 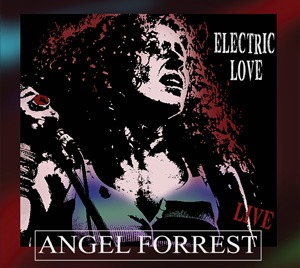 A potent live 2 disc set from this Quebec-based powerhouse blues singer of Joplinesque bluster and Tina Turner soul.  With an amazing band backing her up, Forrest delivers what, to my ears, is a perfect live blues album.

As Forrest says in the liner notes “The music has and continues to save me time and time again”, and I know how she feels.  Recorded live at Centre des Arts Juliette-Lassonde in St. Hyacinthe, Quebec last October, it sounds like this gig was a great night out.  It’s pretty rare to find a singer that can dig down into a song the way Angel can and come up with so many hair-on-your-arms-standing-up moments on one album.

Far from an overnight sensation, Angel Forrest’s career spans 30 years and ten albums.  She’s also been the recipient of the Maple Blues Awards for female Vocalist of The Year for the past 5 years.  She’s also performed at festivals around the world along side people like Shawn Phillips, Burton Cummings, Thornetta Davis and more.  Electric Love is loaded with rock and blues tunes that have a real physical and spiritual presence.  Amongst these 15 cuts you’ll find originals nestled comfortably next to some great classics you’ll be familiar with, including a couple of Janis Joplin tunes and The Animals’ House Of The Rising Sun, to name a few.

I’m as taken with the musicianship on Electric Love as I am with Angel’s voice, particularly guitarists Denis Coulombe and Ricky Paquette.  It’s an uncommon talent as a player to know when to hold back and when to let the dogs out when it’s time to rip a solo.  And they wouldn’t be able to do their jobs without the solid foundation set up by drummer Sly Coulombe and bassist Alec McElchran.  It’s all about the groove, baby, and these 5 musicians (Forrest included) have it in spades.

Electric Love is an incredible live album… now excuse me while I turn off the lights in my music room and pretend I was there while I listen again. 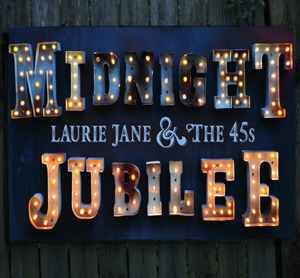 A joyful noise straight out of Louisville, Kentucky. A good-natured pastiche of country-soul, R&B and rockabilly with just the right amount of swagger, Midnight Jubilee is a delightful surprise.

Of Midnight Jubilee Rainey Wetnight of Blues Blast Magazine says “With a dash of Chicago swagger and more than a mite of Memphis moxie, it defies strict categorization within the blues genre.  Once in a while, aficionados need something new to chew on” and that certainly describes this disc.  When I first threw it on I thought “country” but knew almost instantly that label didn’t cover it.  Same goes for ‘blues’, ‘R&B’ or anything else you try to pin it down with… the only description that works is ‘music’.

Laurie Jane Duggins’ vocals are tempered with a sincerity and restraint you don’t hear in pop music these days, and the band’s casual grooviness is captivating as they wring out every last drop of heart and soul from each note.  Midnight Jubilee was produced by Steve “Catfish” Wilson, who obviously has a good feel for what The 45’s are all about.  He also got an extremely cool snare drum sound for drummer Scott Dugdale.

There’s a certain amount of ‘swing’ in these numbers, which is bound to happen when you play vintage instruments and have an upright bass (Jason Embry) in the band.  Guitarist Cort Duggins (who also plays some lap steel and piano) is a sweet player, comfortable in most any genre- whether he’s laying down greasy blues or rockin’ out.

Midnight Jubliee is one of those records that’s fun to be around, and I could listen to it all day long… in fact, I think I will.

KEY CUTS:  Got Me Where You Want Me, Midnight Jubilee, Couldn’t Cry Alone 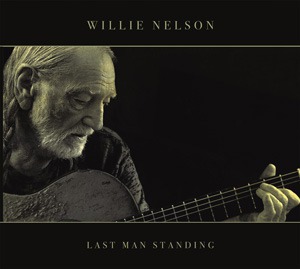 With his 11th album for Sony (and God knows how many overall!) Willie has released a batch of brilliant, captivating songs just in time for his 85th birthday.  Comprised entirely of new songs penned by Willie and his longtime producer/ creative partner Buddy Cannon Last Man Standing, a title seemingly acknowledging friends like Merle, Johnny, Waylon and Buck that have gone on before him, Willie’s new album is country gold.

Somewhat similar to Bernie Taupin and Elton John, Willie and Buddy have a unique approach to creating music, beginning with back and forth text messaging of with the melodies.  Of working with Nelson as a musician Cannon says “Willie’s a jazz singer and a jazz player.  He’s an improvisational musician, it’s different every time.  Get a good take and go with it.”  Well there were at least 11 good takes, because there are 11 really cool new songs on Last Man Standing.

Though I only own a few of Willie’s records (he’s done 86, if the discography on Wikipedia is to be trusted), I consider myself a fan.  I’ve read his biography and, like you, am familiar with many of the hits he’s had over the decade.  Who among us hasn’t started a trip compilation with On The Road Again more than once?  As much as I enjoy his music, I’m also a fan of Willie Nelson as a human being.  Talk about spirit- when he gets knocked down, which has happened a lot, he just gets back up, dusts himself off, and carries on… you can feel that in these songs.

Last Man Standing is mainly country music with old-fashioned (but not hokey) country soul and a side of jazziness.  There is truth in each song that we can all relate to, the musicianship is superb, and when Willie Nelson is singing about the hardships of life, you know he’s been there before us.  I’m not saying nice things about this disc because Willie is an old man and presumably near the end of his earthly journey; Last Man Standing is a genuinely excellent record that needs to be heard by everyone. 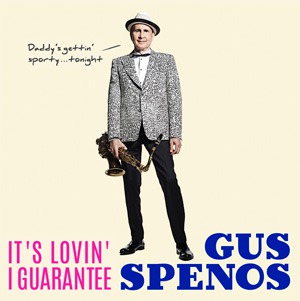 If I were to call any album from this year a ‘blast from the past’, this would be it. A refreshing set of big band-style jump, swing & boogie excursions, I suspect that It’s Love I Guarantee Gus’s second album, will have a somewhat narrow appeal… but those that love it will do so fiercely.

As a singer, Spenos is a bluesman with the shouting style of some of the greats.  He’s also a sax player with some serious chops when he’s not busy with his day job; a top neurologist in Indianapolis.  His band swings with panache- I won’t name the 14 other players here.  They have a real love and understanding of the music they’re playing. Pete Williams of Made In The Shade observes that “Spenos has somehow doctored the sound of big bands and jump blues to sound like a brand new art form.”  Whether that’s true or not should be debated by others more knowledgeable on the genre than I, but the joie de vivre throughout It’s Lovin’ I Guarantee is unmistakable.

As a drummer I haven’t played this kind of music since stage band in high school (over 40 years ago!), and the thing that strikes me here is that big band-type stuff is more fun to play than it is to listen to.  I’ll bet The Gus Spenos Orchestra is a blast to catch live, but just listening on CD there tends to be a sameness to the songs- at least that how it feels.  I suppose this type of finger-snappin’, toe-tappin’ jazz-inflected horn heavy R&B stuff is an acquired taste but like anything, if It’s Lovin’ I Guarantee speaks to you, by all means jump in with both feet.