LIVE NORTH AMERICA 2016 Gary Clark Jr. (Warner Bros.) ****+A new live album from Gary Clark Junior, his second in just 3 years.  Live North America is what great live records used to be- recorded absolutely live with no overdubs, what you hear is how it went down.  This is lightning in a bottle, full of guts and soul and inspired playing.LNA was recorded during the tour to support 2015’s The Story Of Sonny Boy Slim and includes several songs from the acclaimed record, including The Healing, Grinder, Our Love, Cold Blooded and Shake.  Gary has a wonderfully soulful voice, particularly on slower cuts like Church I Am, but what many of us came here for is his guitar playing and he does not disappoint.  Every time I listen to the lengthy guitar jams- and I’ve spun this 4 or 5 times now- I hear something different and fall a little bit deeper into the music, a good sign that this is a record with staying power.The release of Live North America 2016 coincides with Clark’s appearances as a special guest at Eric Clapton’s 50th anniversary shows at Madison Square Garden and The Forum in LA, which will have already taken place by the time you read this.  What does Clapton think of him?  “Gary Clark Jr. is incredibly inspiring to me because he does what I’d like to do on stage without any effort at all” notes Slowhand. If you’re not familiar yet with Gary Clark Jr., this new live album is a great place to start.

ESSENTIALS:  Our Love, Grinder, When My Train Pulls In, Church I Am

MIGRATION BLUES Eric Bibb (Stony Plain) *****One of today’s most respected and prolific bluesmen may have just outdone himself.  Migration Blues, Eric Bibb’s new album due out March 31st, is inspired both by history and the current refugee crisis we are witnessing today- and it’s spellbinding.Migration Blues is mainly composed of new tunes, but it also includes covers of Dylan’s Masters of War and Woody Guthrie’s This Land Is Your Land, with an arrangement of the traditional Morning Train closing out the 15 track album.  It’s a quietly emotional record with Bibb on vocals, guitars, six string banjo and contrabass, backed by Jerome Browne (guitars, vocals, banjos, mandolin and triangle!) and French harp maestro JJ Milteau, and was produced by them as well.Migration Blues is intense and dramatic, as stories under such a title surely must be. “Whether you’re looking at a former sharecropper, hitchhiking from Clarksdale to Chicago in 1923, or an orphan from Aleppo, in a boatful of refugees in 2016, it’s migration blues” notes Eric. “With this album, I want to encourage us all to keep our minds and hearts wide open to the ongoing plight of refugees everywhere.  As history shows, we all come from people who, at some time or another, had to move.”The musicianship is exquisite, subtle and nuanced, on par with Clapton’s Unplugged from 1992, and though the subject matter overall is pretty heavy Migration Blues is not a preachy record.  “While pondering the current refugee crisis I found myself thinking about The Great Migration, which saw millions of African Americans leaving the brutal segregation and economic misery of the rural south for the industrial cities of the North” Bibb says in the liner notes. “Making this connection is what inspired the new songs included here.”  Migration Blues is inspiring and revelatory- great stuff.

ESSENTIALS: Delta Getaway, We Had To Move, Masters of War, Mornin’ Train

FUNK’N’SPACE Chameleon Project (Last Tango/ independent) ** ½ Well, well, well… talk about being outside my wheelhouse!  Chameleon Project are a Toronto based band that combines syncopated grooves with the dissonance of jazz and the liquidity of electronica.  It’s not the sort of thing you sit down and analyze or wonder ‘what are they trying to get at’.  Whether it’s the soundtrack to a rave or you’re just trying to get some shit done around the house, Funk’n’Space has the energy you’re looking for.I can only think of one other CD in my collection of 5,000 that even comes close to this, an old Propellerheads disc.  It, too, is basically electronic soundscapes with odd spoken word inserts, which feels weird unless you’re open to it.  The focus here is on rhythm and texture, in some cases with a bit of a retro feel.  That’s all thanks to Snappy Homefry on bass, Kevin Lee on drums and samples, founder Josh Laing on guitar, FX and real time sampling, and Jordan Quinn on keys.  All are said to be avid students of music history and theory, with a diversely curated palette.Chameleon Project combines the authenticity of live music with the psyche of electronica to create music for the body and mind, and their gigs are said to be pulsating dance parties powered by a contagious energy.  The bio I got with this download says they’ve performed at a number of festivals I’ve never heard of and compares them to a number of bands I am not familiar with.  I can, however, confirm that Funk’n’Space is a good album to throw on when you’re trying to get some stuff done.

SCATTERBRAIN KXM (Rat Pak/ I-tunes purchase) ****Here is proof that you don’t need a year or 5 in the studio to come out with a kick-ass rock record.  It’s KXM’s second, the follow-up to their self titled 2014 debut and, if played at the correct volume, will leave your stereo a smoking pile of rubble.According to an electronic press kit I watched last week, KXM blocked off something like 12 or 14 days in the studio to try and come up with a record’s worth of stuff.  The kicker? Nobody was allowed to bring in any preconceived ideas- the plan was to show up empty, start jamming, and go from there.  KXM, by the way, are drummer Ray Luzier from Korn, bassist/ vocalist Dug Pinnick from King’s X, and guitarist George Lynch from Lynch Mob. It was during a birthday party for Luzier’s son that Ray offered George and Dug a tour of his new home studio, and the guys figured that they should try doing something together. I’ve only had the debut album a month or so, but it got me jacked for the new album.  As much as I looked forward to Scatterbrain it exceeds expectation, combining prog-rock elements driven by Luzier’s complex percussion.Never been into Lynch Mob much and after Korn’s first couple of albums I stopped paying attention to them, but I’ve been a King’s X fan since the early 90’s, so Dug’s vocals and rumbling bass feel familiar.  As a drummer I appreciate Luzier’s mastery of the groove, and when kicking things up a notch is the right thing to do.  The wild card and pleasant surprise here is George Lynch. I’ve always thought of Lynch as one of those 80’s ‘weedly-weedly’ guys, but on Scatterbrain (the album as well as the title track) his rhythm playing is muscular and inventive, simple when needed, and his leads are smoking- I’m talking EVH level stuff.  “Thick and juicy” feels like a good description.In the power trio format there is nowhere to hide and these three guys are just KILLING it.  You want a big rock album to get excited about?  Scatterbrain is IT.

NEVER TRUST THE LIVING Johnny Mastro & Mama’s Boys (independent) ****Talk about a slap in the face with a wet bar rag- this is an old school blues record straight outta New Orleans with the kind of heft, muscle and grime that’s pretty rare these days.  This is what it would sound like if Big Sugar decided to become a blues band.Never Trust The Living is rough around the edges in all the ways that I like, and the playing is exhilarating.  Offbeat Magazine describes them as “…cutting the line between Chicago juke and hipster club finer than it’s been cut in years”, and that seems like a good fit.  The band started out in LA but have called New Orleans home for a few years now, and it shows in the spirit of the music.  As with great music like the new KXM discussed above, this record happened quickly- the band recorded 78 takes of 27 songs over the course of two days and picked the 11 tracks that best captures the band.Never Trust The Living is one of those records where you can smell the sweat and the stale beer, and it’s quite intoxicating.  Throw in lyrics that range from confederate generals to space visitation and voodoo and you’ve got something more than just your average blues record.  The band is Johnny Mastro on vocals and harp, Smoke on guitar, Dean Zucchero on bass and Rob Lee on drums, and together they’ve developed their own rough and raw style with one step in tradition and one firmly planted in the present.If you’re thinking “I want something blue, and make it nasty”, then this is for you. 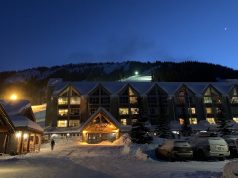