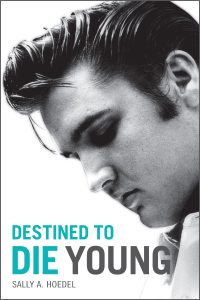 Over the years I never gave much thought to Elvis, judging him by the cheesy movies he cranked out in the 60’s and the bloated, pill-popping caricature he became in the last years of his life; an egomaniac that frantically gobbled prescription pills, ate deep fried everything, and died trying to take a dump.  While those elements do play into his narrative, Sally Hoedel’s book, Destined To Die Young, uncovers crucial family history and Elvis’s motivations for doing many of the things he did.  Reading it was a revelation, an epiphany for me.  As a man, as a singer, as a cultural icon he was so much more than many of us thought and this book has transformed my view.

To understand who he became, it’s crucial to go back to the beginning.  Elvis Aaron Presley’s problems started long before he was born.   Hoedel takes a well researched look at the Smith and Presley family lines, uncovering chronic health issues on both sides (heart and liver disease, bowel issues, compromised immune systems) that meant Elvis was dealt a losing hand from the get-go.  Both families were dirt poor, which limited their access to proper health care.  He was born at home because his parents were too poor for Gladys to go to the hospital.  Elvis often said that this was probably the reason his twin brother Jessie died that day.

The book also goes into his childhood, with the Presleys moving 12 times in the first 13 years of Elvis’s life.  From interviews with family and friends we find out that he likely had what today would be called ADD; he was a twitchy kid, constantly moving, a foot always tapping nervously.  I had no idea that Elvis was an insomniac too, dating back to childhood- he rarely slept more than 3 or 4 hours a night for his entire life.

Because he’d grown up so poor and watched his parents struggle constantly just to put a roof over their heads and meals on the table, Elvis’s goal was to make a good living so he could lift them out of grinding poverty, and singing was his way out. That he succeeded in doing so is a massive understatement; with the multitudes of friends and family he employed throughout his career, Elvis, a good Southern boy, did so for the same reason; to save those he loved from the poverty he’d gown up with.

The initial Sun recording session with Elvis, Scotty Moore and Bill Black for That’s Alright Mama, recorded while the trio was goofing around during a break, is referred to as ‘the big bang of rock & roll’.  In less than 2 minutes, 3 white guys recorded a black song (‘race records’ in those days) and gave the youth of the day their own music- something different from Frank Sinatra’s and Perry Como’s pop crooning.  Enter Colonel Tom Parker, a shady character who began managing the young singer with Gladys and Vernon’s blessing.   Elvis told him “you make the money, I’ll make the music.”

In the spirit of that arrangement, The Colonel locked him into a series of shitty movies that turned The King Of Rock & Roll into a punch line but hey, they made lots of money.  Elvis was a singer first and foremost.  Before rock & roll he wanted to be a gospel singer like one of The Blackwells, his mother’s favorite gospel group.  From the time Elvis went into the army in 1958 until the famous ‘68 Comeback Special (which Colonel Parker had wanted to be a Bob Hope-style Christmas show), he didn’t set foot on stage.  It was then that Elvis began to finally exert some creative control over his career, but a return to live shows (cross country tours and Vegas residencies, often 2 shows a day) with Parker cracking the whip spelled the beginning of the end.

Elvis’s punishing schedule would have been grueling for someone in peak physical condition, but as he began to grapple with growing health issues it ultimately became  impossible, with cancellations and hospital stays increasing.  Previously I had thought Elvis just another pill popping rock star, but after reading the book I see that the prescription drug use was an ill-guided attempt to deal with the crippling pain of health issues like arthritis and COPD.  Several doctors were known to give Elvis whatever he wanted, but Presley was his own worst enemy there.  Having a copy of “The Physician’s Drug Reference” book with him at all times, he believed he knew as much as doctors did about these drugs and their effects.  The king sized ego of being Elvis didn’t help, plus he had a huge payroll to meet and Parker owed a fortune in gambling debts, so he kept his only client on the road even though it was obviously killing him.

The end came on August 16th, 1977.  It was the day before yet another tour was to start and Elvis couldn’t sleep.  He took a book into the bathroom to read and do his ‘business’, and was later found dead on the floor at the age of 42.  The autopsy was ordered by the Presley family so the results are private, but Hoedel was able to find out through interviews that Elvis had shockingly enlarged internal organs (heart, kidneys, liver) and a compromised immune system.  His lifelong bowel problems had resulted in “Mega Colon”, which happens when there is nerve damage to the lower intestine and it doesn’t empty properly. Typically, the colon is 2 inches in diameter and 4 to 5 feet long.  Elvis’s colon was up to 5 inches in diameter in some places, almost 9 feet long, and packed with fecal matter that was described as having consistency of clay.

I have no doubt that, with better career management, astute health care and a responsible diet that Elvis would have lived past 42, but genetic health problems meant he still would not have had a long life.  Could he have made to his 50’s or 60’s?  We’ll never know.

Much of what we think we understand about Elvis Presley through the media is wildly inaccurate and incomplete.  Through exhaustive research and interviews with many of those close to Elvis, Sally Hoedel digs righteously deep in her attempt to set the record straight.  Before I read Destined To Die Young, other than liking a few tunes I considered Elvis Presley little more than a talented buffoon who was lucky to get as far has he did.  Now when I think of Elvis, a much clearer picture of who he was as a human being and the struggles he dealt with to achieve what he did emerges, and I now view his musical legacy in a different light. Thanks to Sally Hoedel’s book I have gone from impartial observer to fan and, even with all of his faults, have no trouble thinking of Elvis Aaron Presley as The King Of Rock & Roll.

Copies of this book may be purchased at www.elvisauthor.com