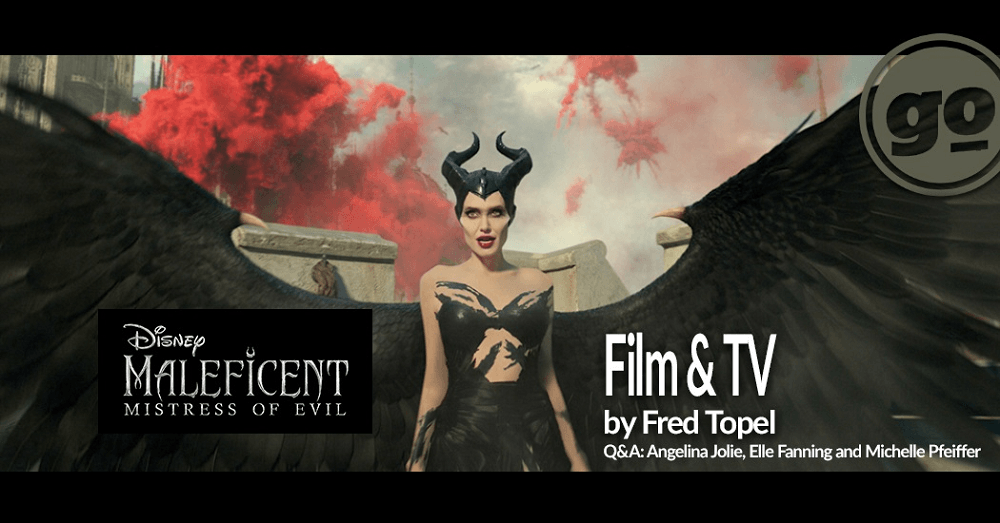 Maleficent was one of the first of the Disney live-action adaptations. It retold the story of Sleeping Beauty from evil queen Maleficent (Angelina Jolie)’s perspective. It had a happy ending for Maleficent and Princess Aurora (Elle Fanning), so now they’re back in a sequel, Maleficent: Mistress of Evil.

Now Aurora is getting married and Maleficent has to meet her future mother-in-law, Ingrith (Michelle Pfeiffer). Ingrith doesn’t approve of the marriage and schemes to assassinate Maleficent. Jolie, Pfeiffer and Fanning were at a press conference in Los Angeles and Gonzo was there to hear them speak about the Disney sequel, Maleficent: Mistress of Evil is in theaters Friday, October 18.

Q: Why do you think people responded to Maleficent?

AJ: It’s funny, it’s hard for me. It’s a strange thing as an actor, when you’re not an actor you’re always figuring out who you are, how people see you. You don’t know as much. Then you have social media, everybody knows everybody’s opinion. But as an actor, it’s strange. You put yourself forward and somebody says, “Well, that’s very you.” And you think, “Really? Is it?” When I got a call and they said, “We thought you were the only person who could play Maleficent. It was so obvious.” And everybody else says, “Well, it’s so obvious.” You just think, “I’m really not sure how I’m supposed to take that. And yet, I love her.” So maybe I just need to fully embrace it at this time in my life. Maybe years ago when we first did it I thought the audience responded to other aspects of her and not just that she’s a bit wild and full on and a bit much and fun. Now, I’ve been through different things in my life and I was so happy to feel strong again and to have some fun. I adore being her. There’s something about her that I’m now very proud that I’m associated with her.

MP: I think that’s one of the interesting things about this film is yes, it is a fairy tale but at the same time, it’s a very unusual fairy tale. What I loved also about the first film, it was so surprising. What I love is that kind of played in this gray area and it talked about good vs. evil and that all of us have a little bit of everything in us. I think in terms of strength and how that manifests itself, it hits differently in everyone. One of the things we loved about, for instance, Aurora’s character is that in many ways, she is ultimately the strongest and the wisest of all of us. My character is really brilliant and diabolical, but I wouldn’t consider her terribly wise. So I do think it’s interesting the way, and I like the way it plays out.

Q: There’s vulnerability in wisdom and Ingrith’s not vulnerable.

MP: Well, everybody has vulnerability. She just doesn’t wear it on her sleeve I guess. What she resorts to is a really, truly, at the end of the day out of a very deep fear.

Q: Were you channelling Bette Davis in Maleficent?

AJ: I certainly look to and think when I was little and I saw the cartoon, the animated film, clearly she is drawn with that inspiration and the voice, the original voice and I was so drawn to, of course, all of those women. There’s so much to learn from them. Any comparison I’m very grateful for.

Q: Does Aurora’s happiness about growing up and getting married affect her?

EF: Yes, and obviously in the original fairy tale, she’ s granted these gifts when she’s a baby. I think Aurora symbolizes the good and the kindness in the world, the acceptance. Obviously that was really shown in the first film when she’s much younger and much more innocent but still introduced to some dark things. Thanks, Mom. But that does carry over to the second film of her embodying this love of life and she lives between both worlds where she’s a human but she is queen of the Moors and has grown up against the Moorfolk. So she lives harmoniously with both sides so she doesn’t understand why the world can’t do that. But in the second film, what’s so great is that she’s definitely a young woman now. She’s grown up. She is stronger. She has much more conviction in herself. She’s learning how to gain her independence. I love the family theme in the movie because it’s very realistic to real life of growing up and separating from, leaving the nest and also making your own choices in life. She obviously is disapproving of Prince Phillip but we know that love wins and Aurora stands up to Maleficent which is a very strong moment in the film too. I think it might be shocking for fans to see that because Aurora’s taking charge of her own life but with kindness which is the most powerful of all.

Q: Were there any iconic movie villain performances you’re fans of?

MP: I think the first thing that came to mind is Heath Ledger as the Joker. I didn’t take that as inspiration.

Q: Was this a chance to top the villains you’ve played before?

MP: Boy, I’ve never actually looked at a part that way. I certainly enjoyed playing this. I was really delighted and surprised when I read the script. I was excited just at the notion of working with these two and then this is actually a really interesting, great part. So I think you just approach them all differently. I had a lot of fun doing this and I felt like I had a lot of freedom to try and bring some other colors other than try to find the humanity. I think when you asked the question about self-sacrifice, it may not appear at first blush that Ingrith is willing to sacrifice anything but she is willing obviously to sacrifice her son, but I think that it doesn’t mean she doesn’t love him. It’s complicated.

Q: Did you have a favorite costume? Could you poke yourself with treacherous costumes?

AJ: I did actually poke myself. But it’s all fun. You get so supported in these roles for the magic. Everybody working towards this idea of helping with the costumes or the visual effects, the makeup to help bring you into a creature. It’s a big team and so the costumes are certainly part of it. Some of my costumes were half there and then we had to be flying in the rigs and things. The trick of it was sometimes that I need to look strong when I’m on the ground but then they had to float when I’m up in the air. So that’s fun.