“I think it is a larger subject, in that we have failed to recognize the profound affect Vancouver has had on popular music…

…You’ve probably watched the Foo Fighters series regarding all of the US cities and their influence on the music industry as a whole. When you tally up what we’ve done here, in Vancouver, thanks to a strong community, it’s really impressive. It precedes the work at Little Mountain Sound. Mushroom Studios, for example, and the recordings that have happened since, at Bryan Adams’ studio in Gastown.” – Mike Klassen, Vancouver Columnist –

The home of glam rock’s greatest air-punching anthems,
cinder blocks blanked by a coat of latex beige, bland and unidentifiable over any back alley walls nearby.

Laying between Fairview’s condo-encrusted slopes and downmarket Mount Pleasant are warehouses – rows of them. A plethora of non-descript companies exist here: printers, computer wholesalers, couriers. Only the strong aroma provided by a coffee company stands out, and it is something unique on streets full of sameness.

The homes of a few brave residents are left here, but they’re besieged by small businesses all round. Mostly, this neighbourhood is descended upon by day, by employees who dutifully carry on the production of widgets. However, within one building is the deadened, half-lit ambiance of a recording studio. Here they’ve produced the greatest air-punching anthems of the last decade. This is Little Mountain Sound.

In 1986 a group of no-name New Jersey strutters visited “Little Mountain,” drawn by the talents of in-house producer Bruce Fairbairn. Bon Jovi was the name of the act, and they recorded “Slippery When Wet.” The LP’s title was a tribute to Vancouver strip clubs and the latest on-stage shower craze. “Slippery” sold over 8 million copies and was the number one best seller in 1987. Hundreds of Bon Jovi-types sprang up from that success, and a boy can hardly hold a guitar now without having the complementary streaked hair and pout.

In 1987, when Bon Jovi was killing it, five more men occupied the studios. When they arrived, haggard, beat, no one thought much of them either.

These guys were the Dennis Hoppers of rock. They had little credibility, and no selling power, just a famous past. Bruce Fairbairn put them to work, that is between visits to Alcoholics Anonymous. Their presence at Little Mountain was so nonchalant they would rehearse on the grassy boulevard out front on sunny days. Eventually, their album “Permanent Vacation” got released, and Aerosmith were on the comeback trail.

Two multi-platinum successes proved to the recording industry they were on to something here. Little Mountain Sound in the backwater known as Vancouver became the hot studio. Soon Whitesnake would record their biggest seller here, Motley Crue did their stint, then The Cult recorded their hit mainstream LP, “Sonic Temple.” A virtual rock Who’s Who passed through Vancouver to record, and to relax.

Little Mountain inadvertently became the Betty Ford Centre of recording studios. A lot of these acts had been on a long binge beforehand. But now Motley Crue boasted that they drank orange juice during strip club visits. Steven Tyler of Aerosmith dined at the Naam, fuelling up on vegetarian dishes. It was a nice marriage, these guys came up to Vancouver to record and get healthy, while locals got to trade their rocker sightings. Did you see Motley Crue jump on stage with those guys at the Coliseum? No, but did you see Bon Jovi jump on stage at 86 Street? And so on.

Bon Jovi and Aerosmith eventually returned to record follow-up LP’s, but it wasn’t so sleepy around the studio anymore. The fans began camp out on Little Mountain’s doorstep: autograph-seekers, groupies, and kids with nothing better to do. Motley Crue first brought the kids out in numbers, and the first fan toting a spray paint can. The plain back wall of Little Mountain studios subsequently sported the words, painted in black, MOTLEY CRUE ROCKS.

Check Recording Engineer, Mike Fraser’s extant list of bands he’s recorded over the years while he was at Little Mountain Sound @http://mikefrasermix.com/credits/

It became customary; the fans needed to get the names of their own favourite acts on the wall. GUNS’N’ROSES!!!, SKID ROW, AC/DC, POISON, SLAYER, METALLICA were added. Then it became a message board, for dialogue between those fans who might of just missed each other. SUE WUZ HERE, POISON SUCKS, and the grateful, THANKS BOB ROCK & BRUCE FAIRBAIRN – YER GREAT.

Quite by accident, the plain back side of a building became a landmark. This collection of scrawls represented the spirit of the suburban rock fan. They were the social equivalent of cave drawings of game left by early man. Someday, 3000 years hence, when Vancouver city is forgotten, and Little Mountain recordings are relegated to classic rock playlists, an enterprising archaeologist will unearth these scrawls and likely surmise we were a culture of rockers.

The swaggering ex-Van Halen frontman is no stranger to the power of rock’n’roll myth. Dave could spend night after night recounting Van Halen hyperbole. And while he was in Vancouver that’s what he did. He’d have a table reserved at the Cecil strip club for him and his cronies, he’d start to talk and everyone would listen. If common fans got too close, burly men would step in front of them and order them away. This is what Dave meant by getting back to his roots. Go to a public place, and pay thugs to keep the public back.

Dave’s stay in Vancouver was classic hype. First he told everyone he was staying at the seamy Nelson Hotel, to make the singer and bandmates feel “rougher.” Close at hand cat fights between whores would keep him and the boys awake nights, you see. Once in a fit, says Dave, he chain-sawed a hole in the wall of a Nelson suite to make it larger. Which begs the question, where did he get the chainsaw?

Little Mountain was no longer the “Betty Ford Centre” thanks to Dave – it was summer camp, “Meatballs IV” if you’d like. He kept a very high profile, riding his mountain bike around downtown, or between the studio and his real hotel, Le Meridien. And after all this exposure to our fair town Dave concluded, “You know, the best thing about Vancouver ain’t the beaches, or the mountains, no. It’s the strippers, man!” Perhaps he’s right, lord knows Dave has visited more places than most of us.

As a tribute to Vancouver’s pronounced best asset, Roth hired local airbrushers Mad Artist to add a G-strung babe to Little Mountain’s back wall. And – in a polite gesture – DAVID LEE ROTH is drawn over her bare, swollen chest! Pity 4990’s poor archaeologist, who’s now got to interpret who this woman is.

At once, the back alley behind Little Mountain Sound was no longer a place of private worship for rockers. Onlookers came, and so did the press. No doubt the hard-core loiterers were incensed. She was a nice-lookin’ babe, yeah, but the wall had been desecrated.

The hardest of the hard-core hangers-on were two unidentified girls, described by workers next door as being no older than 16, and dressed like tarts. In good weather they’d hold all-night vigils outside the studio. A picnic table sits across the alley, and it’s where employees of a neighbouring microfiche company dine and take coffee breaks in summer. Most mornings the staff went out there though, the table was covered in new felt pen doodles, styrofoam coffee cups, and burger wrappers, compliments of the girls.

Recording in Vancouver at Little Mountain Sound
1 of 16

This pair pushed the bounds of decency when they began to write on the wall. Roth’s stripper got the most attention, but finally the whole wall was treated to their girls’ can commentary. The wall was ugly, sure. Even without the graffiti it was ugly. But the two girls saw to it that it was profane.

Another unidentified player got involved at this point. One night someone painted a bathing suit on Lady Roth; this was decent society’s quiet contribution. If our archaeologist discovered the wall in its latest state, he’d assume we were a society suffering moral chaos.

At last, City Hall responded to complaints about the wall. First they notified Little Mountain Sound that they required a mural permit for their back-alley beauty. Little Mountain applied for the permit which would have cost them $134.00. But the gloves finally came off. Contrary to official policy which says do not censor, the city ordered the studio to paint over the whole wall.

Afterwards, the studio posted a 12″ x 18″ protest sign directing complaints about the new paint job to the Mayor’s office. Complaints are of little use now. It’s unlikely Roth will buck-up for a new mural, or that the wall will ever regain its old splendour. At best, we could hope when they’re done restoring the Sistine Chapel, when they’ve wiped away the last fig leaves and layers of soot, they might try their hand at Little Mountain.

Sadly, our archaeologist will conclude that we were a boring lot. Left behind are cinder blocks blanked by a coat of latex grey. Bland and unidentifiable if not for the memory of what lay underneath.

Steven Tyler and Joey Kramer were absent, but the rest of the weary-looking band members enjoyed a sun break. It was a Sunday afternoon, and I just happened to be packing my camera when I drove past the recording studio. It was a complete shock to see them sitting there, and a pleasant surprise when they kindly consented for me to take a picture. The LP they were recording – “Permanent Vacation” – went on to sell approximately 2 million copies.

* Originally published in 1991 with the title “Hard Rock and Truancy”, which was a dig on the incumbent city hall government’s election slogan from that year – “Hard Work and Decency”.

Mike Klassen is civic affairs columnist with Vancouver Courier, the city’s leading community publication, as well as a Huffington Post contributor. Klassen is Vice President, Communications and Stakeholder Relations at BC Care Providers Association, and is President of the board of trustees for PAL Vancouver, a non-market housing development for members of the arts community. 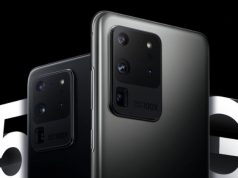 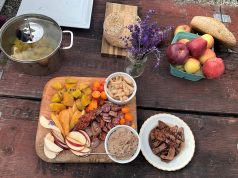 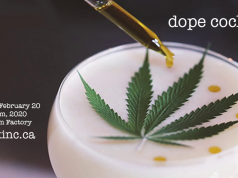 Cannabis-Infused Cocktails That Are Totally Dope!