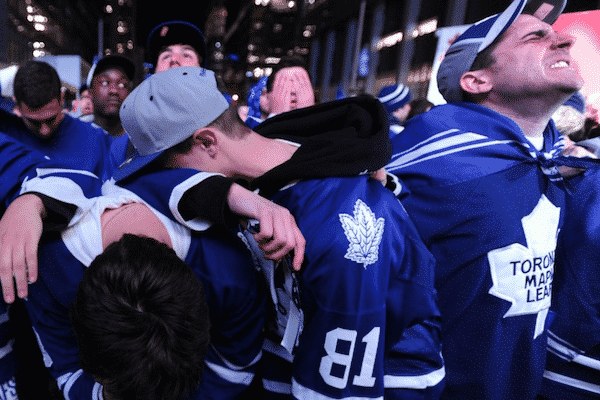 So the real questions is this – is my replica mini-Stanley Cup beer stein half empty or half full?

While the lump in my throat is likely scar tissue from a previous tracheotomy it feels like a bitter pill of sorrow from watching the Maple Leafs tumble (yet again) from the top of the hill to the pit of despair. It hurts and it won’t go away.

The Maple Leafs set their new team record with 54 wins and 115 points in the regular season but found a way to blow a 3-2 series lead to the Tampa Bay Lightning in the best-of-seven Eastern Conference first round, losing 4-3 in overtime in game six on Thursday and 2-1 in game seven on Saturday. It’s the sixth consecutive season the Leafs have been given the boot in the first round of the playoffs.

Certainly a significant sports related kick in the you-know-where,

Despite the disappointment (and huge loss of interest in the remaining playoffs) I’m determined to take the high road and find some good in this evil.

Two weeks ago, just prior to the start of the first round (without knowing the match-ups) I made the following guesstimation.

“The strongest teams in the Eastern Conference are Florida, Carolina and Tampa Bay… those three clubs and Toronto will be the top four emerging (to the second round) in the East.

In the Western Conference the top four will include Colorado, Edmonton, Calgary and Minnesota.

Sebastian Aho will win the MVP.

Close – but not perfect.

The remaining rounds will unfold as such. In the Western Conference Colorado will defeat St. Louis (not Minnesota) in six games while Calgary will defeat Edmonton in seven.

Nothing changes with the Cup final – Carolina defeats Colorado in seven.