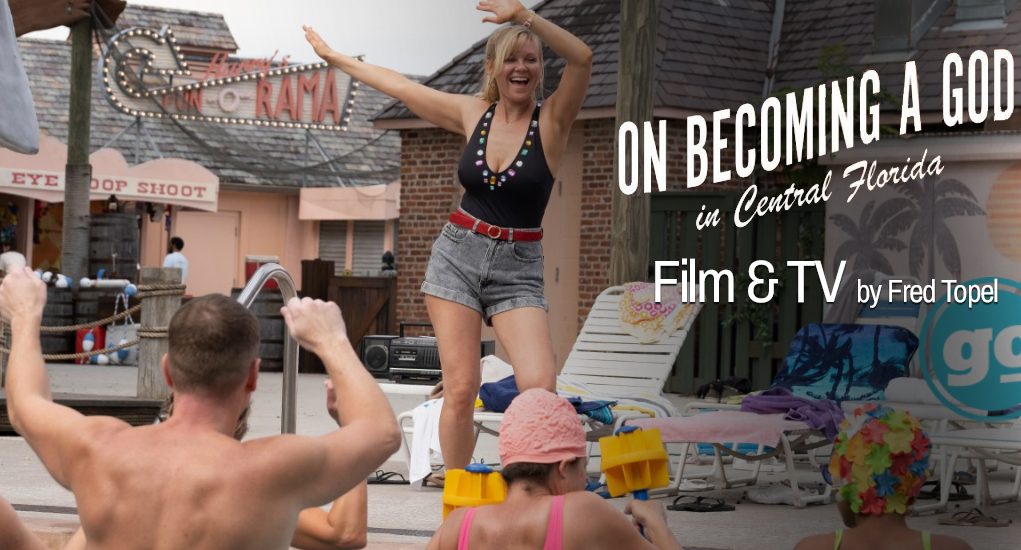 Kirsten Dunst Q&A: On Becoming a God in Central Florida

Kirsten Dunst is going back to the ‘90s! That’s where most of us first met her in films like Interview with the Vampire, Jumanji and Little Women. Her new Showtime series On Becoming a God in Central Florida is set in 1992. Dunst plays Krystal, a woman whose family has lost everything in a pyramid scheme. So she’s going after the mastermind of the scheme herself.

Gonzo: Have you been nostalgic for the ‘90s?

Kirsten Dunst: I’m not nostalgic about the ‘90s I don’t think. I don’t know, for me it’s just my childhood so I think about Wayne’s World and things like that, or like the Grey Poupon commercial. Remember that? When you used to drive with your brother or sister, have people roll down the windows and ask for Grey Poupon. So yeah, I have a lot of memories but I’m not dying to get back into those jeans or anything.

Q: Have you learned more about ‘90s music now?

KD: I kind of grew up in the ’90s, so I’m familiar. But yeah, we have a great music supervisor, Zach Cowie, that I didn’t know that Juice Newton song. There’s a lot of gems in the show.

Q: Do you see any similarity between this and Drop Dead Gorgeous?

G: Did you see when people were freaking out that Drop Dead Gorgeous was streaming again?

KD: Hulu, I know, it’s so great. Even I was surprised you couldn’t find it anywhere because a lot of people come up to me and tell me that’s one of their favorite comedies, so I was happy that it has a light now.

Q: How much did you know about companies like Amway that operate in this multi-level marketing?

KD: Not much to begin with. I hadn’t watched the Herbalife documentary. I wasn’t totally familiar with that kind of multilevel marketing scheme, but I was more familiar with, like, cults and that kind of thing, which I think this is comparable to. I was in a cult. No, no. I was not.

G: I got lured into an Herbalife meeting and they did not like the questions I asked.

KD: You were too smart for it.

Q: What’s the craziest thing you’ve done on the show?

KD: I have one. I mean, in Episode 2 I was supposed to to do a dance with a snake, and I hate snakes. I couldn’t even move like this holding a snake. I just would be petrified. So I was, like, “You gotta get a rubber snake. This ain’t happening.” And then the director of Episode 2 was, like, “I can’t shoot you basically holding a rubber snake. This is never going to work.” So then these two came up with, “What about a puppet dance?” with two puppets attached to me on sticks. So Jimmy rigged it with his friend, came over to my house in a day, and we just started practicing and learning. It was one of my favorite things I’ve ever done.

Q: You’ve found great material ever since you were five. What is it that you look for?

KD: Definitely not five, but thank you. First of all, thank you. To me, mostly I always looked for director or things that I would want to see, basically, or characters I’d like to play. And I have to say, this material was just so special to me. It’s been three years now, and we’ve really had a little bit of a roller coaster of how this show actually got made to now being at Showtime. We’re the little engine that could and we did it, you guys. We killed it. We went off. We made our own show and Showtime wanted it. I’m like we couldn’t be happier. We worked hard. There were so many times where I was like I don’t know if I can do this. I just had a baby, da da da. And we all did it. And we made it happen and cast it in, like, a month. We did everything so quickly. I mean, the guys were back to back like, episodes were just coming out exactly when we needed it. So it was a lot of hard work, but I knew reading that first episode. I was like this is one of the best things I’ve read. So I guess to me it’s half intuition of what I want to play and then also what I’d like to see personally. I actually haven’t felt so much pride for something as I have for this, because I feel like it’s been such a hard road for all of us. And I’m like seeing trailers and seeing things, like, I almost get a little emotional, because we did it. We did it.

Q: Do you ever want to revisit a character you’ve played in the past?

KD: Well, with this one, hopefully I will revisit that character. I definitely miss Peggy from Fargo. That was a really fun role for me and I love doing that accent. I love that accent.