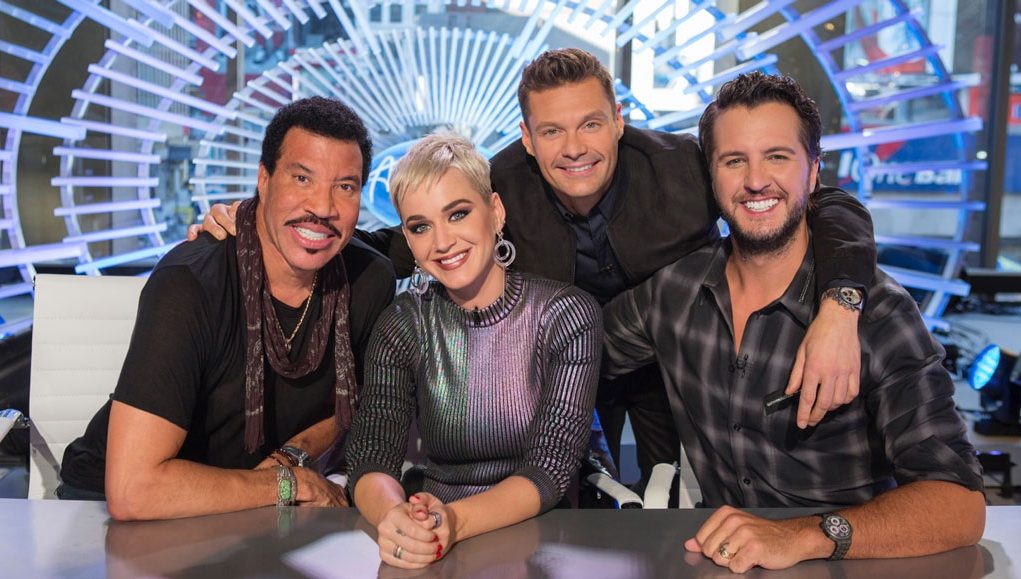 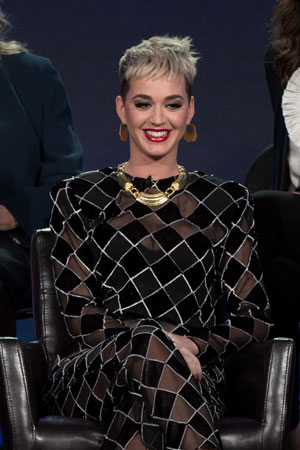 For most aspiring singers, just meeting Katy Perry would be the moment of a lifetime. When American Idol returns, aspiring singers are going to face Perry as a judge. The new ABC re-launch of the singing competition features Perry, Lionel Richie and Luke Bryan as the panel of judges.

The panel of judges partied with the Television Critics Association to celebrate the new season of American Idol. Gonzo was there to hear the trio sing at the piano, and join reporters asking Perry questions. American Idol returns March 11 on ABC.

Gonzo: Would you be extra tough on a contestant who chose a Katy Perry song to cover?

Katy Perry: I wouldn’t be tough but I wouldn’t say it would be the smartest thing to do, unless you’re reinventing it. Typically I would be singing it the night before and I’ve sang it 10,000 times. If you reinvent it, then you reinspire it for me and so you give me that dopamine hit of, “Oh yeah, I feel that so I want to know what you do with something else.”

Q: What’s the most important quality you bring to American Idol?

KP: Brutal honesty. I don’t know, authenticity. That’s what I built my whole career on, or tried to. It’s not easy to stay authentic in Hollywood but I guess it would be that.

Q: What’s the best criticism you ever got?

KP: I get a lot of criticism from my managers. That’s why they’re still my managers after 10 years. It’s really about keeping people around you that say no to you.

Q: What was it like for you to see people from around America struggle the same way you did?

KP: Man, it’s a beautiful hurt. You really get invested in their stories. Obviously after you realize they have that kind of diamond in the rough. It’s hard when they’re trying to sell the whole thing on the sob story because it’s like, man, everybody’s going through something. Everybody comes from somewhere. I’m not dismissing it. I don’t want to make light of your situation, but this is a business and we are here to find someone to elevate to make an American Idol. It’s hard hearing the stories and that’s when you want to be an executive. That’s when you want to detach and not be an artist because you want to be cut and dry, here it is.

Q: Is that hard for you?

KP: Yeah. Like, Lionel’s the legacy. He tells all these stories about Whitney and Prince, all this info. You just sit there and Luke is a really good nurturer. He slowly leads people to whatever path they need to be on. I am very serious about it. I’m more a straight shooter, cut and dry. I do the jokes. I get up and dance, but at the end of the day, I see sometimes different things than my other judges. I see where the music industry is going and personalities and different styles, who’s writing original songs and who’s really going to be an artist because there’s a lot of singers out there. Half of you guys could sing too. I say a lot of times that it’s not a singing competition, although when people come and they can’t sing, I do say it’s a singing competition. But it’s not a singing competition. You want to find a star, an artist, someone to believe in. You need your heroes. You need your icons. You need your characters. 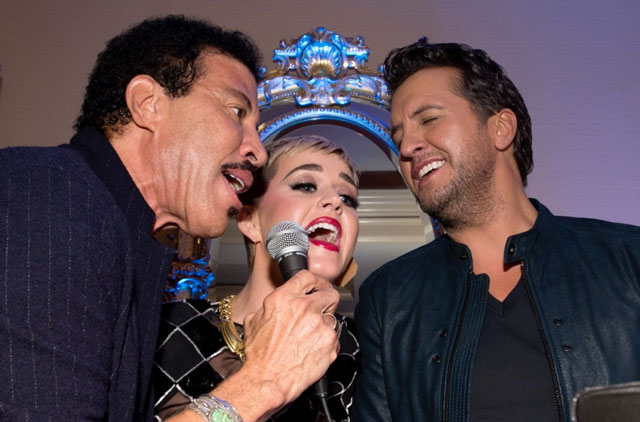 Q: What don’t kids understand about the business before they get into it?

KP: Oh, that’s a great question. They don’t understand that it’s not overnight, that there’s a lot of patience involved, and that there’s an immeasurable amount of work. It’s really a lot of work. I just flew in from Houston yesterday. I’m on tour and I’m still juggling  all of the balls. I should be on an island relaxing by now but for some reason I’m not.

Q: When you do have free time, how do you like to spend it?

KP: I love movies. I love traveling. I love culture. I love modern art museums. I’m just like anyone.

G: Do you go to a movie theater in disguise?

KP: No. I mean, I wear an Adidas track suit, like the one Elton John wears and Madonna wears, like they’ve worn their whole careers. That’s the trick. Just wear the same thing and nobody cares.

Q: Do you have to constantly reinvent?

KP: I think you’ve got to keep it spicy for sure. Especially with young people, their attention spans and people in general, our options and choice. We have so much choice we don’t even know what to choose these days. So I think you really have to separate yourself. Sometimes that means you have bells and whistles, or maybe you’re just such an authentic person you can hear it in the voice. I don’t want to hear people’s voice. I want to feel their voice.

Q: What does it feel like to be on stage? How do you convey that to someone?

KP: Well, it varies and especially when you’ve been doing it for so long, but it’s a great feeling. You get really addicted to it. It’s got great things about it and it’s got not so great things about it. You really have to know who you are so you don’t get lost in it but you really appreciate it.

Q: Do you feel pressure to be a role model to women?

KP: It’s not pressure. I don’t think the right word is pressure. Definitely a responsibility. I think I always preface everything I do with an asterisk of, “Hi, remember, I’m human. I will probably let you down.” Also, I’m in the business of rock n’ roll which is not in any way a politician figure. So just remember rock n’ roll is based on rebellion, but I’ve learned a lot along the way. My job is just to be a storyteller with all the information that I’ve absorbed and to help people feel really wonderful feelings. Sometimes I like to try and be cool and that doesn’t really work for me. People just want me to be authentic and that’s all I want to be too. I’m proud to be that girl wrote Roar and proud to be that girl that wrote Firework. I’m proud that those songs are little keys that unlock this human soul and connect people. I’m going to be trying to lift people up out of their situations for the rest of my life I think. 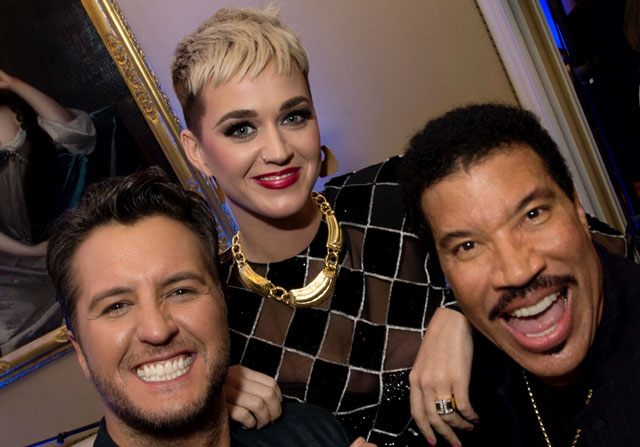 Q: Who are your inspirations?

Q: Are you having fun with the fashion aspect?

KP: Yes, for sure. I think for the live shows, I’m going to take it to 11. I don’t want to scare them. They’re already freaked out by the roster when they walk in. I’m coming in always from a show the night before, but I might pull it together. I’ll bring some.

Q: Do you have a great memory of starting out?

KP: Oh yeah, I was just foaming at the mouth. I was just like, “Put me into the ring. I’m going to show them.” I was just like all of those people that audition. I was literally like, “I’m going to do it. I’ve got something to add” and I always really felt like I had a perspective that was different and that I was an artist or a character. I think that’s what we look for is that instant identity, not just singers. But I had an unceasible, I don’t even know if that’s a word, fine, you’ll look it up. I had so much ambition, so much drive. I really wanted to prove and I knew I’d been given a gift.

Q: You’re also threw yourself into it.

KP: Yeah, I mean, I was all about the bells and whistles as well. I can’t build a career off of bells and whistles. You have to have great songs, be a great performer, great singer and if you’ve got a little icing on the cake, it tastes good going down.

Q: How was the first time you were on tour?