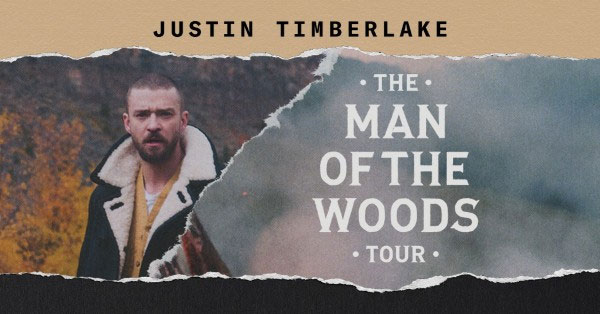 JUSTIN TIMBERLAKE THE MAN OF THE WOODS TOUR

Vancouver, BC / Canada (February 12, 2018) – Following the release of his highly anticipated album Man of the Woods and his epic Pepsi Super Bowl LII Halftime Show performance and following last week’s confirmation of tour dates throughout Europe and North America, Live Nation has confirmed a 2nd show in Vancouver on November 9 due to demand. Tickets for the additional show go on sale Monday, February 19 at 10am, available at www.livenation.com.

Timberlake’s fourth studio album Man Of The Woods was released on Friday, February 2. On February 4th, he performed for the third time at the most watched musical event of the year, the Pepsi Super Bowl LII Halftime Show. Timberlake’s last tour was the critically acclaimed The 20/20 Experience World Tour, which sold out arenas and stadiums around the globe in 2013 and 2014.

Members of The Tennessee Kids Fan Club are also eligible for pre-sale ticket purchase. Forcomplete The Man Of The Woods Tour VIP packages information or to purchase, visit https://vip.justintimberlake.com/

At every U.S. stop on The Man Of The Woods Tour there will be a VIP Verizon Up section, putting customers up close and personal to the stage and JT.  Verizon Up, the company’s loyalty program, is all about thanking customers through everyday rewards and exclusive experiences, like getting closer to the artists they love – including Justin Timberlake.