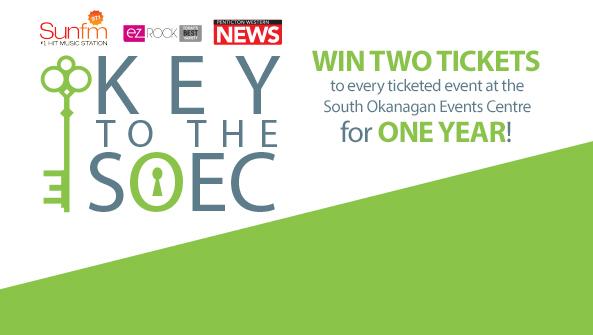 FOR IMMEDIATE RELEASE:Thursday, July 14, 2016OUR BIGGEST CONTEST EVER: KEY TO THE SOECWin two tickets to EVERY ticketed event held at the SOEC for an ENTIRE YEAR#ISAIDEVERYEVENTPenticton, BC: The South Okanagan Event Centre (SOEC), in partnership with Sun FM, EZ Rock and the Penticton Western News, are thrilled to announce the biggest contest the SOEC has ever held: Key to the SOEC!The sweepstakes offers patrons a chance to win two tickets to every ticketed event at the South Okanagan Events Centre for one year. Starting today, Thursday July 14, patrons are invited to enter for a chance to win the ‘”Key to the SOEC” online at SOEC.ca or through the South Okanagan Events Centre Facebook Page (www.facebook.com/theSOEC). No purchase necessary.“The Key to the SOEC is a way for us to say thank you. For the past eight years, patrons from all over the Okanagan and beyond have come to Penticton to support concerts and events at the South Okanagan Events Centre,” remarks Dean Clarke, General Manager of the SOEC. “Their interest has allowed us to bring in world-class acts and this promotion is simply a way to show our appreciation for their continued support.”The promotion originally began at a Spectra managed sister-building, and has become an exciting way for the venue management company to thank patrons for their unwavering support at hockey games, concerts and events. In addition, this sweepstakes offers patrons a chance to opt-into the SOEC Cyber Club, an email database used by the SOEC to inform patrons about exclusive pre-sale offers, as well as provide information on upcoming concerts and events.The contest begins today, July 14 and closes at 11:59 p.m. PST on August 10, 2016. Patrons will be allowed to enter the sweepstakes once, with the opportunity for one bonus entry per share on public social media posts. Complete contest Rules and Regulations are available at SOEC.ca.Tickets included in the promotion:Rob Thomas: Wednesday, August 31, 2016Five Finger Death Punch & Papa Roach with very special guests SIXX A.M. and From Ashes to New: Saturday, September 10, 20162016 Vancouver Canucks Young Stars Classic: September 16 to 19, 2016Spend the Night with Alice Cooper: Sunday, October 16SLAYER with very special guests Anthrax and Death Angel: Wednesday, October 19MAMMA MIA! Farewell Tour: Tuesday, November 15, 2016Celtic Thunder, Legacy: Thursday, November 24, 2016Penticton Vees Regular Season Home GamesWestern Canada Cup: April 29 to May 7, 2017With more shows to be announced!