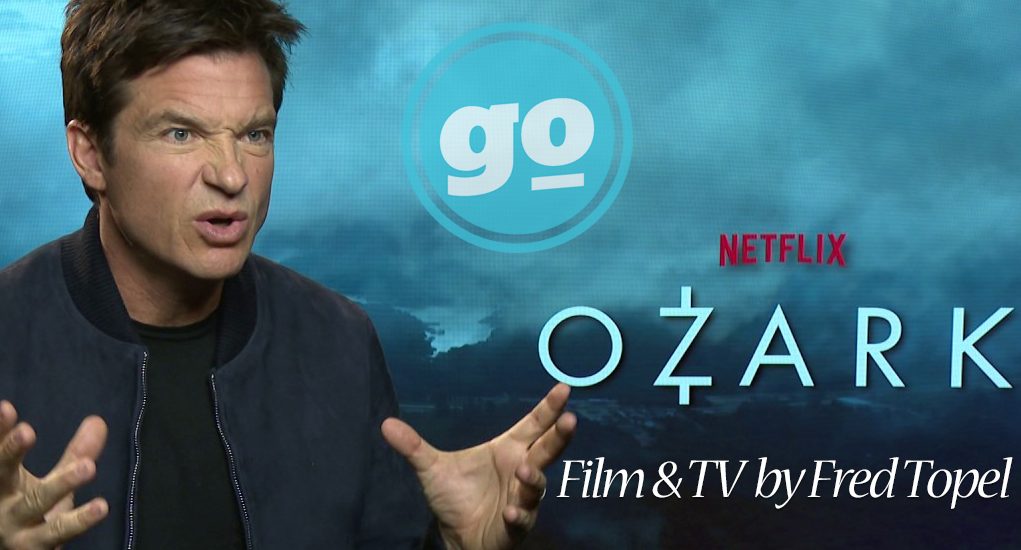 Gonzo attended a panel for Jason Bateman’s hit Netflix show. Not the revival of Arrested Development, which Netflix saved years after Fox cancelled it. But Bateman stars in the Netflix drama Ozark which is coming back for a second season.

Bateman plays Martin Byrde, a financial advisor who moves his family to the ozarks to escape the drug cartels. Given that season two exists, you can imagine disappearing from them is not as easy as they hope. Here is the Q&A with Bateman, which Gonzo was there for and also added questions about Arrested. Ozark returns August 31 on Netflix.

Q: Do you think as fast on your feet as Marty does?

JB: I think so. It doesn’t come from a place of manipulation, but my job is to play different people and to be aware of typical dynamics and things. So you can tell when somebody gets bored, like that look on your face right now means I better wrap this up.

Q: Is Marty a darker version of Michael Bluth or is he more screwed up?

JB: Well, I’m not sure. What I do know is what’s really attractive to me about both those characters is that they are somebody that could be familiar to us, the audience. Us normal folks that aren’t living in a family like the Bluths or dealing with drug cartels. But that this is hopefully kind of an everyman, somebody that can be your proxy. So I try to play as many characters as I can that are that because I love shaping an audience’s experience. That’s why I’m attracted so much to directing. Oftentimes that central character, that everyman, that straight man provides that same sort of service on camera that I might behind camera.

Q: Was there pressure in season two knowing the show has an audience?

JB: Well, the pressure honestly, I’m not sure if that’s the right word there. There’s an intoxicating feel of encouragement that you have that people are liking what you’re doing and would like to see more. So it’s somewhat comforting in a sense that what we are doing instinctually is being well received. So it’s a nice calming thing to know that you can just work off of instinct and that is fueling something that people like. I mean, any time you do something and you find out that people are enjoying it, is a huge relief, and it supplies great encouragement because we’re all in a bubble and we don’t know if anyone’s watching or if they’re going to like, and so it does sort of give you permission to continue to doing at least what you have been doing. The writers understand that the audience deserves an escalation. If there’s going to be more episodes, you don’t want redundancies. Plus, I think there’s so much good television out that the demand is high to keep bringing it and making it better than the last bit, and sometimes that comes in ways of plot escalation or emotional complexity, or aesthetic and adding great actors and killing off some that you think might not ever die. How could they carry on the story if they kill that person? That’s another dynamic that’s present in today’s TV.  So, it’s a fun process, for sure.

G: What’s your sense of whether there’ll be another Arrested Development season?

JB: Well, I know that there’s the backend of this season that’s yet to come on at the end of the year.

G: So they’d wait until after those air to decide?

JB: I would imagine so. If I’m the person writing the checks on things, you wait to see if anyone’s watching and then that informs your decision.

Q: What was the most unconventional thing you ever did to get a part?

JB: I don’t know if I’ve ever done, there’s no great story, I apologize, for doing something unconventional to get a part. There is that balance that an actor deals with. You try to find that perfect balanced between caring and not caring. We all dealt with that in high school when you’re trying to flirt with a boy or a girl. You want to kind of play hard to get but you want to be convincing about it, that healthy level of indifference that can sometimes permeate a room and can work for you or against you but you need to still have a commitment to it to be able to compete. That’s a difficult part of our business is trying to figure out when to really, really tell them you want it or need it versus not really needing it because you kept your day job. There’s something to be said for that.

Q: Have you ever come up with a psychological classification for your character? He gets awful, horrible, bad news and he doesn’t flinch.

JB: Well, he’s emotionally repressed, and that’s something his wife gets on him about in the second season. So, he tries to emote a little bit more but I think we will have to rightfully defer to the really smart writers on this show for making those kinds of intelligent decisions about what’s the right cocktail, what character should have sort of a reserved demeanor versus another character that might be a little bit more hysterical and what’s the right balance for all that stuff. Then our job as actors is to try to see that in the script and perform that, and so we hope we’re all just doing our job.

Q: Do you talk to them about that?  Since you said you wanted to defer to them.

JB: Well, I guess I defer to them to answer this question more intelligently than I can, but they deserve a great deal of credit for those who enjoy the show for enjoying it. Yes, we all talk with them quite a bit. Laura [Linney], right off the bat, had some incredible ideas about what her character could and should do, and obviously they were more than receptive to hear anything that Laura Linney might have to say about what she can and would like to do because that’s an incredible asset that we have, not to mention Ms. [Julia] Garner. Then, my duties as EP is I’m involved in sort of the more global look at each season and the thematics, and all of that other kind of fun stuff, and then directorially there’s another layer of contribution and I feel very lucky to be able to collaborate with all of them on that.

Q: Ozark has been compared to Breaking Bad. Do you see that, and can this family survive being in this situation?

JB: You look for opportunities to relate to the audience you’re trying to reach and, obviously, family dynamics is an evergreen one would try to link and tether any show or movie to, because everyone’s got one, whether it’s a functional one or not. So I think it is a smart decision from Chris Mundy to really have that informed where everything goes. The decisions that are made are meant to maintain the happiness of the family or to get out. The Byrde family is trying to end this show.  The Byrde family is not interested in Season 2, 3, 4, 5. Like, they want to get home. They want to be done with it. So, all the decisions are made to end this and make this healthy again, get boring again as a family. So that is interesting to watch as a reader and to try to perform. As far as the comparisons to Breaking Bad goes, we feel fortunate at any time hear that. Obviously, that show can never be touched. If we get halfway there to their quality or longevity, we’ve done a lot. So we’re not trying to replicate or emulate what they did narratively or aesthetically. But I think what they might be referring to is sort of this family you can relate to that’s going through a set of decisions that probably were not very smart. And how do they navigate the clash of those two worlds? And the plight of an ethically-challenged middle-aged white guy, kind of not making great calls at times. In our case, it’s to kind of trim a corner off an American Dream pursuit. He’s kind of cheating a little bit, and they make this decision early on. I think you see in Episode 8 of the first season how that originated, what that decision was, and they’re paying the bill for that.