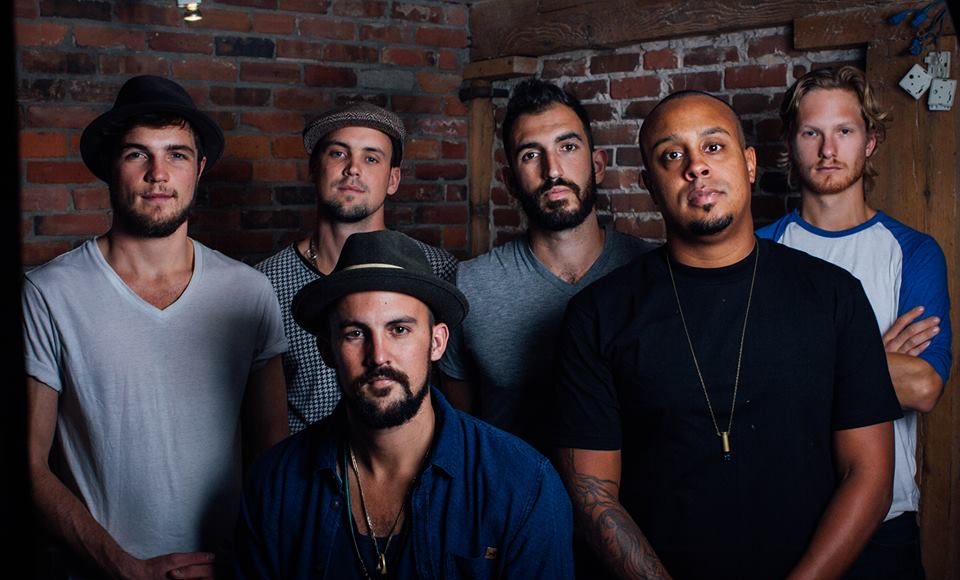 East Vancouver’s Alt-Soul quintet The Boom Booms have been writing, travelling, performing, and sharing their lives together for 10 years now. From humble beginnings in hippie vans, these boys have managed to turn their friendship into a finely-tuned and internationally touring band. These gentlemen work hard, but they seem to always make time for play in their life.

When they came through to perform the Kelowna Community Theatre recently, Aaron brought along Grandpa Stu. At 92 years old Stu has been the band’s biggest supporter, and has been known to go out on tour with the boys for touring stints throughout BC and across Canada. Throughout the interview Grandpa Stu watched his boys intently, and listened to me ask them questions that I was sure he must have heard a thousand times.

This is the kind of love that The Boom Booms share in their lives and at their shows, and I was hoping to catch a glint of that in this interview.

Indie Dan: Welcome back to Kelowna gentlemen! Thanks for coming back, and we have you at the theatre tonight for the Let’s Hear It BC Juno tour, but we’re no strangers to The Boom Booms here. Where have you guys played here?

Tom Van Deursen: That was a dope gig. That’s a cool room. And Keloha festival twice as well when it was running.

ID: So you’ve been doing it for ten years now, working in the industry. Where has it taken you?

TVD: We did a busking tour through Western Europe for six months. We bought a Westfalia van over there from the mid 80s. Seven guys, six beds… [laughs] We did that, and we also drove from Vancouver down to Panama and back, also a six month trip and kind of booked our own DIY shows along the way doing hostels, and venues, and peoples’ back yards. We’ve toured The States, toured Canada, played some shows in Maui. Brazil – we spent three months in Brazil, on foot. [Tom forms air quotes and chuckles] We took a lot of busses.

ID: So is that part of The Boom Booms’ identity? Travelling, exploring and life on the road?

AR: Yeah, definitely at the beginning it was sort of a symbiotic thing. It wasn’t necessarily like ‘We have this dream of achieving fame’, it was a means to an end. We wanna travel, and we play music, so put ‘em together. So that was the M.O. at the beginning. We owned an RV and drove that to Panama, organized the shows, did the Europe trip, and that was about three years of it – being hippy tree-planter musicians.

For me, and I think for the band, when we were on tour in Europe doing the busking thing we ran into another East Van band called Brasstronaut, and they were doing a tight two-week tour in this new rented van and they had a driver, and we’re like ‘That looks pretty cool. Let’s go for that now.’

That was when we kind of shifted mentality, applied for the Peak Performance Project, got in, ended up winning second place, and then that sort of catapulted all the festival bookings and got the career going essentially.

ID: Excellent, and is it the same lineup you guys perform with the whole way? 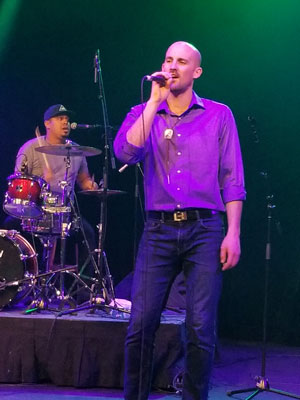 AR: Yep, we’re a five piece. For home shows – once in awhile away shows – but mostly our big home shows we’ll do horns, backup singers, percussion and stuff.

ID: Yeah, it’s a lot harder to tour with more players, especially with families at home and stuff like that.

AR: Yeah, totally. One of our guys has a baby now, and you gotta make money to be able to stay on the road. It’s tough to put enough gas in the tank with ten guys. Although Five Alarm Funk do it. [laughs]

ID: They’re machines, I don’t know how they manage it. But you guys aren’t slackers either – you just released your third full-length studio record A Million Miles last year?

AR: Yeah, we released it in the fall. We haven’t really toured the album honestly, so this will be the first official tour of the album.

ID: So you guys have gone from being a bunch of tree-planters busking and travelling in a Westy, to now; You have national coverage on Exclaim!, you’re getting shoutouts from The Junos, you’re playing festivals, you’ve got more touring to do… Aside from that change in mentality and growth that you mentioned earlier, has anything changed in The Boom Booms since the beginning?

TVD: Yeah, I think over time we’ve built a strong team. I think we did a lot of it ourselves, for a long time – from the social media, to the driving & maintaining the vehicles, to management, to booking – we sort of passed those hats around the band, but none of us actually had the time to do all that and be musicians. (chuckles) … And not be exhausted all the time.

So now we have a really kickass manager and a really kickass booking agent – Whitney Lykins is our manager and Aaron Schubert of Paquin Artists Agency, and they’re Canada-wide so that takes a lot off our plate. And I think just looking at the band as a business after a lot of years of treating it as a means-to-an-end. We used to call it ‘Investing in A Lifestyle’, to save up money working and tree-planting, and then pour it into travelling and touring. Now [the band] is a business and it’s earns more than it costs, all the numbers are there, the books are in order, and the social media is intact.

I think that was a big change, the change of mindset to treat this as a business, rather than a lifestyle choice.

ID: That sounds like it’s a pretty regular thing these days – picking up a management team. So many bands are out there because we’re in this golden age of DIY and they can tackle it all. But it gets to a point where you end up sacrificing some of that creativity, or some of that time for creation.

AR: Yeah – it’s so good to have someone in your corner. We saw our buddy Aaron Hoffman (Vernon’s SonReal) and his best-buddy is his manager, and that looked so good to us. His manager Byron is somebody that knows his passion, and is working on it together with you and is just taking care of that side of the business. Cause often, as you know, musicians don’t make the best managers.

The whole room laughs, and everyone nods in affirmation. We’re in the green room of the Kelowna Community Theatre, while other artists are in and out, snacks are being prepared, and the dull roar of a sound check can be heard in behind our conversation.

ID: So in those early days did you guys actively search for a manager.

AR: It was pretty random because when we went to Europe, in Barcelona we met a girl who lived in Miami and was taking a sabbatical from work. A few years down the road we get a message from this same girl – her name’s Isabel. She says “I’m doing shows now as a concert promoter, and I want you guys to come down and I’ll put you on some shows.” So we went down to Miami to play, and she says “I’m working with this girl named Whitney now.” So we start checking out her Facebook [laughs].

Sean and Whitney ended up hitting it off, falling in love, and she had a background in music management and marketing. She’s an all-around ambitious and smart person that really fit in well with our group. At first we didn’t want to do it – we talked about it, but specifically Sean and Whitney didn’t want to do it because they didn’t want to mess with their relationship. But as years went on and the band got more serious, we all decided and specifically Whitney did, that this could be something that works. 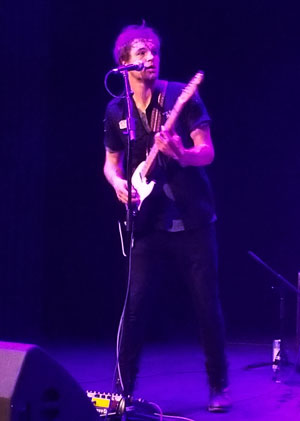 ID: So what’s next for you guys then, aside from this short tour? What’s coming down the pipe in the spring, summer and fall?

AR: We’re going out east for CMW, and then lots of festivals and gigs coming over the summer. And we’re writing a lot right now. We just want to release more music than we have in the past, so we’re writing a lot and hopefully releasing some new music this summer.

ID: That’s good news. How does the writing happen for you guys?

AR: This past year I’ve been spending a lot of time learning how to use [the production software platform] Ableton. So for this project I’m actually bringing fairly fully-formed demos to the band, and then we’re jamming them and transposing them.

ID: And then for recording, do you have a certain team or system you stick with?

AR: No, we’ve worked with different people on each project. We haven’t really talked about who we’re going to work with on the next one.

ID: There’s something to it – getting a different vibe on each album.

TVD: I definitely think it’s cool when bands and producers find that ‘match made in heaven’ thing. That’s awesome, but we haven’t found that yet. Partially because we change all the time. We’re constantly writing different music, reinventing ourselves.

ID: Since it’s Juno weekend, do you guys have any favourites for the weekend?

TVD: Jessie Reyez! She’s up for a few, and she’s dope. We know her from back in the day.

AR: Yeah, she’s from Toronto. She came and played a few shows with us in the Florida Keys, on one of those same trips to Miami. She was doing the same thing we were doing, just her on a stool with her acoustic guitar. She had some cool songs, and now here she is.

It’s really cool to see that first hand. I mean, one year you’re opening up for The Boom Booms in the Florida Keys, and next you’re on DJ Khaled’s Instagram. Which is obviously the goal of every musician out there… To be on his Instagram. [Laughs].

TVD: And not just in his DM Inbox, as an unread message. [Laughs]. 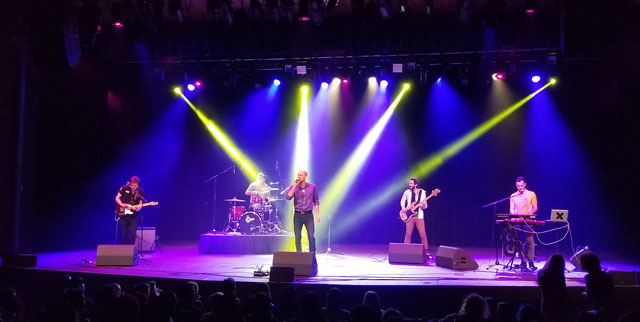 It was a great conversation with two great guys from East Van, and their music shows their character. This band is definitely a tightly-knit, and courageous family. Unfortunately shortly after this interview, The Boom Booms’ beloved Grandpa Stu passed away. The band held each other and supported each other leading right up until performance time that evening, when they stepped on stage and sang their hearts out in dedication to Grandpa Stu.

This writer doesn’t know how they did it, but the show went on and they played a great set.

Grandpa Stu remains an integral part of the band’s character, and it was a blessing for those of us at Gonzo Okanagan to meet him in this interview. We will definitely remember our short time with Grandpa Stu.

The Boom Booms are finalizing a lot of their summer dates now, and will be returning to the Okanagan to perform in Penticton this June before their festival season gets into full swing.

Check out their 2017 release A Million Miles on Spotify, Apple Music, Google Play, YouTube and anywhere you can stream or download Canadian Music!

This is Masterpiece, a selection from their 2017 release.