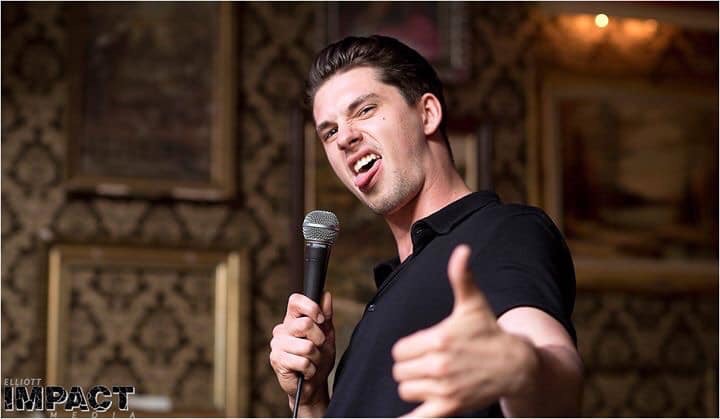 Kyle Lucey’s first attempt at standup comedy did not go well at all. That’s not a surprise considering he was only 12 years of age.

Fortunately, things have changed dramatically for one of Canada’s fastest-rising – and still youngest – full-time standup comics.

The Toronto-based comedian will be bringing his talents this coming Saturday evening as the headline performer at Dakoda’s Comedy Lounge in Kelowna.

Lucey’s show in Kelowna will wrap a brief, but busy Western Canada Headline Tour. He is playing numerous gigs in Alberta, including Grand Prairie, Edmonton, Red Deer and Calgary before heading for his inaugural visit to British Columbia and Kelowna on Saturday night.

Since watching the legendary Canadian comic Jim Carrey in his breakout role as Ace Ventura Pet Detective as a little kid, Lucey said he became obsessed with the idea of making strangers laugh.

He’s been climbing the ranks as one of Canada’s youngest full-time standup comics for the past six years.

“My first set, I was actually only 12 years old,” he said, in a phone interview while riding the bus to Calgary earlier this week. “It went so horribly, that I quit. But I realized that was a mistake and didn’t give up. At 16, I got a gig at a comedy festival opening for the Trailer Park Boys and that went much better and gave me a real shot of confidence.

“I kept doing writing and doing maybe one show a week between ages 16 and 20. After turning 20, I made the move to Toronto to pursue this full time and over the past five years, I’ve done more than 5,000 shows.”

He hired a casting agent to get him work and besides doing standup, has got work in TV and commercials.

Along with standup, Lucey has found time to act in television shows such as Discovery Channel’s Motive & Murders and Blood and Fury: America’s Civil War as well as various music videos.
Carrey, who has gone on to become one of the most successful Canadian actors and comics in history, remains his favourite comedian, said Lucey.

“After watching Ace Ventura … I realized that making people laugh is something I wanted to do with my life,” he said. “Despite that horrible start at age 12, I kept at it and I’ve managed to make a pretty good living doing what I love for more than five years.”

When asked for his opinion on the key to success as a young comic, Lucey said it basically comes down to practicing your craft and hard work.

“It’s one of those things where you get out of it as much as you put into it,” he said. “I’m sort of known as a real hard worker. I’m now known as the youngest guy to headline comedy clubs across Canada and it all comes down to hard work.

“I write at least one hour every single day. When I visit all these cities, I perform three, sometimes four shows a night. When I’m on the road, I try and line up gigs every single night.”

A child of immigrant parents, Lucey said he “grew up poor” and realized at a young age that he was going to have to work hard no matter what he chose to do with his life and that’s never changed.

“It has been pretty much up to me to make a future for myself and the kids I hope to have soon,” he said. “I’ve pretty much sacrificed my 20s to pursue my dreams as a standup.”

Lucey describes his style of comedy as being able to turn pain and hard times into something creative and funny.

“I really do consider standup comedy to be an art form … so I spend a lot of my act talking about things that torment me,” he said. “I talk about a lot of embarrassing moments in my life. I think it has allowed me to reclaim my power about these tough times by writing about it, while making people laugh.

“I had a really rough childhood and upbringing and I talk about that. I was really poor and grew up around violence, so I like to talk about the fact that even in the worst circumstances, there is a shred of light and thankfully a lot of people find that juxtaposition funny and something they can relate to.”

Life on the road as a Canadian comedian isn’t always easy, but it has allowed him to share the stage and perform with some of the best standup talent on the planet, including legendary performers like Derek Edwards, Mike Wilmot and Jeremy Hotz, said Lucey.

“Canada truly has some of the best comics in the world,” he said. “Although I’m still one of the youngest headliners in the country, I realize I’m up against giants. Working with these guys only pushes me to get better. I aspire to be great like those guys are and I want to make them laugh.”

Lucey has never visited B.C. before and said he’s excited to see all the natural beauty, while also hoping for a loud and supportive audience Saturday evening in Kelowna.

His longtime girlfriend Lauren has also never visited Western Canada and she’s jumping on a plane to spend Valentine’s Day with him Friday and will be joining him for his performance in Kelowna.

Lucey said he has every intention of making standup comedy his livelihood for as long as humanly possible.

“With social media, I get all these notices about what’s taken place in my life over the past year and I really can’t believe some of the things I’ve done and accomplished in the last year alone,” he said. “I constantly surprise myself, but again I credit it to my work ethic. I get up at 8 every morning, open my laptop, start writing material and making opportunities for myself.”

You never get tired of making strangers laugh, said Lucey.

“It’s certainly a high every single night and can say I’ve honestly become addicted to doing standup,” he said.