The first thought that crossed my mind while listening to the opening track, I knew I’d be Playing the Blues, on Kenny ‘Blues Boss’ Wayne’s new album was “man, that is smooth”! The Blues Boss takes us back to another time with his song-writing, piano skills, and a blues style that finds its way home with legends like Otis Spann and Pinetop Perkins. From smooth to hopping, the second track, Start Rockin’ really brings out the boogie-woogie. This is followed by a collection of songs, nostalgically flavored with emotion and technique, and all, as the album title suggests, inspired by the blues. 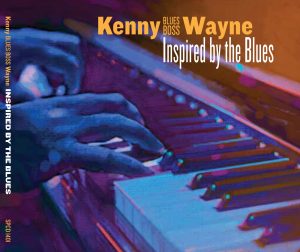 The album, Inspired by the Blues, was released on September 28 by Stony Plain Records. It is the 10th album released by the 2017 Boogie Woogie Piano Hall of Famer, Kenny ‘Blue Boss’ Wayne who now makes his home in Kelowna, BC. Special guests, Chicago harmonica player, Billy Branch, guitarist Duke Robillard, and B.B. King’s long-time bassist Russell Jackson join the Blues Boss for 11 original songs written by the Blues Boss himself. Included in the 11-song collection, is a tribute to Fats Domino, Mr. Blueberry Hill, honoring the New Orleans legend and paying homage to his memory. A bonus track of Georgia on My Mind, cut live in Mexico, is added to the album… the story behind its recording proves that music inspires, and the blues brings people closer together no matter where they live in the world.

I had a chance to sit with Kenny ‘Blues Boss’ Wayne and discuss his new album, his tour, and future plans.

Teena: At 74 years old, it doesn’t look like you will be slowing down any time soon. Tell me, what made you decide to put another album out?

Kenny: I think it keeps me young, and I just love doing it. If I stopped I wouldn’t know what to do. The old guys use to say, when you stop you will be waiting for the chariot. So, I am not going to stop, that chariot is going to have to catch up to me. (Kenny laughs)

Teena: Tell me about Inspired by the Blues, how did you choose the melody and the music for the songs you wrote?

Kenny: I am going to write as much as God allows me… I wanted to get back into some of the classic blues, but there is also a little bit of modern blues on it. I want to make sure there was a link between the classic blues, and the more modern blues. I call it ‘modern’, but it’s a R & B type of blues. Mostly my mission is to make sure people don’t forget about our forefathers who created this music. I wanted to make sure that they get some honor and respect. Of course, there is a whole list of important things that I am trying to keep alive, such as making sure the piano is right out in front.

Teena: The song Mr. Blueberry Hill, you wrote that for Fats Domino right?

Kenny: Yes, that is right. I never had a chance to meet Fats Domino in person, and I tried several times. I met people from the Neville Brothers, and I have been there (New Orleans) several times, but after (hurricane) Katrina a lot of people were displaced, so I never got a chance to meet him. He was very mysterious person after that, nobody knew how to get in touch with him, and there was no way to get any information. I saw this video of him being introduced for the song Blueberry Hill, Fats recorded it and it was a great hit, he was introduced as Mr. Blueberry Hill and received a standing ovation. That’s when I thought let’s write this song, Mr. Blueberry Hill. Well, before I was able to send it to him he passed on. I decided to put it out to the universe. I got in touch with his partner, Dave Bartholomew, who co-wrote most of his songs… maybe they would ask me to play (the song) down at the New Orleans Jazz Festival – another one for the bucket list.

Teena: You recently got back from Mexico where you recorded the bonus track on the album, Georgia on My Mind. Is there a story behind it?

Kenny: I was in Huatulco, Mexico. It wasn’t planned, it just kind of happened. Someone requested the song Georgia on My Mind, and the band I was playing with didn’t know the song. So, I played it solo. There was a group there from Estonia, and we were staying at the same hotel. They had come to the concert, one of the guys, the drummer I believe, recorded me playing the song, and when he went back to Estonia he put his band on top of it. He sent it back to me, and he said ‘what do you think of this? Is it good?’ I didn’t tell him to do this, it was his idea. I looked at it, and it was really good. You know, modern technology, drums, bass, all of it on top. I thought, wow… and it’s all mixed and mastered, so I thought you know what I am going to put this a bonus track on my album. I got back to him and said I need to know the members of the band, and let’s do a tour of Estonia. And he said ok and we can also do Finland and Denmark – well that is on my bucket list too. So, you never really know what is going to happen when you are out there, and you meet someone.

Teena: When you were a child, your father was a minister and you were in a youth choir. It has been said that you went from the Lord’s word to the Devil’s music, what is that all about?

Kenny: I was in Richmond a couple of days ago, I did a workshop there. The Richmond Virginia Folk Festival with about 200,000 people for the weekend. One of the biggest in the US. They were asking me the same thing. I told them, well, I am not going to change history, but I never meant the blues was devil’s music. In fact, music is innocent. It’s like a baby, you can teach it all kinds of bad things, or it could be healing, soothing. In the wrong hands, it could also be dangerous, but anything that gets you up and dancing and puts a smile on your face, whether it’s the blues, gospel, country, or jazz, or rap music is a good thing.

Teena: What about the devil’s high notes? What are those?

Kenny: There is a certain tradition in gospel music, it’s not the high notes, it’s the reason behind why you climb the high notes. High notes grab attention. If a woman is singing, and she hits a really high note, it grabs your attention, right? In church your attention is supposed to be for the heavenly father, and not on the singer. So, it’s an attention frequency, sometimes it can even be annoying, but it gets your attention. You don’t do that in church, in nightclubs you can do that…

Teena: What are some of the highlights in your career that stand out as great memories?

Kenny: I like traveling and I enjoy meeting different people. There are lots of great memories. I played with Billy Preston, I met Carlos Santana, the Doobie Brothers, and more. There was a real connection when I was living in San Francisco. Before that, there was Charles Mingus… which one stands out, well they are all kind of different. They are all great memories.

Teena: I know in your youth you started out in gospel music. When did you get started in the blues?

Kenny: In my earlier years I was doing a lot of R & B and Dance, it wasn’t until 1994 when I made the big change to the blues – I made the career commitment per se. I released my first (blues) record in Vancouver in 1995 (Alive & Loose), and from there I started getting some reviews, and I had never gotten reviews of my songs before. Then came interviews, and I was on the cover of a blues magazine, and I thought, ‘hmmm this is pretty nice’, and of course I got my first Juno nomination. I thought, huh… ok so the money hasn’t come in yet, but it’s looking really good (Kenny laughs). Soon after I started getting offers to perform and headline. I started looking really deep inside to figure it out, what is it that people see in me, that I don’t see. Then I realized there are not too many people around like me that are still alive. A lot of people say, why are you up in Canada, why aren’t you down in Mississippi or Alabama? I was born on the west coast and lived in San Francisco. The blues is like this, the blues is international, even Jimi Hendrix left and went to England, there are lots of blues artists that have gone to Finland, Switzerland, and some even to Japan. The blues is kind of within you, so where ever you go it is doesn’t matter.

Teena: How did you end up in Kelowna?

Kenny: My wife got transferred to the Okanagan from working for UBC in Vancouver. So that is why we are here. I like it, it has an international airport, you could fly from there to Toronto, and continue on from there. I said I am in.

Teena: I noticed you have a lot of tour dates that say ‘School of Blues’ at the Kelowna Rotary Center. What exactly is the School of Blues?

Kenny: It’s a type of jam session. I got the idea, because I went to an earlier one where they had young kids playing jazz. The last song of the night was a blues song, so I said I will sit in with you guys, and that is when I got the idea. The School of Blues is a jam, I have a harmonica player, and some other people, and we have special guests sometimes, with some history, that stop in, and you got some young kids that want to play with a bunch of old guys. I also tell some stories, since I travel lot, I always have a bunch to tell.

Teena: You said that you have ideas for your next album.

Kenny: I really want to get back to my roots. I want to do a record in Africa. I want to show a connection between African music and the music that was created as the blues. I had a little taste of that when I was in France, three or four years ago. I met a (West) African band, they couldn’t understand me, and I couldn’t understand them, because they were speaking French. But musically it didn’t matter, we still had a good time. They had different types of African instruments that they were playing, and, I thought it would be really interesting to hear the old African instruments along with the piano. That’s my idea.

Teena: Is this something you will do next year?

Kenny: If I am offered next year, I will go. We got our feelers on and we got a pretty good idea that it might be next year, or, in 2020. I don’t have a whole lot of time to be messing around. I don’t have 20 or 30 years to be figuring this out, it will have to be in the next one or two years. I am thinking very positive.

Inspired by the Blues can be purchased on Amazon, Indigo, and wherever you buy stream music.