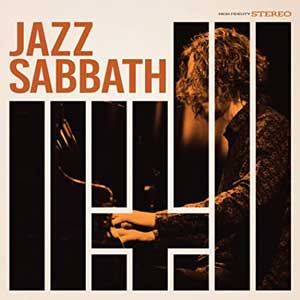 I’ve been hearing about this for a year now on a Tony Iommi Facebook fan site, thinking “Black Sabbath songs as piano jazz?  That’s stupid.”  Curiosity got the best of me, I bought the E.P. on I Tunes a couple of days ago, and I can’t stop listening to it.

Jazz Sabbath is a fictional trio claiming to be from the late 60’s, claiming Black Sabbath stole their songs as detailed in a ‘mockumentary’ last February on YouTube.  They released the Jazz Sabbath album after that, containing quite excellent versions of 7 Sabbath classics.  This is the brainchild of Adam Wakeman, son of Yes keyboardist Rick Wakeman and Black Sabbath’s touring keyboard player from 2004 to 2017.  The idea started in 2013 when, according to Wikipedia, Wakeman and a Sabbath security guard sat in the hotel bar and the guard asked if Adam could play some Sabbath tunes on their piano.  Wakeman thought it would be fun to play them as improvised jazz, then kept playing until the bar staff wanted to go home.

In the album liner notes the members of the trio are only referred to by their fictional names; Milton Keanes (Adam Wakeman, keyboards & guitar), Jacque T’fono (Jerry Meehan, upright bass) and Juan Take (Ash Sloan, drums).  What makes Jazz Sabbath work for me is a combination of two things; a love for all things Sabbath and a fondness for this type of music.  I’m not a jazzbo but this feels like a pair of soundtracks I adore; Rolf Kent’s score for Sideways starring Paul Giamati, and The Vince Guaraldi Trio’s work on A Charlie Brown Christmas TV special.

No doubt some fans hate this because of its total lack of heaviosity- thinking they’re ‘taking the piss’ as Brits might say.  But Jazz Sabbath shows the versatility of the compositions themselves in how well they stand up under such a radically different treatment.  Once I got past the daftness of the concept a delightful experience lay waiting.  Jazz Sabbath should be in every fan’s collection. 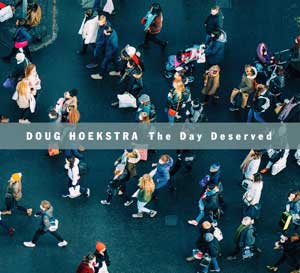 Doug Hoekstra is a Chicago-bred, Nashville-based poet/ songwriter/ performer and this is his 9th CD. The Day Deserved, his first album in over a decade, is a diverse collection of songs.  Lyrically they’re character based and reflective of these days and our times.

The short description of The Day Deserved is Leonard Cohen with a dash of Ray LaMontagne.  Hoekstra stepped away from the music biz for the better part of a decade to raise his son, work non-profit, teach, and do some prose writing.  “A couple years ago I was inspired by the influx of free time, things in our country I wanted to write about, and things I wanted to say musically, different than I had in the past” Doug says.  As he mentions in the liner notes, “this is a record intended to be a marker of the times, disenfranchised characters inhabiting the tunes, pressing on through barriers and breaks fostered by their surroundings.  Hope you enjoy and can find yourself between the notes.”

This is no dreary set of songs about how much of a challenge existence is, The Day Deserved is simply about life and many of the things that entails.  The observations of Dave Heaton from Pop Matters ring true as you listen to this disc; “when he’s carefully constructing places out of words and notes and sounds, Doug Hoekstra stumbles onto something magical, a genuine secret power music can have.”  There aren’t so many musicians who approach their work at that level, none of today’s pre-fab pop artists to be sure.  Hoesktra realizes that if a story is worth telling, he is going to use whatever is necessary at his creative disposal to get that message across.

The Day Deserved is not the kind of album I’m going to listen to every day, but there will be times when I will need what it has to offer; solace, comfort, and help in changing the way I think about things… and today, as I write this entering the second week of a 14 day Covid self-isolation and ponder my recent 63rd birthday, is one of those days. 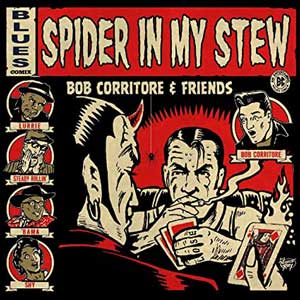 As someone who wrote radio advertising for over 20 years there are certain clichés that give me the willies; “hand crafted”, “deals” and “home style” being among them. One that really gets under my fingernails is “authentic”.  Having said that, I can’t think of a better word to describe Bob Corritore’s new album. Spider In My Stew than as an authentic, old-timey blues experience of the tallest order.

Bob Corritore is one of the most respected harp players on the scene today with an old school style of playing that takes you right back to Chicago of the 50’s.  Vintage and fresh at the same time, there are few players like him.  Spider In My Stew, recorded over 9 sessions between 2018 and 2020, involves a shit-ton of musicians riding the same grooves over these 14 blistering tracks.  The ‘special guest’ list here includes but is by no means limited to Kid Ramos, Bob Margolin, Lurrie Bell and Johnny Rawls. This disc can be best described as a blues party, the kind of fun we all want to be in on.

Spider In My Stew, produced by Corritore with Clarke Rigsby, is 14 classic numbers given a fresh coat of paint while using time honored production techniques, spiritually faithful renditions that just knock me out.  Some of the more classic numbers include Wang Dang Doodle, Mama Talk To Your Daughter and I Shall Be Released. Not sure who’s playing the guitar on Sleeping With The Blues, Johnny Rawls or Jimi Prime Time Smith, but whoever it is sounds just like BB King.

Lots of singers and instrumentalists on this album feeding each song what it requires, with Bob Corritore’s boisterous harp being the common thread.  There are no particular attempts on Spider In My Stew to modernize the blues, but rather skilled musicians playing with natural intensity, care and joy.  In this disc Bob Corritore & Friends have created something for the ages; lowdown and nasty in the very best possible way.

KEY CUTS: Tennessee Woman, Sleeping With The Blues, Whatcha Gonna Do When Your Baby Leaves You 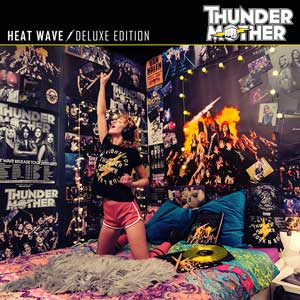 This is the deluxe reissue of a record that came out last summer.  Thundermother are a Swedish all-girl rock band that play riff-tastic AC/DC style rock & roll.  When I reviewed the original release in August I called it “real grab-you-by-the-nuts rock & roll.”  That still holds true, and this deluxe edition is bolstered by 10 previously unreleased tracks. THIS is the way to rock & roll!

The pleasures offered by Heat Wave can be physical, and I don’t mean that just because they’re hot chicks.  Guernica Mancini is a great rock shouter, the rhythm section of Emlee Johannson (drums) and Majsan Lindberg (bass) don’t piss around; they lock in and get down to business.  As expressive as Guernica is as a singer, much of the magic here is generated by Filippa Nassil’s guitar.  Her riffs are tight and to the point, the lead work adding an extra layer of excitement on top.  It would be politically incorrect to say “she’s pretty good for a girl”, and just plain wrong- she is a great rock guitarist, period.  Plus, the production of Soren Andersen is Mutt Lange-perfect.

Even if you have the original release of Heat Wave, purchasing the Deluxe Edition is well warranted.  There are songs I’ve not heard before, acoustic versions of a handful of songs from the original album, plus some live stuff too.  In fact I’m enjoying this so much I just took a quick break between paragraphs and ordered the 3 albums I don’t have from Amazon.  Hey- I live in a small prairie town with one teensy music store, I’m allowed.

Sometimes, when I put an album away for awhile then come back to it, as I listen again I can wonder what the initial excitement was about, but  Heat Wave Deluxe is an exception. When I got the download earlier today and put it on, it felt and sounded as bodacious as it did last summer.  Heat Wave Deluxe Edition isn’t out until May 21st but I couldn’t wait to spin it and tell you about it.  Consider this essential rock & roll. 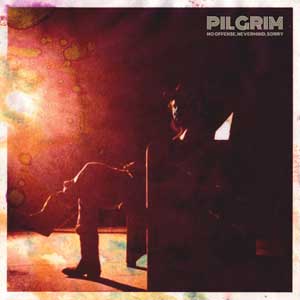 No this isn’t a Canadian album, smartass; Pilgrim, led by Beau Roberson, is from Tulsa.  No Offense is emblematic of the ‘Tulsa sound’, a laid back mix of country and folk with something of a blues sensibility.  Redemption, betrayal, loss and love- it’s all here.

What makes No Offense so deeply enjoyable is Roberson’s songwriting, each tune unfolds as an exquisitely crafted short story.  As a singer he has an expressive country-style voice that conveys the honesty and emotion of each number, the hurt, longing and regret.  That’s he’s a self-taught musician is cool too. He picked up his first guitar at 14, discovering it at his grandmother’s house after she passed away.  “I took it home, and that’s where it all started” he says. “I never took lessons, I just kind of locked myself in my room and learned to play.”  That brings a raw emotional quality to the songs, makes them feel honest, and who doesn’t like that in a roots artist?  His influences are diverse too; “the first CD’s I ever bought with my own money were greatest hits collections” he notes, “Bob Dylan and War.”  You can feel that range in his music.

No Offense was recorded at Leon Russell’s former Paradise Studio at Grand Lake in Tia Juana, Oklahoma.  With this disc you can feel what guys like Eric Clapton were attracted to in the music of Okie artists like JJ Cale and Jessie Ed Davis, an easygoing vibe that belies the depth of the stories being told.  Beau Roberson is a master storyteller and the band, known collectively as Pilgrim, underscores his profound lyrical observations with just the right musical accompaniment in any given situation- nothing too dramatic or overblown, only exactly what is needed.

If you have something against country music you might find No Offense, Nevermind, Sorry hard to get next to.  This isn’t country, not really, but that vibe is palpable.  If you have the ear and heart for engaging stories well told, you’ll find this worthwhile.

KEY CUTS: Backslider, Darkness Of The Bar, Down, Rodeo Man