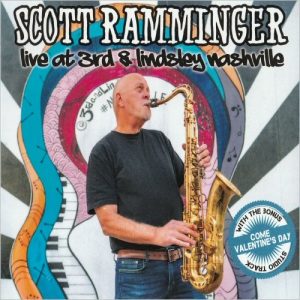 Well this is something they don’t send me every day; sax based blues. Ramminger and his band (The Temporary Condition) play regularly throughout the south and mid-Atlantic. Live At 3rd & Lindsley Nashville isn’t the hard blues, it boasts a gentle swing and easy humor & charm to make it pretty dang easy company.

As live albums go Live At 3rd is well recorded, with an almost studio-esque separation and detail to each instrument. This disc is not presented as a continuous concert with stage banter in between numbers, I would guess they recorded multiple shows then chose the best performances for the album. Scott is a good singer with a friendly sound that’ll make you think “I like this guy”. The musicianship is relaxed, confident and quite enjoyable; James Pennebaker on guitar (tracks 1-6), Joe V. McMahan on guitar (tracks 7-10), Ger Hoffman on bass and Maxwell Schauf on drums. The album also includes an 11th bonus studio track, Come Valentine’s Day that includes Muscle Shoals legends Spooner Oldham on keys and David Hood on bass, along with Will McFarlane on guitar and Doug Belote on drums.

Live At 3rd & Lindsley Nashville isn’t the type of live record to make you jump up and down with excitement, but the exceptional, laid back musicianship is extremely enjoyable as they play their blues with a wink and a smile. Downbeat Magazine says “Ramminger brings honest wit to entertaining, original songs”, and when you match that with the band’s chill approach to playing the tunes, it’s a pretty unbeatable combination. Although everyone contributes to the vibe, I have to think it’s the groove supplied by Hoffman and Schauf that really makes it all possible. Scott Ramminger & The Temporary Condition have released 6 records since 2011, so they’ve had the practice to get it down.

As noted up top, Scott Ramminger gigs throughout the south and mid-Atlantic; since I live in Northern Alberta there’s little chance of getting to see the band live, which is too bad. Those of us that can’t get to one of their shows will have to be content with Live At 3rd & Lindsley Nashville and I’m okay with that- very okay. www.scottramminger.com

HOT TRACKS: Lemonade Blues, More Than One Flavor, It’s Hard To Be Me 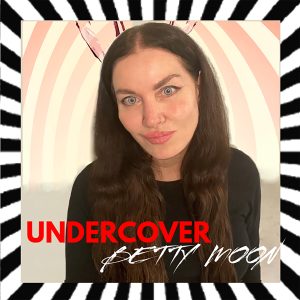 This is the LA producer/ songwriter’s 11th album. Undercover is a gathering of what she feels is some of her best cover songs, plus the new original Valentine. Entering Betty Moon’s sonic world always leaves me a little light-headed, perhaps a bit woozy, but always grateful for the experience.

Over the past couple of years Moon has stayed busy in the studio, releasing two albums (Little Miss Hollywood, Cosmicoma), as well as preparing an album to come later this year. “As I put the final touches on my next full length I was excited to let my listeners the best of my cover work as part of a collection” Betty says. “I’ve been taking things back to my roots and listening to some of my favorite artists of past to get into the vibe (of) Undercover, which I am pretty damn proud of.” She’s right to feel that way.

While I’m usually skeptical of covers albums, having heard Moon’s music before I was confident she’d do something interesting. On Undercover she gives her unique spin on originals from Royal Blood, Kate Bush, Sade, Depeche Mode, Jungle, The Rolling Stones, Stevie Nicks, Bob Dylan and Jefferson Airplane. Some of the songs I’m not familiar with but most I am, and familiarity with the originals gives you a frame of reference. Her take on The Airplane’s Somebody To Love is a muscular rock workout with psychedelic overtones, and I’m certain that if Grace Slick has heard it, she approves.

What I like about Betty Moon’s records (this is my 4th) is that they challenge me to look beyond my usual rock frame of reference, old guys playing Les Pauls or Gibson SG’s through Marshall stacks. Moon’s music draws influences from underground sounds of rock, soul, punk, electronica and electro-pop and soaks it with aggressive and empowering vibes while coming across as soothing. Her stuff has been featured on TV shows and in films, so you’ve likely heard her music before without realizing it.

A covers album is usually a stop-gap measure while an artist figures out their next move or fulfills a contract, but Betty’s next album is in the can. Undercover is a labor of love her fans will embrace as Moon pays tribute to a number of artists that have influenced her. If you looked at my record collection you’d think “he shouldn’t be into Betty Moon” but I really am, and I can’t to see what else she has for us in 2022. www.bettymoon.com 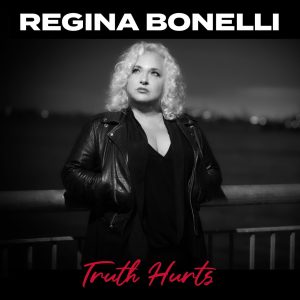 Bonelli follows up her debut, 2018’s Love Letter, with a beauty. Truth Hurts is a smoldering blend of blues and soul with funk accents that make you sit up and take notice. She has one of those voices that seems to say “come with me, I’ve got something to show you.”

Regina notes the progression between her first album and Truth Hurts. “I was very happy with the way it came out” she says of her debut, “but as time went on and we started working together more and more, I knew we could dig deeper. I think this is really the first time we’ve been able to capture the intensity of what it’s like when we play live.” Though there are some fine blues performances, overall this disc has as much if not more in common with vintage soul. It’s 9 tracks in all, 6 originals and 3 covers; Gregg Allman’s Cross To Bear, Killing Floor from Willie Dixon (the song Led Zeppelin ‘borrowed’ from for The Lemon Song) and Didn’t I, written by Daron D. Pullian.

Bonelli isn’t just a vocalist that delivers the words, she digs into the lyrics and wrings out every ounce of emotion she can. Though a white chick she’s clearly spent a lot of time listening to the black blues and soul greats. “Sometimes life deals you a hand you aren’t expecting and you’ve just got to play it” Regina observes. “When I’m singing, everything that comes out is true. It’s coming right from the body, from the inside to the outside. I write from experience; certain truths are not the most pleasant or romantic things. Truth hurts, but the truth can set you free.”

Not only does Regina sing she plays some keys here too, backed in the studio by a group of musicians referred to as “The True Groove All-Stars”, too many to mention in this review but each a groove master in their own right. Blues Matters Magazine offers this noteworthy praise of Ms. Bonelli’s gifts; “This lady has a mighty voice and can throw it like a diva… her vocals are truly majestic, reminiscent of a young Maggie Bell.” Check out Regina playing off Michael Hampton’s lead guitar in the slow burning blues Cross To Bear to see what they’re on about.

Injecting her vocals with plenty of attitude, Regina Bonelli has made Truth Hurts worth tracking down- I highly recommend giving it a few spins. www.reginabonelli.com 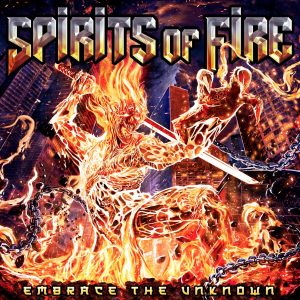 This metal super group returns with their second album and a new lead singer. Embrace The Unknown is like a collision between Judas Priest and Accept; big, meaty riffs and songs built to encourage you to outrun the law on the nearest highway.

Songwriting for Embrace The Unknown came mainly from Caffery, with Lione and producer Aldo Lonobile pitching in to deliver a set of bone crushing numbers that cross the muscle of classic Priest with the brutal finesse of Savatage, in an ‘all killer- no filler’ approach to the band’s sophomore disc. It’s often a band’s second release that determines their future… whether they stand or fall depends on whether #2 equals or surpasses the debut. I’m hearing a metal band here with plenty left in the tank.

I love the driving sound of the rhythm section of Digiorgio and Zonder on Embrace The Unknown, that low 5 or 6 string bass sound, the straightforward no-nonsense drumming with flurries of fine kick work and tempo changes to keep things interesting. In many ways this is quite traditional heavy metal- musically and lyrically- so it plays right into my wheelhouse. The riffs, while quite hefty, aren’t quite as catchy as I would like but Caffery’s guitar playing across these dozen tracks is still impressive… makes me want to dig through all those Rubbermaid bins of CD’s in my closet to see how many Savatage albums I have on hand to throw on the stereo.

HOT TRACKS: A Second Chance, Sea Of Change, Into The Mirror 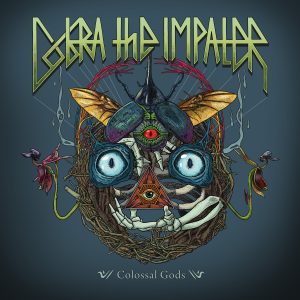 Sometimes when you put on a metal album it feels like you’ve just been boot fucked in a dark alley on the wrong side of town- but sometimes that’s just what you’re looking for. Colossal Gods, the debut from Cobra The Impaler, is just such an experience. Musically savage and unrelenting, this is just what the doctor ordered.

Hailing from Belgium, CTI’s music is along the lines of the new wave of American heavy metal. Effortlessly flowing from breakneck riffage that grooves like crazy to tasty melodic breaks, the songs on Colossal Gods combine elements of groove, thrash and classic heavy metal, and it all works together quite marvelously. I’m more of a classic metal guy, being old and white, so I was pleasantly surprised that this disc held my interest from start to finish; was not expecting that to happen.

A key track, according to the band, is Blood Eye. “Being the 2nd track on the record, we wanted it to hit with huge amounts of ferocity, catching the listener off guard” they say. “This is a song about defiance and standing up to your demons.” That spirit of standing up for yourself is pretty constant throughout Colossal Gods. While all 4 members of the band play an important role here, I must say the guitar work of Tace DC and James Falck is inspiring, somewhere in the neighborhood of spectacular.

We as human beings are creatures of habit. As I look at the music shelf to my left right now I see records by Judas Priest, Black Sabbath,, Kiss and Deep Purple. But no matter what your age, being open to new forms of expression within your preferred listening range is vital to fuel a lifelong interest in music. With that thought in mind, I wholeheartedly welcome Cobra The Impaler’s Colossal Gods into my music collection. Listening to CG tonight has been just the “don’t take shit from anybody and stand up for yourself” pep talk I seem to need right about now- might be good for you too. https://www.facebook.com/cobratheimpaler/