Home Miscellaneous Hangin’ With Satch: A Conversation With Joe Satriani 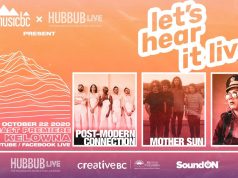 CONCERT ANNOUNCEMENT – The Show Must Go On!