Another Successful Installment of Fireside Festival Had Kelowna Smiling All Weekend

Kelowna was alive with music again this past weekend as artists from all over BC came to perform what is becoming known as the ‘Warmest Winter Festival’ in BC. The 6th annual Fireside Music Festival ran Saturday and Sunday to a sold out audience in two venues. Showgoers of all ages took in performances that ranged in genres from folky singer/songwriters to thumping DJs, from full out rock acts to some cross-genre acts as well.

Saturday afternoon at The Bean Scene downtown hosted a number of singer/songwriters and duos. These sets were added to last year’s lineup to showcase some of the more sonically gentle sounding acts in a comfortable, intimate environment. Couches were set up upstairs in Bean Scene, and the environment was a haven for some very special moments. There were silent, pindrop moments throughout the whole afternoon – particularly during Garrett Scatterty’s emotional performance at 12:40. This year’s lineup at Bean Scene was purely local, featuring favourite acts like Josh + Bex, Nathanael Sherman, and Impavid.

The kick off party went down on Saturday night at BNA, featuring a night full of DJs that included local favourites Romo, Kris Falcon, Maple Jordan and the Festival’s director Aaron Desilva. Many of the main event’s acts could be spotted out and about on the Saturday night, catching up over a couple drinks for the first time in a long time.

One of the most beautiful sides of Fireside is that it has become such a special weekend for the performing artists. I have been performing at this festival for a number of years now, and what I look forward to most is seeing some of my pals perform and catching up with them. In many cases I hadn’t seen some of the artists for a year or more, because in this industry we’re all working all over the province on the same days – thus, we don’t get to see each other perform. Fireside has provided that opportunity for us, so it’s not uncommon to see hugs and kisses exchanged, to overhear stories from the road, and see some very cool collaborations take place.

The main event started at 2pm on Sunday at BNA. As folks began to enter, Kansas Lee from Osoyoos serenaded folks with her brilliant tunes – her vocal stylings are reminiscent of Joni Mitchell, paired with beautiful active piano playing.

Curation at Fireside Festival has always been a strong point, and this year brought another great batch of artists. Curator & Director Aaron Desilva has always had a very strong local presence on his lineups, but this year he brought in some well’known names from across the province. One of BC’s most beloved acts Shred Kelly came out to play, as well as East Vancouver’s Little Destroyer. Both bands are international touring acts, and brought supremely entertaining sets to the lineup.

Some highlights of the show included the return of Speak Easy, Little Destroyer’s massive performance, the unveiling of Kelowna’s new act Kentucky Eileen, an emotional performance by Vernon’s Windmills and Mountain Sound’s incredibly bombastic set featuring a medley of Aretha Franklin’s “Respect” and their original tune “Sway.” Upstairs there was live painting going on – and local artist Ben Arcega’s moving portrait of a smiling Mac Miller stood vigil all night under beautiful studio lighting. There was no shortage of energy as music pushed into the night. Former Kelowna locals Speak Easy took it home at the end of the night with their very own brand of moody psychpop before concertgoers reluctantly embarked on their way home.

It was an amazing day filled with amazing folks. The team at BNA worked their keisters off to feed and entertain such a massive influx of people. The organizers and designers, the sound & lighting techs, and all of the support team put together an amazing festival for artists & attendees alike. Finally, the artists put together an unforgettable array of music and art for the people in attendance. This is a festival that I hope to see continue long into Kelowna’s future – and at 6 years already, the future is looking good. 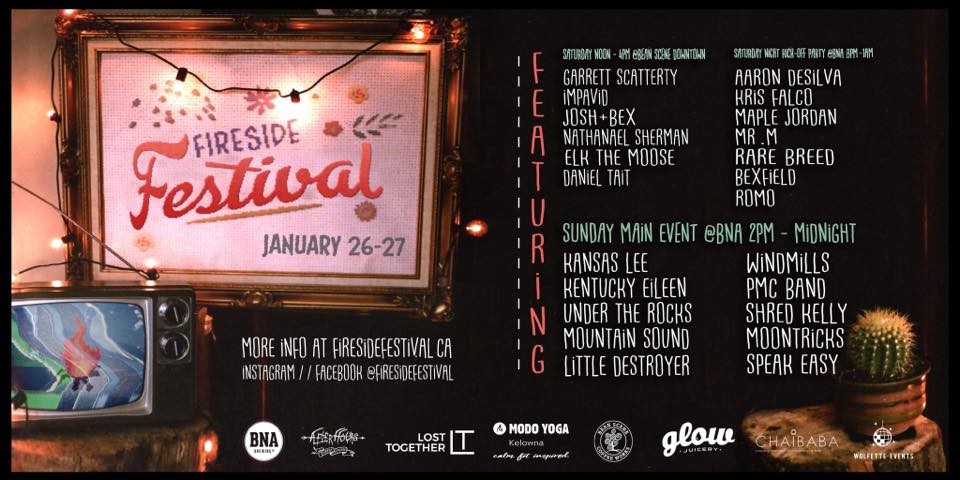